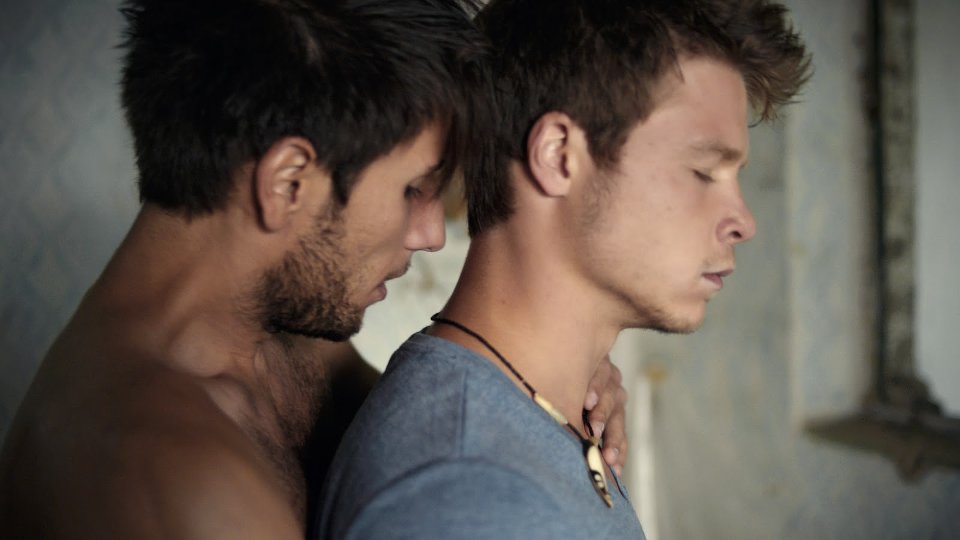 Szabi (András Sütö) is a promising football player on a German team but decides to pack it all in and head home to Hungary following a fight with his best-friend and team-mate Bernard (Sebastian Urzendowsky). Upon returning to Hungary he sets himself up in a dilapidated house that he inherited and sets about renovating it. One night he catches local boy Aron (Ádám Varga) trying to steal his motorbike and he bargains with him to help him work on the house in exchange for not turning him in for his attempted theft.

As the two work on the house together, their bond quickly grows stronger and soon Szabi makes a move on Aron that sends him into a spin. Things are complicated further when Aron confides in his sick mother about what happened, leading her to tell the whole town, and Bernard arrives with a surprising declaration of love.

Land of Storms is the debut feature from Ádám Császi and it’s essentially a coming of age story based on fact. As is to be expected there is artistic licence throughout the narrative but for the most part that strengthens the overall film. Szabi and Aron’s growing relationship is set against the very religious backdrop of Hungary allowing the film to explore homophobia in a variety of forms from verbal abuse to physical and even sexual abuse.

Whilst Szabi is the character we are initially introduced to, and who is established as the lead, it’s actually Aron whose story progresses the most. Szabi is trying to escape his own life and find happiness but his presence awakens a lot of hidden feelings in Aron. The first sexual encounter between the two leads to more intimate situations that leave Aron both excited but also deeply confused. He goes as far as to lie to his mother claiming that Szabi ‘felt him up’ without really acknowledging his own part in the situation. That starts off a chain of events that makes Aron’s life very difficult amongst the people of his town.

The arrival of Bernard provides another interesting twist. A scene early on sees Bernard checking Szabi out in the shower, which leads to a fistfight. It transpires that Bernard harbours feelings for Szabi and he declares them upon his arrival to Hungary. That adds a further complication as Szabi is forced to choose between Bernard and Aron, and Aron faces up to his feelings but possibly a little too late to be able to save his relationship with Szabi.

Along with strong direction and writing, Land of Storms boasts very strong performances from its cast. András Sütö gives a breakout performance as Szabi forming a fantastic chemistry with Ádám Varga. The two positively sizzle together on the screen and the scenes they share together are the best in the movie. Both actors are very talented and they bring their characters to life in believable ways. It doesn’t hurt that both are easy on the eye too.

Land of Storms is a moving and emotive coming of age story. The slow build arrives at a shocking and tragic climax that you won’t see coming. The film is beautifully filmed and directed, and it hits you in all the right places. It’s also a timely reminder of how lucky we are to live in a country where homosexuality isn’t the taboo it once was. Land of Storms is a stellar movie and we heartily recommend it.

Watch the trailer for Land of Storms below: