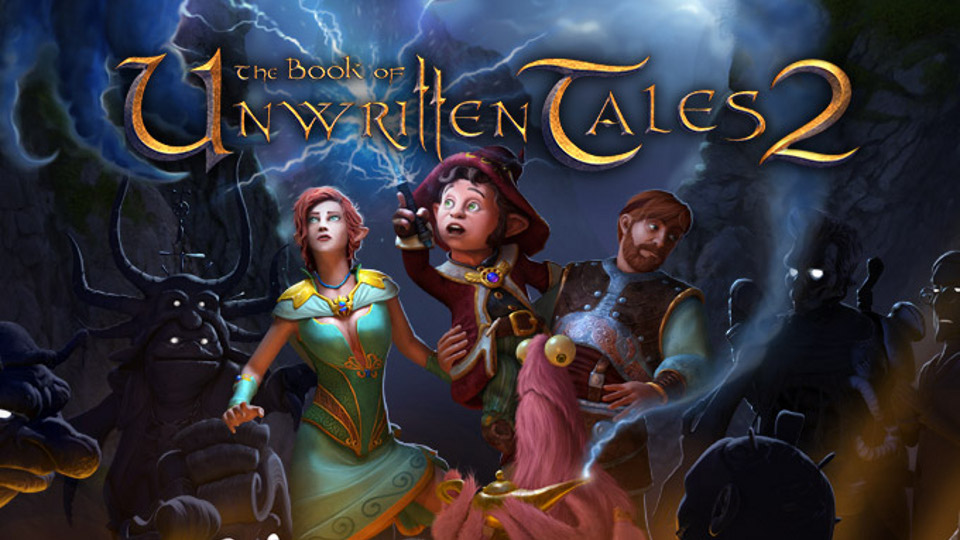 After a successful first outing with The Book of Unwritten Tales the developer, German-based KING Art, followed the game up with a prequel. The Critter Chronicles was a prequel and went back to explore the lives of the main characters before the events of the first game.

The Book of Unwritten Tales 2 is set after the original game. For the sequel the developers took to Kickstarter to seek funding to help development and also to involve the community. The campaign was very successful and almost managed to triple their initial target.

Like the previous games the action is again set in the world of Aventasia. This time the land is threatened by a strange magic that is turning everything into a sugary fantasy world for little girls.

The four heroes, Wilbur the gnome mage, Ivo the elf princess, Nate the adventurer and his pink furry companion Critter, all return. They start off separated and each have their own problems to overcome. Eventually they come back together and the character switching gameplay returns.

Something else that returns is the humour and spoofing of other games, fantasy novels and movies. The game is absolutely crammed with often hilarious references and half the fun is spotting them all. For example early on you come across a room that has a Portal cube and a sword rack with iconic gaming swords such as the Minecraft sword and Cloud Strife’s Buster sword from Final Fantasy VII. There’s plenty of other references for the likes of World of Warcraft, Game of Thrones, Discworld, Harry Potter and Lord of the Rings.

The game is a classic point-and-click adventure where you use the mouse to interact with the environment and guide your characters. Clicking on objects will get your character to look at or use them. They will always do the most obvious action so there is no need for lots of different commands that games like Monkey Island used to have.

One feature that players will love or hate is the ability to press the spacebar to highlight objects of interest. When you do this every item on the screen that you can interact with is highlighted. This is great for new players but more experienced adventurers might find it feels a bit like cheating. The nice thing is that it’s completely optional so you can use it as much or little as you like.

No adventure game would be complete without puzzles and The Book of Unwritten Tales 2 doesn’t disappoint. While veteran players will have an easier time players of all skill levels are in for a treat with some really inventive puzzles. Many aren’t immediately obvious and have seemingly crazy solutions but when you really think about them they all seem quite logical.

In addition to the main story the game also features a bunch of optional side quests. We’re not sure we’ve seen this happen in a point-and-click adventure before and it’s a great idea. Doing these quests rewards you with achievements and outfits for your characters.

Graphically the game looks gorgeous with incredibly detailed environments and characters. The developers have made use of a special technique called projection mapping to help with the environments. This allows them to use a much less detailed model of the environment but then map a high detail texture over the top. This gives the impression of a lot more detail and keeps the performance high. It also allows them to use a dynamic camera which makes the scenes look a lot more alive.

So many games are let down by poor voice acting but we’re happy to report that this isn’t an issue in The Book of Unwritten Tales 2. The voice cast is excellent and they all put in brilliant performances. The great voice work really brings the characters to life and enhances both the story and humour. Similarly the music is lovely thanks to the help of a live orchestra.

During our time with the game we did encounter a few bugs. Some were fairly minor such as one where picking up a painting seemed to anchor it to Ivo’s arm and then it followed us around for several minutes. A far more serious one caused the game to refuse to let us do what was required of us which prevented us from progressing. No amount of reloading helped and in the end we were forced to start the game again. Fortunately it happened quite early on so wasn’t a huge issue but it did let us waste plenty of time wondering If we were just doing something wrong. Thankfully the developers have been patching the game since launch and many issues have now been resolved.

The Book of Unwritten Tales 2 is a fantastic adventure game that is sure to please fans of the series and newcomers alike. Whatever your skill level there is a good 20 hours plus of game here. It’s easily one of the best adventures that we’ve played for quite some time.