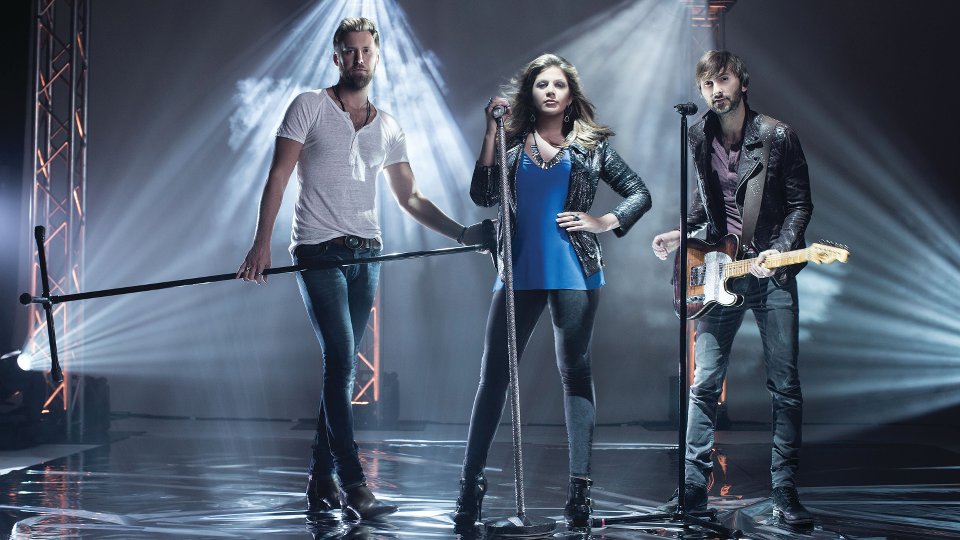 Lady Antebellum is the face of modern country music around the globe. We’re fairly certain that if you asked someone outside of the US to name a country act, Lady Antebellum’s name would be the one they’d give you. With that in mind it’s surprising that they haven’t been part of C2C: Country To Country before now. The trio performed at the launch party for the 2015 festival last year, tying it in with the release of their latest album 747, and last night they took to the C2C stage for a headline performance that closed this year’s festival.

The band – Charles Kelley, Hillary Scott and Dave Haywood – arrived on stage around 8.45pm and kicked off with Bartender, one of the singles from 747. That kicked things off on an energetic note and the band moved straight into Long Stretch of Love, their brand new single, keeping the audience on its feet and singing along.

Lady Antebellum’s set was a mixture of songs from across their entire catalogue going back to the start with gems such as Love Don’t Live Here and Lookin’ For a Good Time, and keeping things current with tracks such as Lie With Me and Just a Girl. The magic happens with the band when Charles and Hillary harmonise and they did that plenty of times over the set. Just a Kiss sounded stunning as did fan favourite American Honey.

The highlight of the performance was an acoustic version of One Great Mystery, which is one of the standout tracks on 747. The band’s harmonies sounded tighter than ever and Hillary stole the song with her flawless vocal. The track is an emotive one about finding ‘the one’ and it sounded beautiful last night.

Elsewhere in the set the band covered Kenny Rogers and Dolly Parton’s Islands in the Stream, and kept things acoustic for a medley of Dancin’ Away With My Heart, I Wanted You More, Goodbye Town and Hello World. They brought their headline performance to a close with a cover of Avicii’s Wake Me Up mashed up with Cups (When I’m Gone) from the movie Pitch Perfect.

Of course the moment the audience responded to the best was Need You Now. That is the song that was responsible for launching the band on a global platform and if they’re sick of singing it all these years on, they showed no signs of that. It was the loudest sing-a-long moment of the entire weekend.

Lady Antebellum is such a tight live band and they were without a doubt one of the highlights of the entire C2C weekend. They were definitely the best performance of Day 2 and they sure know how to entertain. Throughout the set they were clearly having a lot of fun and they interacted regularly with the audience to express their surprise at the love they receive from the UK. There’s no doubt that Lady Antebellum are one of the acts responsible to pushing country music around the world and their live performance at C2C reinforced what a class act they are.

Advertisement. Scroll to continue reading.
In this article:C2C, Country to Country, Lady Antebellum