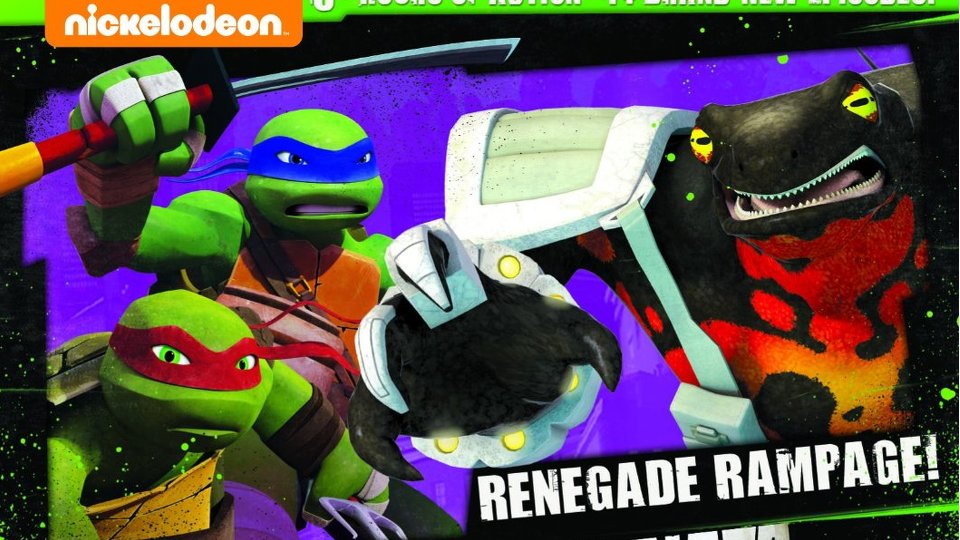 Nickelodeon’s animated reboot of the Teenage Mutant Ninja Turtles has proven to be a huge success. The series made its debut in 2012 with big name stars Sean Astin (The Lord of the Rings) and Jason Biggs (American Pie) amongst the voice talent. The last volume released on DVD featured a selection of season 2 episodes ending with Of Rats and Men where Splinter had to overcome the threat of the Rat King, one of his most feared enemies.

Teenage Mutant Ninja Turtles is back for a double dose with volumes 3 and 4 packaged together for a new DVD release. Comprising of the second half of season 2, the DVD release features Renegade Rampage (volume 3) and Into Dimension X (volume 4). The disc opens with the two-parter The Manhattan Project, which sees the return of Shredder with a new assassin called Tiger Claw and a Kraang plot that’s causing earthquakes in New York.

The 14 episodes featured on this release continue the central season 2 themes of the Kraang and deliver plenty of other foes and challenges for the Turtles. One of the standout episodes on the release is The Lonely Mutation of Baxter Stockman. The episode pays homage to classic horror movie the fly when Shredder turns Stockman into a fly for his many failures and as an act of revenge he kidnaps reporter and Turtles aide April O’Neil as a trade for the retro-mutagen that the Turtles possess, which can restore him back to normal.

Elsewhere across the episodes the Turtles’ favourite food pizza starts to turn people into zombies in Pizza Face including the Turtles themselves leaving only Michelangelo uninfected and having to save the day, Plan 10 sees Raphael accidentally switch minds with a Kraang, and the two part season finale The Invasion finds Shredder and the Kraang joining forces in a plan to take over Earth.

Teenage Mutant Ninja Turtles Season 2 Vol 3 + 4 continues to bring the Turtles to a new generation and the characters are experiencing a renewed surge of popularity thanks to last year’s live-action movie. The Nickelodeon series for the most part stays true to the classic series marrying humour with plenty of action. There’s no doubt this series is aimed at the younger viewer but long-time fans of the Turtles should find plenty to enjoy here too.

These 14 episodes are definitely entertaining and dare we say much better than the attempted live action reboot last year. Whilst that film was a commercial success it was a critical failure but a sequel has already been given the greenlight. If you’re a Turtles fan we’d point you to this series as a way to get your regular fix of the popular animated heroes.