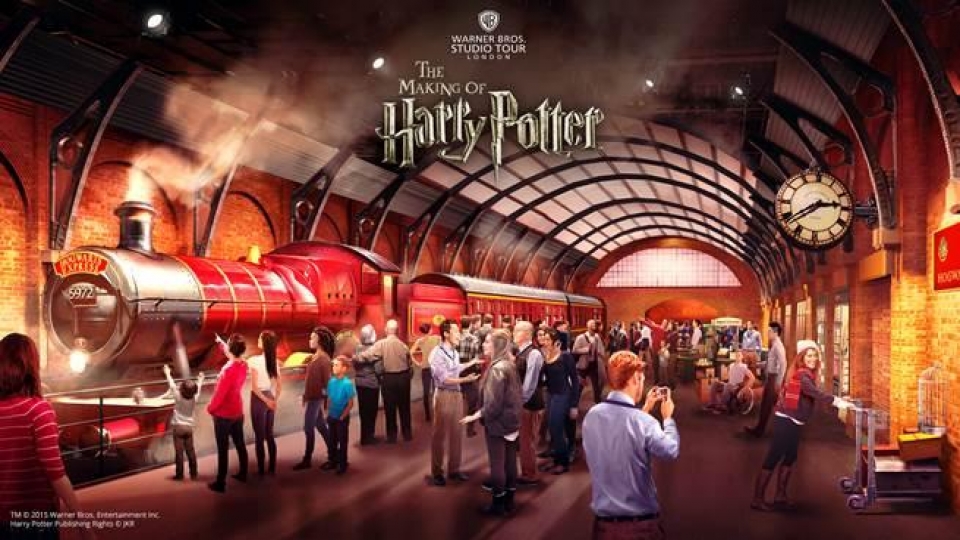 In March, The Warner Bros. Studio Tour London – The Making of Harry Potter will unveil an expansion, including the original Hogwarts Express steam engine and a recreation of Platform 9 ¾.

The new, permanent section of the tour will offer a glimpse into how some of the films’ most iconic scenes were created. Visitors will get the chance to climb aboard the train’s carriage and to pose with a luggage trolley as it disappears through the platform wall.

Throughout the Harry Potter film series, British steam train no. 5972, ‘Olton Hall’, was used as the Hogwarts Express. Scenes featuring the working engine – including the very last scene to be shot, in which a grown-up Harry, Ron and Hermione wave their own children off as they head to school – were filmed on a soundstage at Warner Bros. Studios Leavesden and on a track running the full length of the Studios’ 100-acre backlot. The 78-year-old red engine will return to the series’ production home this spring and will be displayed on a realistic set of tracks, with steam billowing as visitors step onto the platform.

Officially opening on Thursday 19th March, the new, must-see section has been redesigned and will be built by many of the crew members who worked on the most successful film series of all time. Every inch of the platform’s glass roof, yellow brick walls and luggage racks, designed by Oscar® and BAFTA winning Production Designer Stuart Craig, will be painstakingly reassembled by a team led by Construction Manager Paul Hayes and dressed by Set Decorator Rosie Goodwin. Oscar® and BAFTA winning Special Effects Supervisor John Richardson will rig the locomotive with special effects steam.

Visitors will be able to walk along the train’s adjoining carriage and sit in the interior carriage set that was used during filming (complete with ‘windows’ that demonstrate the process used to create iconic train scenes from the films such as the escape of Harry’s first Chocolate Frog and the Dementor attack). A selection of prop luggage will be on show and visitors can find out which character owned which items by turning an interactive dial (characters include Hermione Granger, Draco Malfoy, Luna Lovegood and more). A train-themed souvenir shop will also be open on the platform, stocking a wide range of goodies inspired by the Harry Potter films and, specifically, the Hogwarts Express.

Sarah Roots, Vice President of Warner Bros. Studio Tour London, commented: “We can’t wait to open our first expansion, Platform 9 ¾, just before the Studio Tour’s third anniversary in March. The Hogwarts Express had a starring role in the films so we’re excited that it will be taking centre stage in the new area. It’s the piece that visitors have most requested to see and we’re expecting a fantastic response.”

Stuart Craig, Production Designer on all eight Harry Potter films, added: “The Hogwarts Express was the setting for many iconic scenes, from Harry, Hermione and Ron’s first meeting in Harry Potter and the Philosopher’s Stone to the moment the trio’s children embark on their first journey to school 26 years later. The wizarding world doesn’t have a need for modern technology so we knew a traditional steam engine would make the perfect school train. Before we began filming in 2000, we scoured the country and found ‘Olton Hall’ at a preservation centre in Lancashire; realising pretty quickly that it was exactly what we had been looking for.”

The new Platform 9 ¾ section, featuring the original Hogwarts Express, will open on Thursday 19th March and entrance will be included in the standard ticket price.