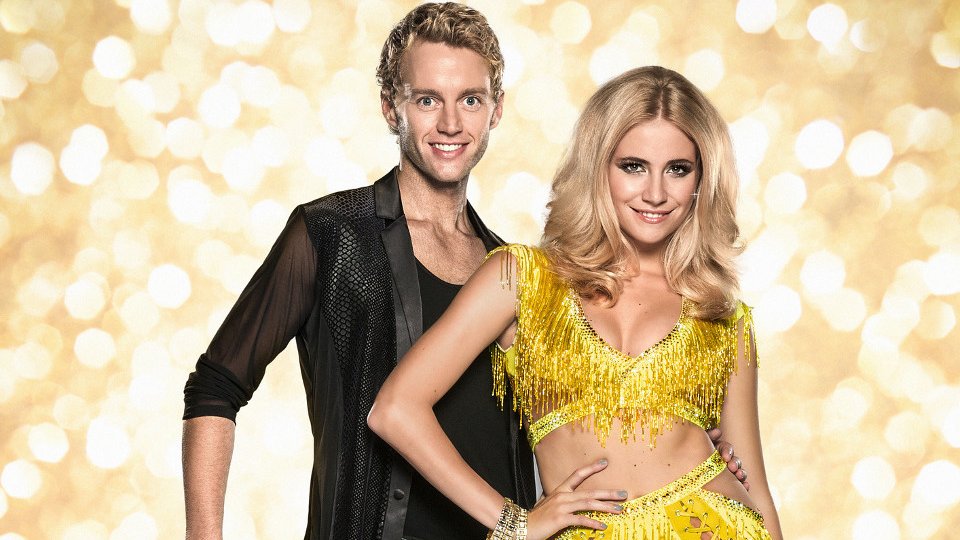 The capital of Ballroom dancing hosted the remaining 9 couples as they danced their socks off to stay in the competition. Tomorrow night one couple will be leaving the competition and it’s down to the viewers at home to save their favourites.

Zoe Ball co-hosted the show again tonight with Tess Daly as she stood in for Claudia Winkleman.

The Saturdays’ singer Frankie Bridge got quite a mauling from the judges which left her in tears. Craig Revel Horwood told her it was her worst dance yet. We thought she did a great routine! Tonight Frankie and her partner Kevin Clifton danced the Quickstep tonight and they got into the spirit by heading to the arcades to play a dancing game.

The dance: A cracking start to the show. Frankie and Kevin got a standing ovation from the audience and they definitely got the party started tonight. They really used the size of the dancefloor and technically it looked pretty strong to our eyes.

The comments: Len said he was excited to watch the routine and told Frankie it was a ‘kick me Quickstep’ and her best dance. Bruno said Frankie and Kevin flew across the dancefloor and told them they didn’t put a foot wrong. Craig said he thought they used the floor well but told Frankie she lost her frame slightly. Darcey said it was ‘a frantic rocking Quickstep’ and commended Kevin’s choreography.

EastEnders star Jake Wood hasn’t had a good couple of weeks on Strictly. After starting off so strongly he’s struggled to maintain the high standard he set and last week’s Rumba didn’t impress the judges. This weekend Jake and his partner Janette Manrara danced the American Smooth Foxtrot. Did he get his mojo back?

The dance: Now that was more like it Jake! It seems the bright lights of Blackpool have inspired the actor and that was his best dance in weeks. Clever choreography and great tricks. We liked it!

The comments: Bruno called Jake ‘the original smooth criminal’ and told him it was plotted dramatically. Craig said that he saw artistry in Jake’s hands and called the performance ‘Herculean’. Darcey said it was ‘stylish and sophisticated’ and told Jake he was the pro in the dance. Len said that Jake put the ‘oo’ in ‘moody’ and told him that he’s back in the competition.

Sunetra Sarker made a fair amount of mistakes last week and she put it down to nerves in her VT tonight. This week in training Brendan Cole took Sunetra out to get in the mood for her Samba. Sunetra really needed to pull it out of the bag tonight if she wants to stay in the competition.

The dance: Well we liked the hen night theme which really took advantage of the Blackpool setting but we weren’t overly keen on Sunetra’s performance tonight. It was a messy Samba and Sunetra is definitely better in the Ballroom.

Blue star Simon Webbe brought his A game last week and proved that he can deliver on the dancefloor. He avoided the bottom two again and scored an impressive 33. Tonight Simon and his partner Kristina Rihanoff danced the first Argentine Tango of the series. Did he deliver once again?

The dance: Bravo to Kristina for that choreography! Simon seems to be on a roll and those lifts were fantastic. The audience gave a standing ovation and we think Simon did a great job leading that difficult routine.

The comments: Darcey said that Simon set the standard very high and called him ‘passionate and intense’. Len said ‘winner winner chicken dinner’ and was lost for words. Bruno said Simon was masterful and told him the climax was spectacular. Craig said it was a little bit stiff in places and told Simon he had hands like ice cream scoops.

We’re still absolutely baffled as to why on earth Judy Murray is still in the competition. We can only think that the public are voting for Anton Du Beke as Judy’s ‘dancing’ has been non-existent. Tonight Judy ‘danced’ the Viennese Waltz. Did she actually remember the steps?

The dance: Production over ability once again from Judy. We have nothing else to say about that performance.

The comments: Len said it was ‘light and fluffy’ but ‘a little bit sticky in places’. Bruno said the dance was actually recognisable as a Viennese Waltz but called Judy ‘Mary Sloppins’. Craig said it all went horribly wrong at the very beginning. Darcey said that Judy needs to keep working on her top line but agreed it was probably her best dance.

Mark Wright has really found his mojo the past few weeks and he’s emerged as a real contender in the competition. He’s proven himself in both Latin and Ballroom and we think he’s definitely the dark horse of this competition. Tonight Mark and his partner Karen Hauer danced the Charleston.

The dance: That was a really fun Charleston. Mark really throws himself into the more energetic routines and he was perfectly in sync with Karen. We loved it!

The comments: Bruno said he likes a man with plenty of tricks up his sleeve and told Mark he can’t believe how far he’s come. Craig said he’s starting to fall in love which prompted Mark to kiss him! Darcey said she sees more strength in him every week and told him she loves him. Len said he agreed with everything the judges said ‘with knobs on’.

Pixie Lott topped the leaderboard last week with her partner Trent Whiddon. She scored a 10 from Darcey which has boosted her confidence. During the week Trent took Pixie to one of Blackpool’s piers to show her the delights of the seaside town. Tonight Pixie and Trent danced the Paso Doble.

The dance: That was a fast and furious Paso from Pixie and Trent. The production and the choreography were fantastic and Pixie danced her socks off.

The comments: Craig said that Pixie was a force in the competition and told her she is almost invincible on the dancefloor. Darcey said Pixie couldn’t be better calling it a ‘brilliant brilliant performance’. Len said that if Pixie was a stick of rock she’d have talent written through her. Bruno said the substance in the Paso Doble was spot on and called Pixie’s performance ‘perfection’.

Steve Backshall was criticised for being too aggressive during his Paso Doble. Regardless he was happy with his performance and tonight he danced the American Smooth with his partner Ola Jordan. During the week Steve observed the pro dancers in their ‘natural habitat’ using his naturalist skills.

The dance: That was a more restrained performance than last week.

The comments: Darcey said that Steve kept his cool throughout the routine and commended the lifts. Len said that Steve showed his gentler side and told him to get up on his toes like ‘a small man at a urinal’. Bruno said Steve was ‘rolling along very nicely’ and told him he controlled his strength. Craig said Steve showed control in the lifts but told him to get his thumbs sorted.

Last to dance tonight was TV presenter Caroline Flack and her partner Pasha Kovalev. Caroline ended up in the bottom two last week but managed to keep her place in the competition when the judges sent home Alison Hammond. Tonight Caroline and Pasha danced the Jive.

The dance: That was an energetic and fun way to end the show. Caroline was on form again this week and we thought that was a really strong Jive. We liked the nod to the Spice Girls too with the Union Jack dress.

The comments: Len said that he would dive off the pier naked if Caroline ended up in the bottom two again this week. Bruno said ‘yes, yes, yes my darling’ and called her ‘the best of Brittania’. Craig said it was ‘sharp and clean’ with ‘military precision’. Darcey said it was very impressive.

Tune in to Strictly Come Dancing 2014 tomorrow night at 7.15pm for the results. See all of the couples in rehearsal in our gallery below: