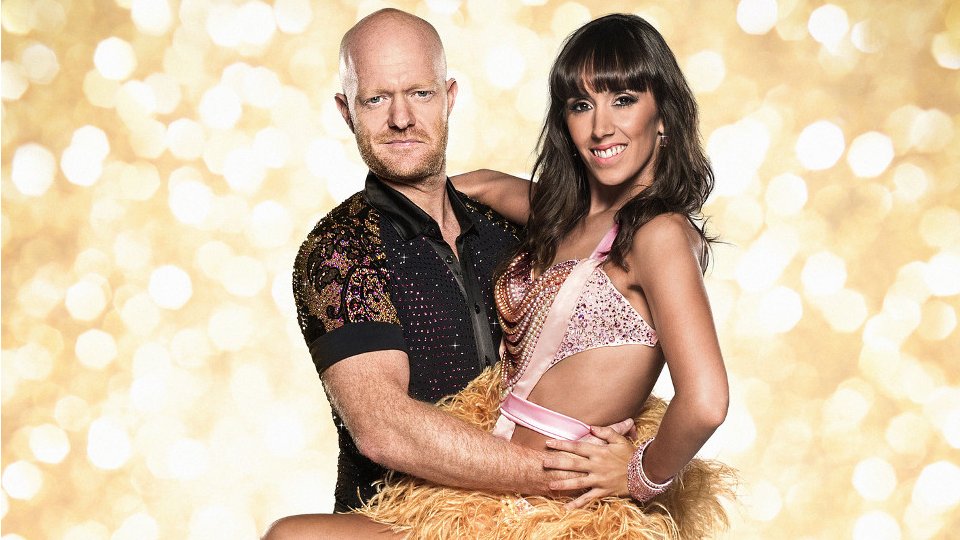 Halloween Week on Strictly Come Dancing 2014 delivered plenty of treats and also saw Scott Mills’ luck run out as he was eliminated from the competition.

Alison Hammond and her partner Aljaz Skorjanec found themselves in the bottom two for the first time but survived to dance another week. Tonight the remaining 10 couples danced their socks off as they tried to secure their place in the competition ensuring they sail through to Blackpool next week.

Tess Daly was joined once again by Zoe Ball on tonight’s live show as Claudia Winkleman had to miss her second show of the series due to her daughter being injured last week.

Blue star Simon Webbe has been in the bottom two twice this series but last week despite an error in the middle of his routine, he managed to stay out of the bottom two. The pressure was on in training as Simon and his partner Kristina Rihanoff desperately want to get through to Blackpool. Simon visited his mum during the week for extra support but did it do the trick? Tonight Simon and Kristina danced the Quickstep.

The dance: What an opening to the show. We think that was Simon’s best dance yet and if that doesn’t get him through to Blackpool nothing will. It was fast, fun and his personality shined through.

The comments: Len told Simon he’s heading straight to the Golden Mile in Blackpool and said he loved ‘the energy and the commitment’. Bruno said Simon gave plenty of Razzle Dazzle tonight and told him it’s good to see him having a good time. Craig told Simon that his head placement and posture could have been better but said Simon is becoming a ‘serious contender’. Darcey said that Kristina’s choreography was impressive and told Simon he made a hard dance look easy.

Last weekend Caroline Flack was told that she was over-rehearsed last week which took away from the feel of the Samba. In training this week Pasha Kovalev and Caroline’s nieces and nephew tried to help her find her inner princess. Did the tomboy manage to pull it off on the night? Caroline and Pasha danced the Waltz.

The dance: Oh Caroline! It was all going so well until that stumble at the end. It’s not Caroline’s best dance but it’s not her worst either. Well danced but not the most memorable performance.

EastEnders actor Jake Wood may have peaked early in the competition. Expectations have been high since he danced an incredible Salsa in week 2 but he’s never matched that performance since. Last week’s Paso Doble wasn’t well received by the judges. This week Jake and his partner Janette Manrara danced the Rumba.

The dance: Hmm. Something was lacking in that dance for us. The Rumba is supposed to be passionate and romantic. We didn’t get either of those things from that performance unfortunately.

The comments: Craig said Jake’s hand shaping was bad and told him that the performance was too safe and too subtle. Darcey said that she was impressed but told Jake to lift his head more throughout the dance. Len said that Jake was ‘all at sea’ with his arms and his hands but remarked that people don’t understand how difficult the dance is. Bruno said the performance was a bit too jagged but told Jake it was ‘a brave attempt’.

Who is voting for Judy Murray? Seriously?! She’s not made it through one single routine yet and still she’s in the competition. Last weekend Judy’s American Smooth failed to impress anyone but apparently the public still voted for her. During the week Judy was visited by her son Andy as she trained for her Paso Doble. Did Judy finally do Anton du Beke proud and finish a routine?

The dance: Once again Judy’s lack of ability was covered up by production and Anton’s choreography. We’re bored of Judy now. Please, please, please don’t vote for her this week and let the show concentrate on the dancing talent.

The comments: Darcey said that Judy is a strong lady but that the strength doesn’t extend to the moves. Len said that Anton had done ‘two months hard labour’ working with Judy already. Bruno said Judy breaks every rule and ‘reimagines dance as we know it’. Craig said it was very pedestrian and told Judy that she walked her way through the routine.

Last week Casualty star Sunetra Sarker opened the show with her partner Brendan Cole. The Jive wasn’t her best dance but it wasn’t her worst either. This week Sunetra invited her Casualty cast mates to training for a bit of a boost. Tonight Sunetra and Brendan danced the Foxtrot. Did she get her mojo back?

The dance: A better performance from Sunetra tonight. She’s definitely more at home with Ballroom and she has a natural grace that helps her to glide across the dancefloor. Not quite her best but a vast improvement on last week.

TV presenter Alison Hammond ended up in the bottom two last week with her partner Aljaz Skorjanec. The judges chose to save her and sent home Scott Mills and his partner Joanne Clifton. During the week Alison and Aljaz went bowling with Alison’s son to enjoy a bit of free time. Tonight Alison and Aljaz danced the Charleston.

The dance: What a fun routine. Alison was back at her best this week. We know that she’s not the strongest technically but we loved that performance. Alison’s personality shines through every single time she dances.

The comments: Bruno said Alison is vivacious and has an affinity for slapstick. Craig said he enjoyed the routine calling it ‘stylish and chic’ but told Alison it was the best technical routine. Darcey said she enjoyed it and noted the improvement in Alison’s strength. Len said it was right up Alison’s alley and told her ‘well done’.

Mark Wright has come out of nowhere to blow the socks off the judges the past two weeks. Last week Mark and his partner Karen Hauer came second on the leaderboard and was told he had done his best dance yet. This week Mark was tackling the Waltz but could he manage a hat-trick of good scores?

The dance: Beautiful! What a romantic Waltz. Mark is proving to be one of the best dancers in the competition and his progression is really impressive. Great choreography from Karen.

The comments: Craig said it was romantic and told Mark he really enjoyed it. Darcey said that Mark is becoming an expressive performer and told him she was very impressed. Len said the swing and sway was lacking but he told Mark his footwork was terrific. Bruno said that Mark had his wedding dance sorted and told him he’s ‘a keeper’.

Frankie Bridge is going to have a hard time topping last week’s Wicked themed Tango. She got the first real 10 of the series and landed at the top of the leaderboard with her partner Kevin Clifton. During the week Frankie took Kevin to Majorca as she had a show with The Saturdays. Tonight Frankie and Kevin danced the Samba.

The dance: Well that was definitely a party dance. Frankie looked confident and she moved around the dancefloor with ease. That was a very, very good Samba!

The comments: Darcey said there was an extraordinary amount of dance content but told Frankie she did struggle in a couple of places. Len said it was a very fast routine and told Frankie he liked the speed at which she recovered from her mistakes. Bruno said Frankie tried to keep up with Kevin and that the routine lacked precision. Craig said ‘it’s your worst dance yet’.

Popstar Pixie Lott had a good week last weekend with her partner Trent Whiddon. During the week Pixie was visited by her grandfather who spurred her on in rehearsal. Tonight Pixie and Trent performed the Foxtrot.

The dance: We weren’t as blown away by that as we expected to be. It was nice enough but a good effort.

The comments: Len said that it was a charming dance. Bruno called Pixie ‘a housewife superstar’ and called it ‘refreshingly original’. Craig called it ‘gorgeous’. Darcey said ‘even more gorgeous’ and told Pixie she ate up the dancefloor.

Last up tonight was Steve Backshall and his partner Ola Jordan. It’s safe to say that last week’s performance was an absolute mess and Steve was lucky that he stayed out of the bottom two. Tonight Steve had a lot to prove to get back up the leaderboard and prove that he has what it takes to stay in the competition. Tonight Steve and Ola performed the Paso Doble.

The dance: Steve is back on form! That was much better than last week. Powerful and aggressive!

Strictly Come Dancing 2014 continues tomorrow night at 7.45pm on BBC One as another couple departs the competition. Take a look at all the couples in rehearsal earlier today: