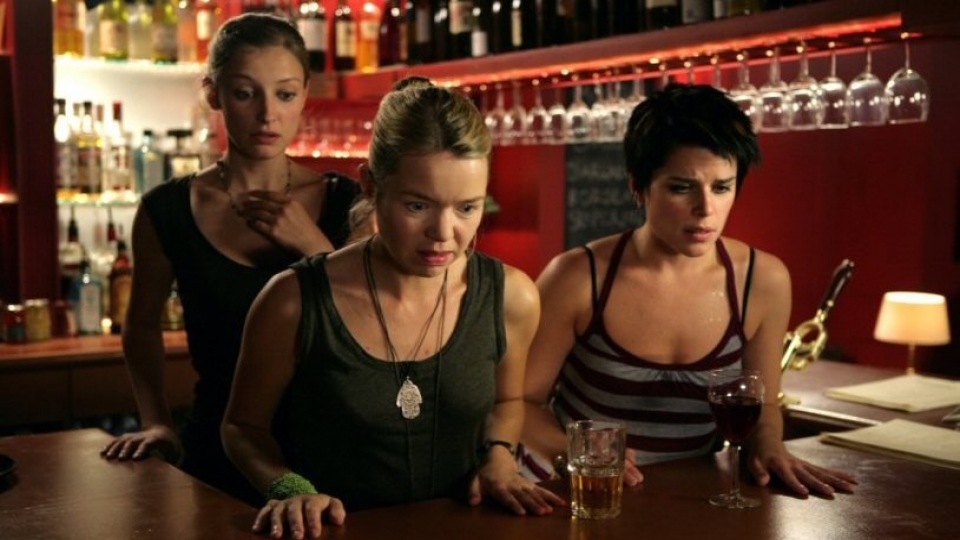 Alice (Shirley Henderson) is an aspiring writer currently working in the kitchen of a small cafe in London’s Soho. She finds the chef is blind drunk before they have even opened the doors for business so agrees to take over for the evening. Front of house are Abi (Neve Campbell), Suzie (Alexandra Maria Lara) and Madonna (Anna Maxwell-Martin). Over the course of the evening chaos ensues thanks to rats, full blown arguments, burnt food and the arrival of a Hollywood movie star.

I Really Hate My Job was made in 2007 and only now is it making its way onto the home entertainment platform. That doesn’t necessarily mean it’s a bad film and that nobody wanted to release it, in fact this seems a strange case of the movie being left in limbo for so long that people have almost forgotten about it. This is a real shame as it’s a nice light-hearted flick that gives an interesting character study.

We are introduced to each character slowly as we get to grips with their role in and outside of the cafe. Fun and frolics are the order of the day for quite awhile but once the shouting and angst start,s that is when the film tries to become serious and more emotional. It manages to hit those points occasionally yet still feels light and fluffy for most of the film. It never grabs the characters by the scruff 0f the neck. We felt it needed to be harder on most of the girls as they bicker and bite their way through the night.

At the time of filming, only Never Campbell was the famous one in the group. But watching it now each of them has made their own way further into the industry. Shirley Henderson actually steals the film with her soft-hearted yet manic depiction of a women without a clue what to really do. She wings it throughout and its fun to watch her do it. The front of house ladies are more the focus and whilst each have a good time in their roles, the film will be remembered purely for the fact that Neve Campbell strips off during a full dinner service. There is no build up and it’s a shock to see, but that shakes the relationships up a bit.

I Really Hate My Job is fun and fancy-free with some often hilarious service-industry insider jokes. Yet it doesn’t hit the characterization quite deep enough to see what the filmmakers were trying to aim for in the females. But that said, it’s still an enjoyable yarn.

In this article:I Really Hate My Job