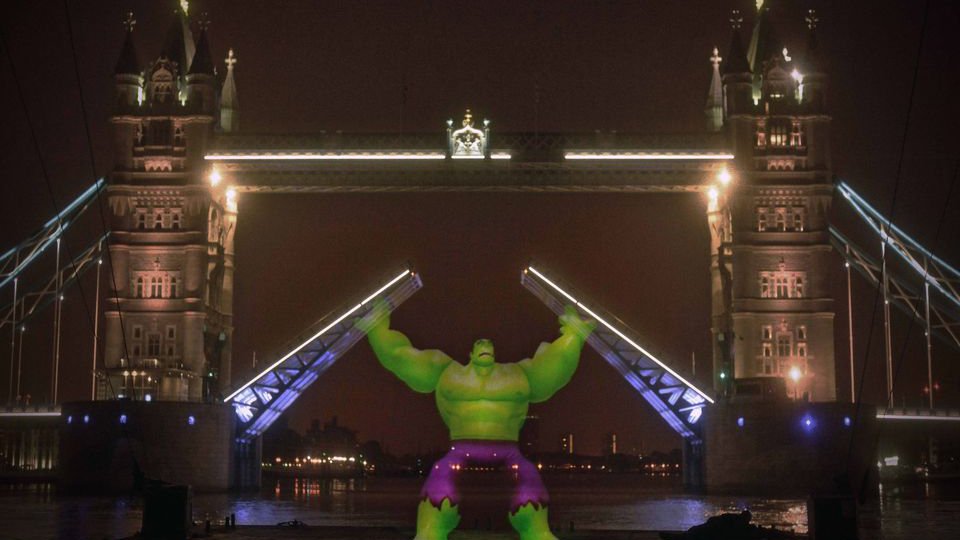 Iron Man, Captain America and Thor were amongst the all-star cast of Super Heroes digitally assembled to give copies of the brand new videogame Disney Infinity 2.0: Marvel Super Heroes an extraordinary escort into the UK earlier this week.

The superhuman delivery saw several of Marvel’s most iconic heroes projected on their journey through London ahead of the game’s launch this Friday, with fan-favourite The Hulk ensuring safe passage of the precious cargo along the River Thames by raising Tower Bridge.

The arrival of some of the world’s most popular Super Heroes in London attracted plenty of attention from onlookers as the UK’s largest visualisation of the hugely powerful Hulk, standing at 36 feet high, floated through the capital, chaperoning the 30 meter long barge carrying the games.

Other Marvel favourites including Black Widow, Spider-Man, Venom and The Guardians of the Galaxy also featured in the stellar digital ensemble from Disney Infinity 2.0: Marvel Super Heroes, guiding the games through the streets of London to their final destination of GAME at Hamley’s on Regent Street.

Since launching in August 2013, Disney Infinity has sold over three million copies worldwide. Thousands of members of the Disney Infinity community have brought their imaginations to life in the popular Toy Box mode – which allows players to create their own worlds and adventures and bring together characters from across the Disney universe – with 12 million downloads of their creations shared to date.

[quote by=”Boel Ferguson, General Manager, Disney Interactive EMEA & UK”]This hotly anticipated next chapter in the Disney Infinity series truly takes this gaming experience to the next level. With its incredible line-up of characters, it introduces brand new exciting adventures and ways for fans to engage with their favourite Marvel Super Heroes. What better way to celebrate its launch in the UK than to have The Hulk and fellow stars of the videogame escort the delivery themselves.[/quote]

Disney Infinity 2.0: Marvel Super Heroes is released nationwide on Friday, 19th September and is available for Xbox 360, Xbox One, PlayStation 3, PlayStation 4 and Wii U.

Advertisement. Scroll to continue reading.
In this article:Disney Infinity, Marvel