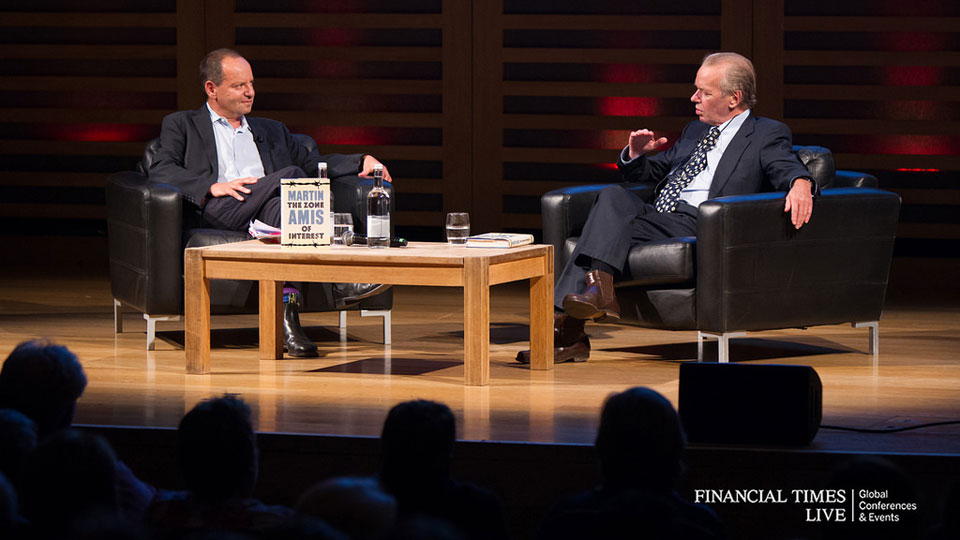 Last night we were invited along to the FT Weekend Interview Series featuring Martin Amis in conversation with Philippe Sands QC at King’s Place, London.

Martin Amis has recently released his fourteenth novel, entitled The Zone of Interest, in which he returns to the subject matter of the Holocaust.

Amis and Sands gave the audience a lively and scintillating discussion about the nature of morality; the writing process; how Europe in the 30s and 40s can be compared and contrasted to the Middle East today; and much more besides. Sands proved a genial and knowledgeable interviewer, who was equally adept at coaxing questions from the audience. As for Amis, it’s a pleasure to sit and listen to someone as equally intelligent, articulate and witty on important subjects.

There was plenty of wry humour on display too. When Sands asked Amis why he decided to write a book about the Holocaust, Amis responded that ‘decided’ is the wrong verb: “To decide to write a novel is the definition of writer’s block,” the novelist claimed. The topic of comedy kept returning, since one of Amis’ characters in The Zone of Interest is ridiculed by the author – but Amis maintains it is not a comic novel. “Laughter is a complicated instrument,” he stated, going on to define ‘satire’ as ‘militant irony’.

After the discussion, we were convinced that The Zone of Interest will be of enormous interest to anyone with a curiosity in Twentieth Century European history, and particularly the Holocaust. It is the end result of substantial research from Martin Amis, who quoted from Primo Levi and Michael André Bernstein, and others who have written factually about the Holocaust. When asked why he had written a fictional account of such a terrible event in human history, Amis replied that, “Fiction is freedom. There are no ‘no entry’ signs.”

The feature image is copyright to Financial Times Live and depicts Martin Amis in conversation with Philippe Sands QC on Monday 1st September.