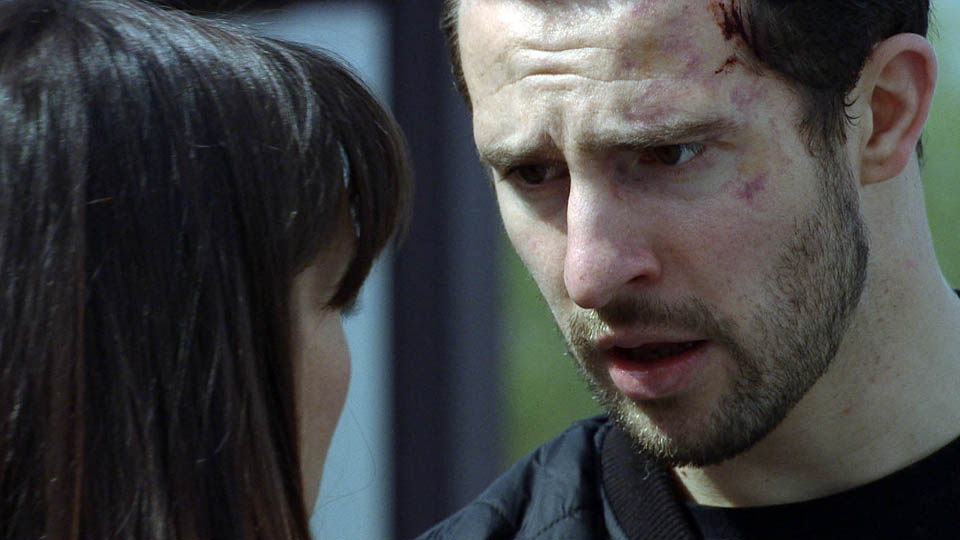 Tuned in to ITV this week expecting to see Marlon’s sarcastic face or hear Chas’ cackle only to be confronted by men kicking a ball about?  Don’t fret, we’ve got a round up of the latest Emmerdale happenings that you might’ve missed plus a sneaky look at what the week ahead has in store.

Ross is panicked after his jewellery shop robbery goes awry and he’s forced to beat the elderly owner with a baseball bat.  He texts Donna to talk about what’s happened interrupting her and daughter April’s christening party.  Donna makes her excuses about being needed at work and runs to Ross to find out what happened. She ends up going to the hospital to assess the damage herself and find out what the police know.  When she gets there she is racked with guilt when she sees the man led in a coma, unsure if he’ll recover.  She decides the only thing she can do is pick up April and skip town under the ruse that she’s just going away overnight.

Ross is unhappy that he’s being left in the lurch by Donna and asks his brother Finn to do him a favour and go to the hospital and find out what’s happening with the victim.  Older brother Pete overhears and goes with Finn to the hospital, both being spotted by the nurse and victim’s wife.  They are disgusted at what Ross has done and worried that it might come back on them if the police are suspicious enough to look up CCTV footage from the hospital.

When a supplier refuses to unload his lorry at the sweet factory until he’s received payment, Megan gets suspicious of Jai’s current financial status and decides to sneak a look at the books.  It’s as she guessed – Jai has serious cashflow issues caused by him spending money with private detectives trying to find his son Archie.

After a few rows, with Jai telling Megan to mind her own business, she decides instead to make him an offer.   She’s been looking for a new project since things didn’t work out with Declan and has a pot of cash waiting to be invested.  Is it a good idea for boyfriend and girlfriend to go in to business together or will Megan take over?  Jai has yet to confirm if he’ll take her up on the offer and might he be made another offer from an employee?

After weeks of pestering, a dodgy French bloke and a sky dive proposal stunt, Dan is looking to make an honest woman out of Kerry.  This week he surprised her by taking her to the registry office to set a date for their nuptials for a month’s time.  Kerry is ecstatic until she sees Nicola’s snooty face in the pub and then vows to switch the small affair to a lavish wedding just to show her.  Dan is bewildered and no doubt wondering where all the money is going to come from and what he’s let himself in for!

Chas asks James to move in with her permanently at the pub which he accepts with glee and a few boxes of old keepsakes.

Leyla is stunned by a bank statement showing that she’s spent £10,000 of her recent windfall already.  Alicia tells her she needs to invest the money so she can’t get at it so Leyla reveals grand plans for David’s shop but he tells her absolutely no chance.

Bernice and Andy make a go of it but there are already signs of cracks when Andy goes on a lads night out with Adam to watch the World Cup – having seen the match we think he’d have been better in with Bernice!

Robbie’s homeless situation is getting more obvious with his stench getting right up Nicola’s nose and Marlon catching him shaving in the pub toilets.

Victoria and Finn have a nosey at some of James’ old family video tapes (who still has a player?!) and think it’d be fun to show the tape at Finn’s birthday party having not watched it to the end.  The Barton clan and the village, are rocked as Adam’s true father is revealed.

Leyla makes Jai an offer to invest in the factory but will he accept this or go with Megan?  Leyla challenges Megan to put her money where her mouth is and see who can earn the most money in 2 hours.

Ross opens up to Donna that he may have feelings for her leaving her torn as to whether to run a mile or run into his arms.