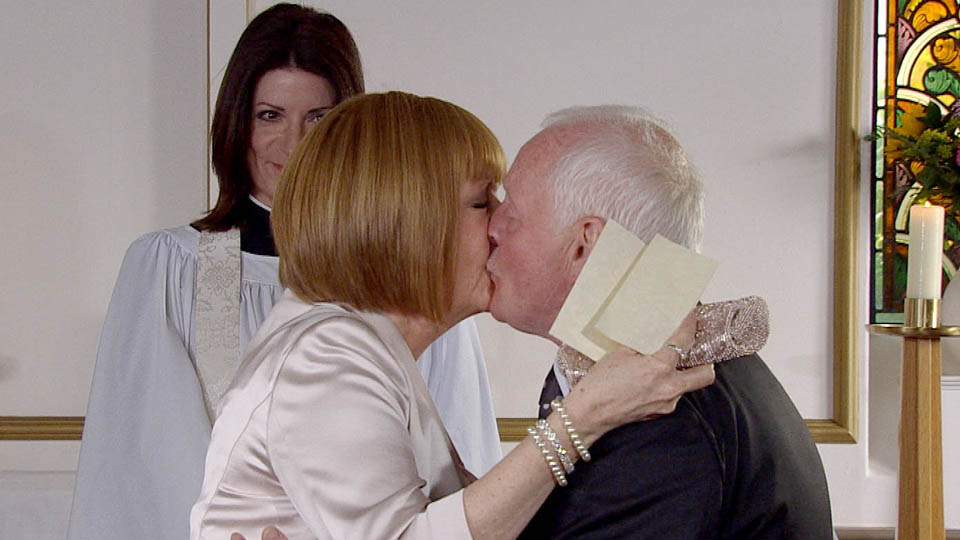 On the week their divorce papers come through, Eric is determined to show Valerie just how much he cares and sets up the Valerie Pollard Foundation for HIV and a fundraising event.  This is all without telling Val who is suspicious that he’s online dating.

When she learns of the truth that Eric will actually being doing a sky dive she flips and doesn’t want him to do it for fear his heart can’t take it.  She’s too late and Eric does indeed jump out of the plane as well as Dan who has a ‘Marry Me Kerry’ banner attached to his leg – much to Kerry’s delight!

However, upon landing Eric’s heart starts to palpitate and as he’s put in the ambulance he proposes to Val.  A worried Val is so taken with his show of support that she decides to set up her own surprise and arranges a secret wedding later that week.  She even tells him she’d rather just have cuddles than nothing and they can take their time getting more intimate.

Not sure if it was Rodney talking some sense in to him or the high of being alive and renewing his vows to Val, but Eric seems to have lost all his inhibitions when it comes to sleeping with Val again.

Belle has to decide to face court or flee

It’s the week of Belle’s trial and the Dingles are worried about their little girl being locked up.  Zak tries to persuade Lisa that they should go on the run but Lisa is worried about his state of mind and support network he’d be leaving behind.  Sam over hears the whole discussion and decides he should be the one to solve the problem.

He picks up Belle and heads to the train station with the eventual destination of Dublin planned.  In his haste though Sam has left a string of clues as to what he is up to and a furious Dom storms round to Zak and Lisa to find out what’s going on.  All of them end up rushing to the train station as well as the police (who Dom called) but they needn’t have worried as Belle didn’t want to go.  The police take both Belle and Sam to the station.

Belle faces her first day in court with Sean in the witness box and the prosecution painting quite the bad picture of Belle.

Moira locks Chas in the pub cellar (perhaps not her best move since what happened with Cameron down there!) and manages to persuade her not to tell Cain about her one night stand with James years ago and the resulting child from it.

But this is soapland, it’s only a matter of time before the cat comes screeching out the bag we reckon.

Elsewhere…
Harriet is summoned to the church council after overspending on her budget.  Faithful Ashley offers his support and Bernice isn’t the only one to spot that puppy dog look in his eyes.

Speaking of Bernice she’s got her own matters of the heart to deal with.   Victoria caught her flirting with Andy in the pub and oblivious to what’s been going on, points out that they are practically family and she’s old enough to be his mum.  This makes her call things off with Andy but neither seem happy with the decision.

Donna gets cold feet and tells Ross she doesn’t want anything more to do with thieving or him.

Megan and Leyla wind each other up at the factory when Megan is covering for Jai and enjoying throwing her weight around a little too much.

The Week Ahead
As baby Amba comes home to the village, Priya is keen to pay at happy families with David which drives a wedge between him and Alicia.  Priya decides it’s time to look for other options and asks Rishi to set up an arranged marriage.

Dom has a change of heart re Belle and tries to defend her in court but will his actions help or hinder her cause?

Bernice’s Salon ‘Beauty & Bernice’ opens with a bang as her relationship with Andy goes public in an unexpected way.