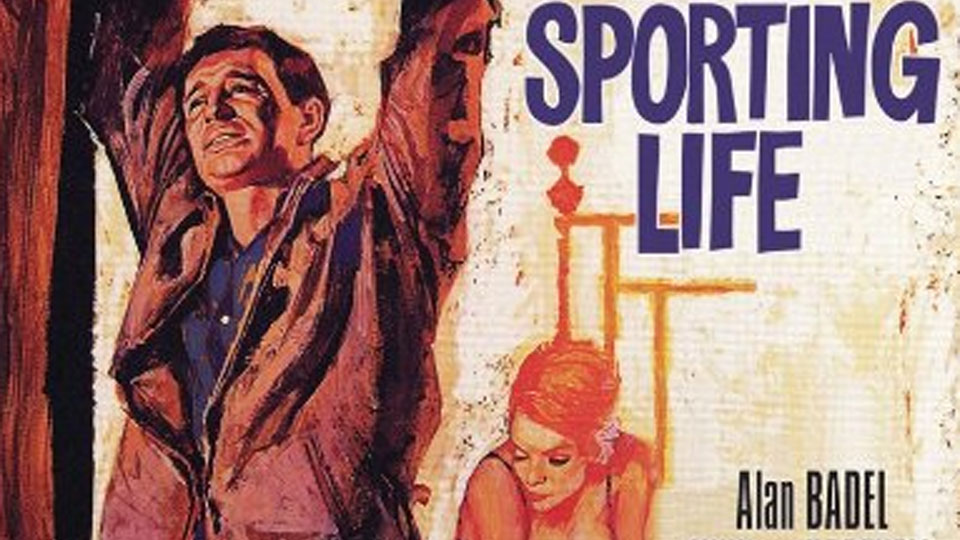 The 1963 British movie This Sporting Life enjoys a first release on high-definition Blu-ray. It came early on in the career of its star, Richard Harris, and helped to launch the hell-raising Irishman on his meteoric rise to fame and acclaim.

The film, adapted from the novel by David Storey, tells the tale of Frank Machin, a miner in Yorkshire whose talent for sport sees him give up the day job and become a local hero at the rugby league club. His new-found fame and wealth (it’s all relative – he signs for the club for a thousand pounds) doesn’t make him happy because of the dark, damaging relationship he embarks upon with his austere landlady Margaret Hammond (Rachel Roberts). The vulnerable widow is cold and cruel to Machin; describing him as “a great ape on a football field”, but he lacks the education and finesse to express his love for her in ways that don’t involve buying elaborate gifts that make her uncomfortable. The story revolves around their stifling and often tumultuous relationship.

If you’re not a fan of rugby, don’t let it put you off (this reviewer isn’t a fan), since it only forms the backdrop to the film. However, the opening sequences, recorded on the pitch, remain some of the starkest depictions of the sport ever committed to film, and now in high-definition, it literally throws you into the centre of the scrum; and the brutal punch Machin receives to the face is liable to draw at least a wince.

The film rates so highly because it succeeds in all the important areas. The relationship between Machin and Mrs Hammond is studied in microscopic detail, with every step forward Machin achieves forcing Margaret to redouble her efforts to rebuild her defences. It’s a fascinating and complex study of a human relationship. Machin is a brute of a man hiding his sensitivity, whilst Margaret is physically weak but prepared to be callous for the sake of self-preservation. We never wholly sympathise with or dislike either of them.

The story-telling is clever: non-linear yet satisfying. After Machin takes a punch to the face he visits the dentist where he’s gassed unconscious, and we learn about his rise to rugby fame and the nuances of his relationship with Margaret through flashback vignettes. The story is masterfully unfolded by first-time feature-director Lindsay Anderson. An erratic talent, he conjured two cinematic masterpieces (This Sporting Life and If….) as well as a few unremittingly awful duds (most infamously Britannia Hospital).

This Sporting Life boasts a cast to die for. The supporting talent includes two of the finest comedy character actors the UK ever produced, who even share screen time together. Leonard Rossiter (Rising Damp) plays a hack sports reporter in an early film outing for him; whilst Arthur Lowe, already a veteran even five years before his immortal portrayal of Captain Mainwaring in Dad’s Army hit screens for the first time, is on the board of executives at the rugby club. Lowe’s genius for comedy is in evidence even here, in a substantially depressing film: the scene in which he asks Machin to guess whether or not he has false teeth is a hilarious moment of sheer brilliance.

This Sporting Life is also notable for the role of ‘Dad’ Johnson, an elderly rugby scout who helps win Machin a trial for the local team. It’s played by William Hartnell, and he was cast as the very first Doctor in Doctor Who after the producer saw his performance. Hartnell’s character adds another layer of nuance, since he is clearly helping Machin and tolerating abuse because he’s in love with him, leaving Machin using him and treating him as cruelly as he in turn is treated by Margaret. Hartnell’s character possibly mirrors director Lindsay Anderson, who was certainly in love with Harris during the making of the film.

The two leads are perfectly cast and magnificent. Harris hides his intellect well, and in a scene where he sings, disguises his very real vocal talents by doing it badly. Physically fit and a keen rugby player in real life (shortly before the booze rapidly aged him) Harris’ performance is a masterclass in physical acting. He’s emotionally on-song too, with his fits of anger well thought-out and justifiable (Harris is wonderful, but in some later films, notably Cromwell, he’s prone to rant). Rachel Roberts gives the performance of her career. She captures the volatility and changeability of Margaret Hammond with great poignancy.

In a strange coincidence, which only adds to the emotional rawness of the film, Richard Harris’ first wife Elizabeth Rees-Williams and Rachel Roberts were both married to Rex Harrison, and Roberts’ suicide was precipitated by Harrison’s rejection of her in favour of Harris’ former wife (they later divorced).

This Sporting Life is certainly a dour film, coming as it did as part of the wave of ‘kitchen sink’ drama popularised in the UK after John Osborne’s Look Back in Anger. The characters are superbly crafted (by playwright David Storey) and their story is utterly captivating. Add to this a rich visual cinematic flair and first-rate performances and you have yourself a classic. It will be too bleak and uncomfortable for some: but there can be no denying the top quality that saturates this film in every department. It’s unforgettable.

As you may expect for a film over half a century in age, there are few extras. However, the photo galleries are commendably extensive, with revealing images from the making of the film both on and off camera. The picture has been restored very well, and is the best it has been seen, however the archive nature of the footage means that it’s not pristine.