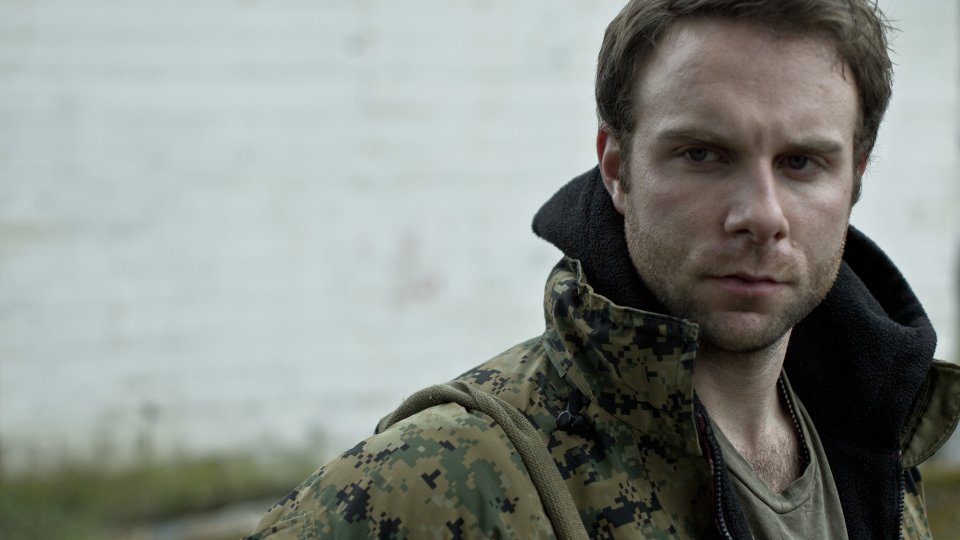 Justin (Bryan Kaplan) returns home from combat and struggles to readjust to civilian life. Battling his demons from his time in the war, Justin tries to find his place in the world during the national economic crash. As he splits his time between studying and working, Justin tries to rediscover himself and find a purpose. With the scars of war hanging over him can he live the life he’s craving?

Fray is written and directed by Geoff Ryan and has been picking up critical acclaim as more and more people discover it. Picking up awards on the festival circuit, the independent feature is a realistic portrayal of a man adjusting to life after being exposed to the horrors of war. The central character Justin spends much of the first half of the film barely uttering a word instead displaying his emotions through his actions and expressions. You feel his frustration when the neighbours are arguing loudly in the night preventing him from getting the little sleep he can muster due to his nightmares.

Justin’s interaction with his teacher Cheri (Marisa Costa) and his boss, and Vietnam war veteran Paul (Wes Harris) provides his only touch-points to reality as tries to adjust. Cheri starts off as a friend but soon romance blossoms between the two with Justin finding it difficult to open himself up to love. From Paul, Justin receives support and helps him try to re-enter civilian life.

The mounting misery of the economic climate is one of the most emotive points of the film as you watch Justin go from job interview to job interview trying to find any work. Every time he’s told that there’s lots of people looking for very few job opportunities. Fray quite rightly criticises the lack of support that war veterans receive once they re-enter society. There are hundreds of people just like Justin who are left to fend for themselves after fighting for their country. The adjustment is not as easy one to make and PTSD prevents people from being able to live a normal life.

Bryan Kaplan is the heart of Fray and it’s his performance that makes the film so engaging. He emotes best when he doesn’t say anything bringing the pain and anguish he feels to the surface through anger and frustration. He carries the film and creates realistic chemistry with Marisa Costa. He really makes you feel that Justin wants to have a normal life but is too haunted by his experiences to be able to fully move on.

Fray is an important and enlightening movie. PTSD and the impact of war on those who fight in it isn’t something that’s given a lot of attention. It’s a common mistake to think that when a soldier returns home all returns to normal. For the men and women defending their country, nothing can erase the horrors they witness. Justin is a representation of all of those who desperately want to get back to normal after experiencing horrors beyond our imagination.