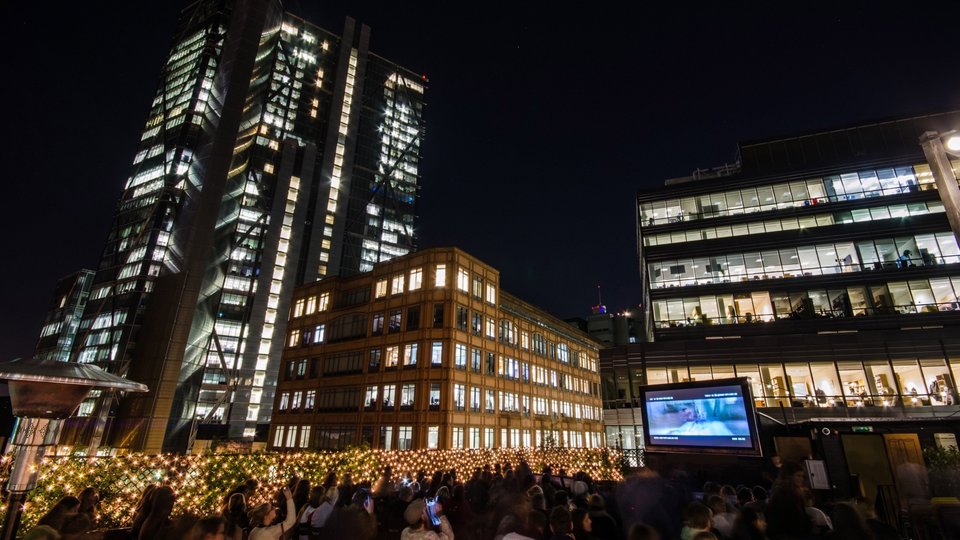 The Rooftop Film Club have returned with a brand new line-up that brings a summer of movies to lucky Londoners. The pop up film event (in association with British Airways) takes place across exclusive rooftop venues – the Bussey Building in Peckham Rye and the Queen of Hoxton in Shoreditch – from May 1 until September 30, 2014.

The weather proved to be great given its unpredictability, with rain only affecting the last 5mins of the film. The crowds slowly amassed at the top of the Queen of Hoxton in Shoreditch, a great hidden gem with a gloriously cosy rooftop packed full of food, drink, great sights and the perfect chill-out area.

As darkness fell, so our experience began with an eager crowd rushing to their seats for ‘Chick-Flick Tuesday’, and a sold-out screening of one of the 90s most endearing and peerless comedies.

Each reveller gets to sit on an exclusive British Airways directors-style chair and there are blankets and ponchos readily available should the elements conspire against you. Armed with a delicious drink from the bar and our special infra-red headsets for that ‘in-flight’ experience, the film began as the London skyline gleamed proudly around us. It’s also worth mentioning just how helpful and nice the staff were – something that too often gets overlooked at big events like these.

As for the film itself, Clueless is that rarest of gems – a teen movie that has gloriously stood the test of time. It’s still as vibrant and hilarious as you remember with breakout performances from everyone. The script is flawless and the soundtrack is amazing – it’s hard to believe that the film will celebrate its 20th anniversary next year! Seeing it in such unique surroundings as The Rooftop Film Club gives fans a great opportunity to see the classics in a new way, whilst the crowd certainly had a few people experiencing the antics of Cher, Dionne and Tai for the first time ever last night.

The Rooftop Film Club has over 170 films to choose from throughout the summer, including new releases such as Anchorman 2: The Legend Continues and The Lego Movie to classics like The Graduate, Top Gun, Reservoir Dogs, Labyrinth and Casablanca.

Rooftop Film Club founder Gerry Cottle, said: “The Rooftop Film Club in partnership with British Airways has something for everyone. Our big screen, high quality wireless headphones and comfy chairs mean you can sit back, relax and experience film like never before.

Putting the British Airways stamp on the event, the airline’s cabin crew will be on hand to welcome guests and chaperone them to seats. Chef Simon Hulstone, who worked with the airline during the London 2012 Games, will be creating film inspired popcorn for the event.

Abigail Comber, British Airways’ head of marketing, said: “In-flight entertainment is such an important part of flying, and this is a fantastic way to celebrate film. We’re excited to partner with the Rooftop Film Club, to bring a summer of movies to hundreds of film lovers.”

The Rooftop Film Club is sure to be one of the highlights of Summer 2014. With plenty of films to choose from and it’s unique setting, it’s one of the best nights out in London.

Screenings will take place in Peckham Tuesday through Saturday, and the Shoreditch events from Sunday through Wednesday. Tickets start from £13 plus booking fee and are now available at: http://www.rooftopfilmclub.com so don’t miss out.