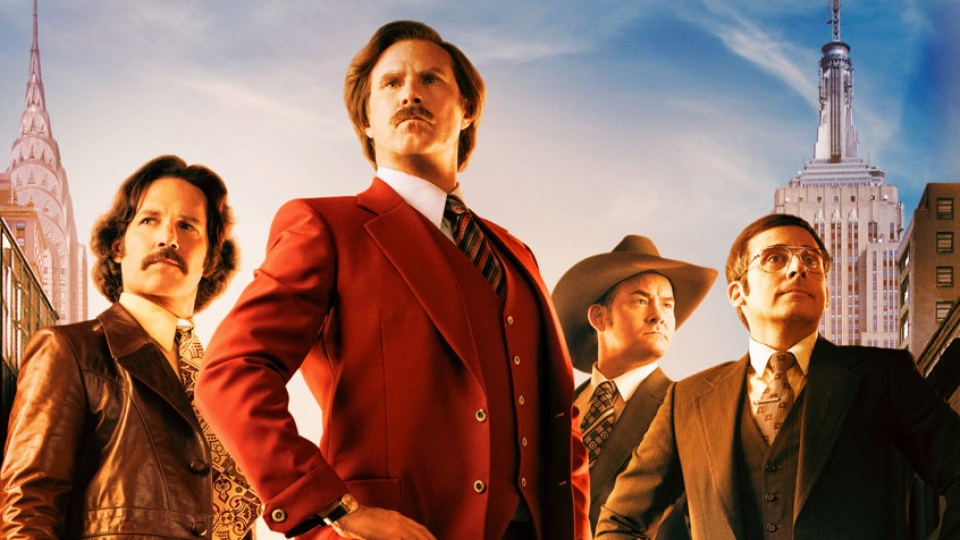 Ron Burgundy (Will Ferrell) and Veronica Corningstone (Christina Applegate) are happily married and co-anchoring the news. Whilst happy with their marriage, Ron and Veronica clash when their boss Mack Harken (Harrison Ford) decides to promote Veronica and fire Ron. Consumed with jealousy Ron drives a wedge into his marriage and is wooed by a new network that is attempting to launch the first ever 24-hour news channel. Determined to outdo Veronica, Ron tracks down his former news team – Brick (Steve Carell), Brian (Paul Rudd) and Champ (David Koechner) – and begins to climb the slippery ladder of success once again. The only problem is that he’s not used to the modern world of the news and he’s got a new rival in Jack Lime (James Marsden).

The sequel to 2004’s cult hit Anchorman: The Legend of Ron Burgundy has been a long time coming and for a while we wondered if it was ever actually going to happen. Directed by Adam McKay, who helmed the original, and written by him with Will Ferrell there’s lots to enjoy about this madcap, zany and hilarious sequel. It’s safe to say that if you weren’t a fan of the first film you should likely stay clear of this one. Ron and his team crank up the crazy and serve up some laugh-out-loud one-liners and bizarre comedy moments.

What we loved about Anchorman 2 is that it pays homage to the first film and revisits some of the jokes that made that film such a quotable classic. That isn’t to say this sequel is recycling material, more giving an affectionate nod to the fans of the original. There’s a real joy seeing Will Ferrell reprising the role of Ron Burgundy and he’s crazier than ever for this outing. The plot takes more than a few turns that defy logic or plausibility but that’s part of the fun. When Ron reunites with Brick, Brian and Champ that’s when the film really takes off and there’s one particular scene involving the four of them, Baxter (the dog) and a van incident that really made us laugh until we cried.

Anchorman 2 enlists a lot of new characters including James Marsden’s smarmy news king Jack Lime, feisty news network executive Linda Jackson (Meagan Good) and Kristen Wiig as Chani, a love interest for Brick. There are lots of other high profile cameos and old faces too but we won’t reveal too much as we don’t want to spoil it.

What really makes Anchorman 2 is the central performances of the four main actors – Will Ferrell, Steve Carell, Paul Rudd and David Koechner. There’s a real magic when the four actors come together on screen and they all slip back into the characters with ease. The interplay between the four of them is fantastic with Carell regularly stealing the best lines with his off-the-wall comments and statements. Even though it’s pretty ridiculous, we really enjoyed his chemistry with Kristen Wiig’s Chani and the two characters serve up some of the biggest laughs. It’s a joy to see Christina Applegate reprise her role as Veronica too but we felt she could have been given a bit more to do. Still it’s fun to see her and Ron sniping at each other again.

Anchorman 2: The Legend Continues is the kind of movie where you have to leave logic at the door and just go with it. If you do that you’ll find the film is just as funny as the original movie and there are plenty of laugh-out-loud moments. Some people may find some of the jokes offensive but you have to think about the context of the movie and the time it’s set in. We enjoyed spending some time with Ron Burgundy after all these years and we laughed so hard we actually cried at times. Anchorman 2: The Legend Continues didn’t disappoint and we think it’s the funniest film we’ve seen in a long time.