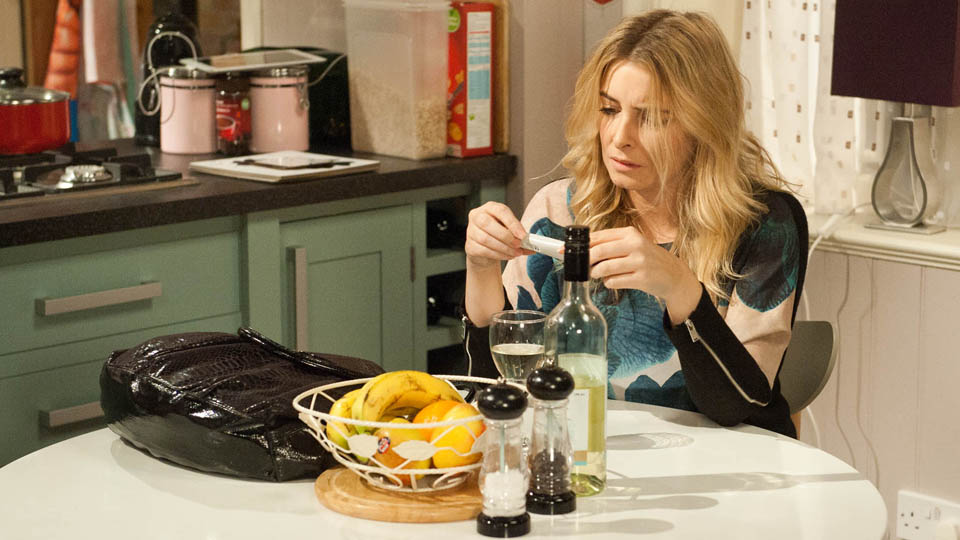 Babygate was the reason that Charity and Jai split up; Jai wanted a baby, Charity didn’t (and let’s not forget she drove Jai’s illegimate baby out of the village fairly recently).  Now it seems that Charity has forgotten her sex education lessons and gone and got herself up the duff with new lover Declan’s baby.  Jai is fuming.

Initially she booked herself in for a termination but when Megan happens upon a pregnancy test and tells Declan, he manages to persuade Charity to keep his child and also proposes marriage to show he’s serious.  Charity accepts but then after a heart-to-heart with Noah she phones the clinic to book a consultancy.  Will she or won’t she keep the baby?

Meanwhile Debbie makes it clear that she thinks her mum is only marrying Declan for the money and even tells Declan this and asks him to test Charity to see if it really is all about the dollar.

Poor old Eric, this week Val has been openly dating Ian and just expecting him to go along with it.  Trying to act cool with it, Eric suggests a get together in the pub with Ian and Val plays along and invites Victoria with David coming to support Eric.  Val gets wasted and shares the family’s worst secrets offending pretty much everyone.

Val was just acting out as she knows that Ian isn’t a good match for her, something he realises too and the pair amicably split – although to hear Val tell it, it was definitely her decision!  It finally seems like she’s ready to make things up with Eric but when she goes to find him she sees that he’s outside the Woolpack trying to flog all her clothes and accessories.  Typical soapland!

Her retaliation is to flirt outrageously with a guest at the B&B and let Eric know that she may have another conquest tonight.  We’re getting a bit bored of all the toing and froing – come on Val sort it out and get back with Eric.

James and Adam reconcile to plot a surprise wedding

After falling out over Adam losing the Farm a client last week, James offered the olive branch this week as the pair team up with Chas to plan a surprise wedding for  Cain and Moira who have decided with Belle’s court appearance coming up that it’s not the right time.  Zak disagrees and is brought on board to help with the secret nuptials.

James also finds out that it’s Adam’s birthday but is shocked when he discovers he’ll be 22.  Could this be anything to do with his fling with Moira years back?

First it was Dom, now Jimmy is the latest benefactor of the secret do-gooder who anonymously leaves him an envelope of cash.  Dom has been trying to track down the generous gifter and mistakenly plants a big kiss on Betty’s lips when he overhears her talking about the money Alan left her.  Betty wasn’t complaining mind!  Harriet is suspicious that it’s Edna who had a big win on a scratch card but claims she threw it away.  She sets a trap and Edna walks straight in to it – aw she just likes to help people and is enjoying having the money to give to the needy.  Maybe she’ll finally crack a smile too!

Finn applies for a new job but for some reason Declan gives him a bad reference, maybe he doesn’t want to let Finn go or maybe he just did it because he can?  Either way Finn has decided to get his revenge.

Moira tries to throw James off the scent.

Finn is caught attempting to return Declan’s stolen credit card by Robbie and then takes things a step further.

Cain gets forceful with Belle ahead of her court appearance.

Rhona is intrigued to see Donna at the hospital.

Val is on the pull with a new man.