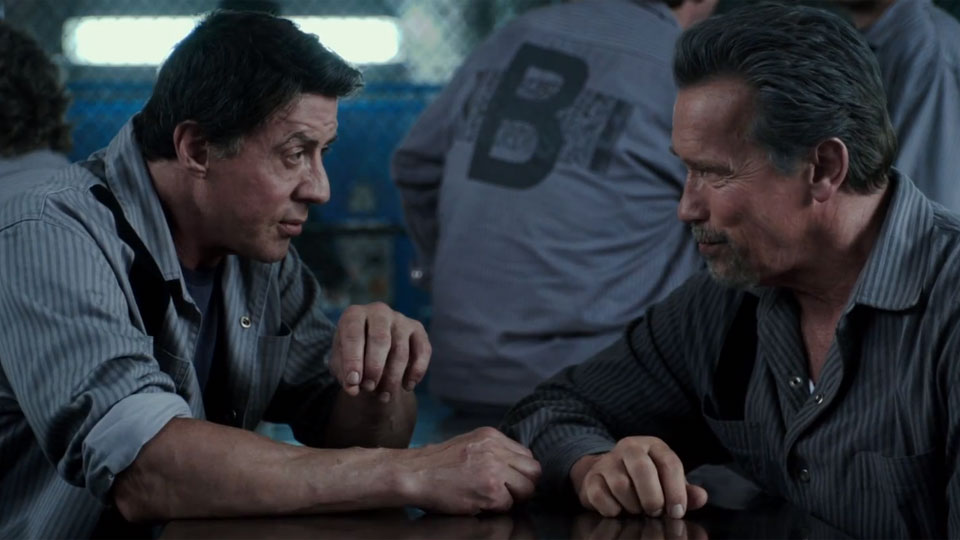 Paid to enter high security prisons and escape while highlighting the weaknesses in their apparent fool-proof systems, structural security specialist Ray Breslin (Sylvester Stallone) is the best of the best. But when he is framed and incarcerated in a prison of his own design he has to put his incomparable skills to the ultimate test. Inside he meets a fellow prisoner and old timer Swan Rottmayer (Arnold Schwarzenegger) who agrees to help him, but only if Ray takes him as well. Getting past the ruthless guards and their relentlessly sadistic warden Hobbes (Jim Caviezel) is no easy job though.

Chances are if you are of a certain age, you grew up watching the two leading actors in Escape Plan rip apart films with their muscles, machine guns and outlandish one-liners. They always tried to outdo each other during their peak years, but sadly for the fans, we necer got to see these muscle men in the same film together. Until now, and whilst some may say it’s too late, we couldn’t be happier to see them share screen (and killing) time. Time may have weathered their looks and brawn, but that doesn’t stop them having so much fun together. And that’s exactly what Escape Plan is – pure, unadulterated fun from start to finish.

The plot is very simple and never gets too convoluted; instead the film focuses on Sly and Arnie doing what we’ve always wanted to see them do. They punch, kick, man-handle, take-down and take apart any that get in their way, OK it’s not the smoothest of action we have seen in recent years but all is forgiven because of it being such an enjoyable action film and one that we don’t get to see that often any more.

Stallone leads the line in Escape Plan very well, he has always been a good action actor and nothing seems to have deserted him in those stakes here. He goes full on powerhouse – something we can’t help but love to see – it’s the Sly of the 80’s returning. Arnold on the other hand is very reserved for most of the film, where he shows his reigned-in, calculating side. His role requires him taking on the brunt of punishment on offer without retaliation to help his friend figure what is required to escape. But don’t think the Austrian Oak is held back throughout the 115 minutes, once he lets loose all bets are off. And there is a scene which will delight any old school fan of Arnold’s. We won’t spoil it but you will know when it happens.

Jim Caviezel gives a great turn as the prison warden with a per-chant for abusive power towards the inmates. It’s a nasty, evil role that he gets to grips with instantly and looks to be enjoying overacting as the bad guy.

Director Mikael Hafstrom doesn’t have a background in action films, but based on this release we hope he will continue his work in that genre. It’s a hugely enjoyable, popcorn action flick with two of the biggest action hero’s of all time. Time may have moved on for both, but Escape Plan shows they can still cut the mustard when needed to.