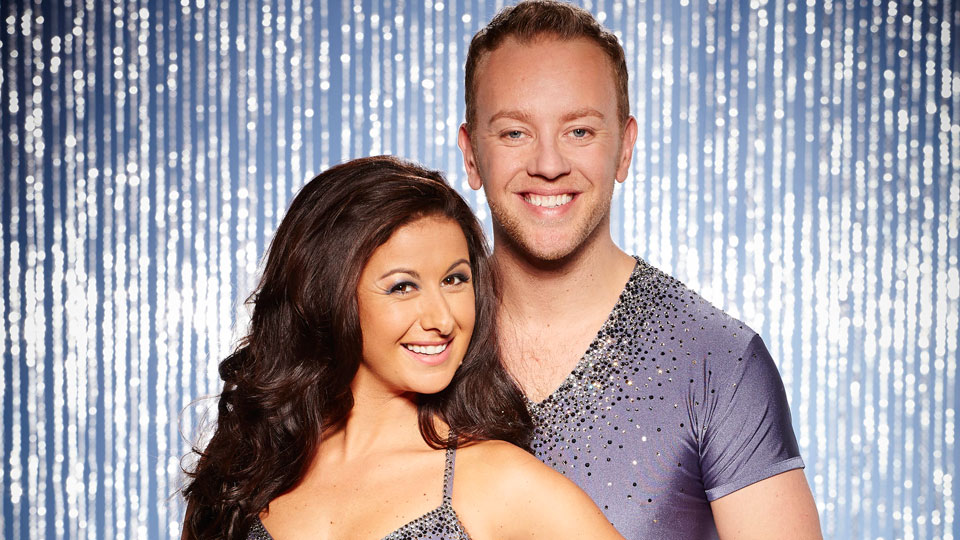 Dancing on Ice returned last weekend for its final series with an all-star line-up of previous contestants.

Professional skater Daniel Whiston is skating once again with Coronation Street star Hayley Tamaddon who he previously won the show with in 2010. During the show’s shocking new series launch which saw favourite Jorgie Porter leave the competition, Daniel and Hayley were thankfully through to the next round.

We caught up with Daniel earlier this week to talk about the final series of Dancing on Ice, discuss how it feels to be reunited on the ice with Hayley, and to find out what’s coming up for him in the future.

How are you today Daniel?

I’m very well thank you. I’ve literally just stepped off the ice from training and I’ve got half an hour now to get a bit to eat and speak to a few people. It’s nice to speak to you!

It’s the final series of Dancing on Ice. How do you feel about that?

It’s a bittersweet to be honest. I’m sad that it’s coming to an end because it’s been 9 years of my life and it’s changed my life for the good. At the same time it’s nice that we’re finishing on a high and that we’ve got all these champions back together. I know we’ve only had one week so far but everyone’s talking about that weekend. I think that we’ve got a lot give this year, it’s going to be a fantastic show and I think we’re going to go out with a bang.

It was pretty shocking to see Jorgie Porter and Sylvain Longchambon leave the competition first wasn’t it?

Nobody expected it and it’s kind of the rocked the boat a little bit because everyone is looking at each and saying ‘well if Jorgie’s gone then anyone could go’. That’s the reality of the show. This year there’s cut and dry winner, or cut and dry first, second and third. I know they normally twist and turn the format as well so as weeks go on nobody’s going to be safe. You’re not going to be able to call the result because anything can happen. No one is safe and I think it’s just a case of enjoying every week and doing your best.

You’re back with Hayley Tamaddon for the final series and you previously won the show together in 2010. How does it feel to be skating together again?

We’re not thinking about anything other than the week that we’re in.  We were dead grateful to be through at the weekend because as I said the competition this year is really high and you just don’t know how it’s going to turn. The amount of support we’ve been getting on Twitter is just unbelievable and it’s been so nice. We feel like people are enjoying what we’re doing and we’re trying to keep that week-by-week and not go running ahead of ourselves or worrying about weeks to come because we might not be here. The reality is that the week’s we’re in we’re going to give it our all and try to entertain everyone as much as we can.

How’s Hayley finding being back on the ice? Has she done any skating or dancing since she won the show?

No. Since she finished on Dancing on Ice she’s not been skating. Obviously it’s taken a little bit of time to get her confidence back and get her confidence about her body back but she’s back on it. She’s loving every single minute of it. You don’t often get the chance to skate with someone you’ve known since you were little but to get two chances we’re like ‘let’s grab it with both hands and just run with it, do our best and try to enjoy every second’.

What did you make of the criticism you received from the judges last weekend? Jason Gardiner was a bit vague when he told Hayley to stop trying to be so perfect…

You know he’s probably got a point. The judges are there for a reason and they’re there to pass comment and make that critique. We just have to take it on the chin. We watched last weekend back funnily enough last night and it does look quite precise and placed. What he wants is for her to go a little bit faster maybe, just push out a bit more and be a little bit more on the edge. I kind of understand what he’s saying and so does Hayley so we’ve gone away, looked at, taken the judges’ comments on board and given a shot at working on it. Hopefully we’ll improve for the next week we’re performing.

The judges obviously can only mark on what they see but we thought you were undermarked and perhaps that’s because you opened the show. Do you think going first may have hampered your scores?

I don’t know. You never know how they’re going to score to be honest. It was quite a lot of pressure on Hayley to go out first. We were opening a brand new show and all the champions are back. Hayley really pulled it out of the bag for me. She was absolutely brilliant. We’re not the sort of people to complain we should have got more marks. I think we were marked fairly and we’ve just got to take it on the chin, work on it and be better for the next one.

You’re not skating this weekend are you?

No. It’s the other half this weekend. All the celebrities that haven’t skated yet are on this weekend. There are loads of twitchy people and everyone’s looking at each thinking who’ll be next. Joe (Pasquale) was a huge shock for me at the weekend because he’s such a favourite. Everyone loves Joe. His public vote is huge so the fact he went is a shock too. You can see all the celebrities thinking ‘oh god who’s it going to be’ and that really is the case because there’s no way of calling it.

You won the series last year with Beth Tweddle who is back again for the final series. What’s it like seeing her dancing with someone else?

It’s kind of weird actually. Obviously me and Beth are close friends so it’s a little bit wife and mistress in the same room. She’s skating with someone brilliant called Lukasz (Rozycki) and they’re looking great together. I’m just really pleased that she’s happy and she’s looking great, which she is. I’ll be cheering her on.

You’re the only pro skater to win the show more than once and you’ve lifted that trophy on three occasions now. You’re the ultimate Dancing on Ice professional really aren’t you?

Ooo! Thank you very much. You can interview me whenever you want (laughs).  I won the first year with Gaynor (Faye), then in 2010 with Hayley and last year with Beth. I’ve had a fantastic run I really have and it’s been an amazing time for me. The show’s really changed my life in lots of ways like I’ve got to perform at the Royal Variety as a solo act. I choreographed part of the Olympic Ceremonies on inline skates. These opportunities that have come my way have been because of Dancing on Ice. The show’s been amazing but other things that I’ve had off the back of it have been just as good.

Who would you say has been the most difficult partner you’ve danced with over the years?

That’s really difficult because everyone has been so different for me. I’ve not had a situation where I’ve not got on with a partner which must be awful. I’ve developed friendships with everybody so there isn’t someone I’d look at and say I didn’t enjoy because that’s never been the case. I’ve had a lovely time with all of them. There’s no one I’d look back at and think they were difficult to be honest. When I skated with Kerry Katona she was going through a very difficult time in her life and we’ve become very close friends. If anything I felt like I helped Kerry through a hard time which was rewarding in its own way. I wouldn’t say there’s anyone that’s been difficult, I would just say everyone’s had different situations and different things going on in their life at different times. You’re not just a skating partner. You become a friend, a counsellor, personal trainer…you become everything. I wouldn’t have it any other way to be honest. I love what I do.

We guess you don’t see anybody but your skating partner day-in, day-out whilst you’re doing the show…

You mentioned earlier that you’re not thinking about winning at this stage but where would be an acceptable point to reach if you don’t win?

I think for me and Hayley we just didn’t want to go out in week one so anything now is a bonus. People that go out on week one…you’ve done all that work and then you’re out. Rather than say where’s acceptable, we’re really just happy to be past the first hurdle which is week one. The standard is so high and last weekend there was only 7 couples in the competition so it was like a mid-show show in week one. We’re just glad to be through week one because I think that was a tough call and we didn’t want to go in week one obviously.

Have you started to formulate any ideas about what you’ll be doing once Dancing on Ice comes to an end?

Yeah, I’ve had loads of exciting chats with people and there are lots of different things in the pipeline which is really exciting. I’ve spent 9 years teaching celebrities how to do a new skill. Maybe it’s time that I tried something new and a celebrity teaches me one of their skills. I do fancy having a stab at other reality shows so I’d say watch this space.

You’re not tempted to go into the jungle are you?

Dancing on Ice continues tonight on ITV at 6.15pm. Dan and Hayley will be skating again during next Sunday’s show. Watch Dan and Hayley’s performance from last week’s show: