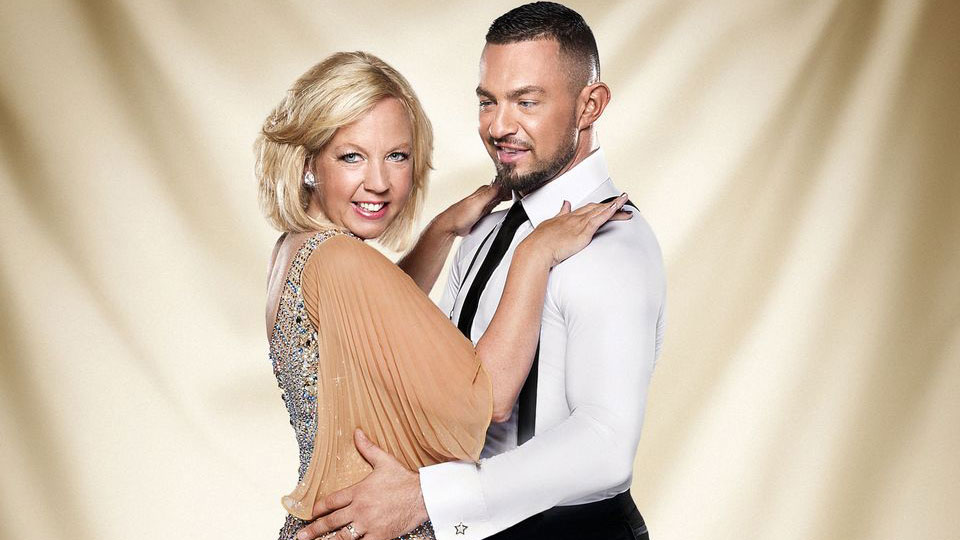 Robin Windsor may have not been in the ballroom the past couple of weeks but he’s been keeping a close eye on the show whilst he recovers from his back injury.

Tonight it’s the Strictly Come Dancing quarter final and the remaining six couples will be battling it out for their place in next week’s semi-final.

We caught up with Robin to find out how his back is, talk about last week’s highlights and discuss dancing with Deborah Meaden again on the Strictly live tour.

How is your back?

I’ve been having a bit of a back problem the past couple of weeks. I have a slipped disc and a nerve problem in my back. Unfortunately I had to miss last week’s show. It’s horrible, even though I’m just in the group numbers, Musicals Week had my name written all over it. With Fame and Anything Goes, those numbers were made for me, I was absolutely gutted I had to sit and watch them from home.

What’s it like being a viewer for a change?

To be honest I absolutely hate being a viewer. My life is Strictly Come Dancing so for me to not be there is absolutely excruciating. I’d rather dance with the back pain but unfortunately I’ve got to listen to doctor’s orders.

As you mentioned it was Musicals Week last week. Who was your favourite dance of the night?

I have to say that last week I think that everyone did exceptional and raised their game tremendously. I thought even though Susanna made a few errors, her routine and her dance was absolutely phenomenal. If she’d have got that all right she would have got four 10s, no questions asked.

Of course Abbey Clancy did get four 10s, the first of the series so far…

What a brilliant Salsa! Didn’t she look like Carrie Bradshaw from season two of Sex and the City? I thought she looked incredible and she loved it. Her personality, I think for the first time, really came out in the dance and of course Aljaz is always hot so…

She seemed so effortless last week with the judges commenting that they couldn’t tell the difference between her and the other female professionals in the routine. That’s amazing feedback for someone who had no prior dance training isn’t it?

Abbey is a rarity. For somebody who’s never danced and got to the standard she’s got to in such a short space of time, it’s really remarkable. Susanna Reid is the other one. Neither of them had really danced before and they are working so hard. They’re both working mums and it’s really crazy for them. I commend them for doing so well.

It was so sad to say goodbye to Mark Benton last week, especially as he was dressed as a lion and looked so cute…

I think Mark has been an amazing character for the show this year. He’s got better and better. The relationship he has with Iveta is just absolutely mind-blowing. They just had such a good time together. Mark has such great comedic dancing and I’m glad he went out on what I consider to be his best dance so far.

It’s the quarter final tonight on Strictly. What do the couples need to do to secure their place in next week’s semi-final?

Just incase anyone reading this doesn’t know what the swing-a-thon is, what does it entail?

It’s going to be really tough because the standard is so close for the first year in a long time isn’t it?

The standard is incredibly close between everybody. I think it’s going to be a massive shocker in the bottom two this weekend and I think it could go any way. It’s down to the public to vote for who they really believe has done the best dance. I think all six are going to do tremendous so it’s going to be a tough call.

Last week proved that anyone can end up in the bottom two when Ashley Taylor-Dawson and Ola Jordan found themselves there. We would never have predicted that…

Seeing Ashley in the bottom two would have woken everyone up and made them realise that no one is safe at this point. Everybody needs to put in their best dances and be on their game from now right until the end of the series.

It’s been announced that you and Deborah will be reuniting for the Strictly live tour next year. How excited are you to be dancing together again?

I’m absolutely over the moon that I’ll be coming back to join the Strictly live tour and even happier that I get to dance again with Deborah. We have some unfinished dancing business to do and it’s going to be a great way to let Deborah continue to do something that she loves so much.

It’s a fantastic line-up this year with Nicky Byrne coming back to dance with Karen Hauer and Lisa Riley hosting. Sounds like it’s going to be a really fun tour?

We saw Jason Gilkison on It Takes Two earlier in the week promising even more spectacular group numbers before the end of the series. How is it possible?

Yeah, they’re getting bigger and bigger. They’re throwing much more into them and getting us to work extremely hard to make them happen. I’m just gutted that I can’t be there at the moment.

Surely the one positive about not being on the show is that you’ve had chance to get your Christmas shopping sorted out?

I haven’t done anything really. I can’t carry anything, I can’t lift anything, I can’t dance and I can’t go to the gym. It doesn’t leave me with my options at the moment. I just have to let myself heal and I’ll be back in the ballroom in no time.

This is why Internet shopping was invented Robin!

I think I’ll be doing my shopping by the Internet or sending out my calendar to all of my friends. It’s the best Christmas gift anyone could have in their stocking (laughs).

Tune into Strictly Come Dancing’s quarter final tonight on BBC One and BBC One HD at 7.10pm. Robin’s calendar is available now on his website www.robinwindsor.com. Watch Susanna and Kevin’s Quickstep from last week’s show: