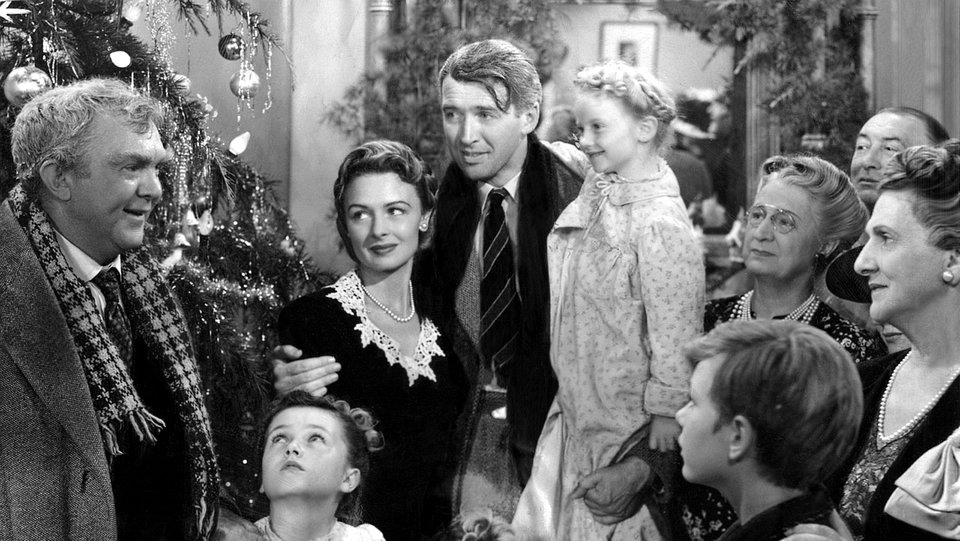 We bring our gift guides to a close with a list of the very best family films to enjoy with your loved ones this Christmas. No other time of the year brings such a sense of magic and wonder to the world. Each of these family-friendly titles capture fun and emotion, often with hilarious consequences and make them the perfect festive treat.

Our countdown is made up of some of the biggest new home entertainment releases of 2013. We also couldn’t resist putting in some absolute classic gems too – films that make the Yuletide so special and unforgettable.

Sit back, relax and enjoy one of these classic stories to really bring home some magic this Christmas.

The quintessential Christmas classic. Frank Capra directs this heart-warming Christmas fantasy. George Bailey (James Stewart) has spent his entire life in the small town of Bedford Falls. Despite his yearning to see the world, George has always sacrificed his personal ambitions for the sake of his family and the local community, settling down to marry his childhood sweetheart, Mary (Donna Reed), and raise a family. However, when a huge amount of money goes missing from the savings and loans company he panics and finds himself preparing to commit suicide.

He is shown the error of this idea by Clarence (Henry Travers), an angel who has been sent to Earth in order to earn his wings. To this end, Clarence shows George just how badly Bedford Falls and its residents would have turned out had he never been born.

Christmas family comedy directed by filmmaker Jon Favreau. Will Ferrell stars as Buddy, a human being who has spent his whole life believing himself to be an elf. Brought up by Santa (Edward Asner) and his elves at the North Pole, Buddy has spent the last 30 years happily working in Santa’s toy workshop. But when his ungainly size starts to become a liability in the elf-sized working environment, Santa suggests that Buddy head to New York City to find his biological father (James Caan).

Needless to say, the unlikely spectacle of a 6’5′ man dressed from head to foot in bright green stands out a mile on the streets of the Big Apple, and the good-natured Buddy finds himself in all sorts of scrapes as he gets used to his new family and surroundings – and they get used to him.

Family comedy starring Macaulay Culkin as ten-year-old Kevin McCallister who is inadvertently left home alone by his family when they go on vacation. On the evening before his family leave for their Christmas break to Paris, Kevin is banished to his room for misbehaving by his mother Kate (Catherine O’Hara). When he wakes the following morning he discovers he is alone in an empty house. Kevin must cope not only with life on his own but also with the threat of two persistent, albeit incompetent, burglars Marv (Daniel Stern) and Harry (Joe Pesci). Meanwhile, Kate vainly tries to find a way to get back home.

Classic creature comedy horror directed by Joe Dante and produced by Steven Spielberg. When Billy Peltzer (Zach Galligan) is given the cute and friendly little Mogwai, Gizmo (voiced by Howie Mandel), for Christmas, he is told never to expose it to bright light, get it wet or ever feed it after midnight. But one night when a glass of water is accidentally spilled over little Gizmo, Billy soon finds out why he was told to follow this advice as Gizmo begins to convulse, producing five new Mogwai.

As Billy and his science teacher, Mr. Hanson (Glynn Turman), then seek to find out more about the creatures, a series of events lead to the escape of a number of them; and due to their heightened intelligence they know exactly how to replicate themselves. Soon after, the town is overrun by a new breed of Mogwai – the ‘Gremlins’ – who are menacing little reptilian creatures, and far from friendly.

Ever since college-bound Mike Wazowski (voice of Billy Crystal) was a little monster, he has dreamed of becoming a Scarer–and he knows better than anyone that the best scarers come from Monsters University (MU). But during his first semester at MU, Mike’s plans are derailed when he crosses paths with hotshot James P. Sullivan, “Sulley” (voice of John Goodman), a natural-born Scarer.

The pair’s out-of-control competitive spirit gets them both kicked out of the University’s elite Scare Program. To make matters worse, they realise they will have to work together, along with an odd bunch of misfit monsters, if they ever hope to make things right.

Disney animated comedy spin-off of ‘Cars’ (2006) following an aircraft who dreams of becoming a racer. Crop dusting plane Dusty (voice of Dane Cook) hopes to become a competitor in high-flying races but is afraid of heights. With the help of US Navy veteran Skipper (Stacy Keach),

Dusty trains for the upcoming around-the-world competition and learns to overcome his fear. However, he will have to face a tough opponent in defending champion Ripslinger (Roger Craig Smith) who will do anything to make sure Dusty doesn’t win. The voice cast also includes Brad Garrett, Teri Hatcher, Cedric the Entertainer, Julia Louis-Dreyfus, Val Kilmer, Anthony Edwards and John Cleese.

Family comedy sequel featuring a blend of CGI animation and live action and based on the iconic characters created by Peyo for the 1980s television series. When the dastardly Gargamel (Hank Azaria) kidnaps Smurfette (voice of Katy Perry) and steals her away to Paris, the rest of the Smurf gang team up with their human friends Patrick (Neil Patrick Harris) and Grace (Jayma Mays) to try and retrieve her from his clutches.

However, with Smurfette the key to Gargamel’s plans to transform his latest minions, the Naughties (voiced by Christina Ricci and J.B. Smoove), into Smurfs, this will be no simple task – not least because Smurfette seems rather taken by the Naughties.

Nativity 2: Danger In The Manger

This Christmas, the unforgettable pupils of St. Bernadette s have set their hearts on competing in the National choir contest A Song For Christmas . But with the headmistress not in favour of the plan, new class teacher Mr Peterson (David Tennant) has his hands full trying to curb the enthusiasm of the kids, not to mention Mr Poppy (Marc Wootton).

Despicable Me 2: Get ready for more minion madness! This hilarious animated adventure sees the return of Gru (Steve Carell) who is retiring from the life of a super villain. However he is unwillingly recruited by the Anti-Villain league to help deal with a powerful new super criminal. Supported by the girls, the hilarious minions … and a host of new and outrageously funny characters.

The Griswold’s are trying to have a nice, old-fashioned quiet Christmas- even though all the in-laws are dropping in, including Clark’s redneck cousin, Eddie and his clan. Looks like it’s going to be a real holly-jolly holiday, if they can survive it.