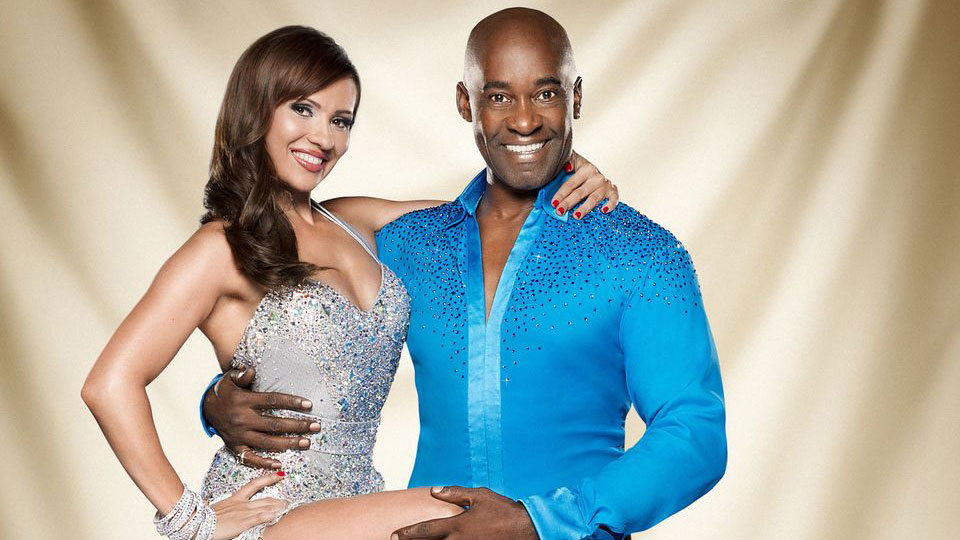 Before tonight’s Strictly Come Dancing even started there was already drama with the announcement that former Coronation Street star Natalie Gumede would not be dancing in tonight’s show after fainting twice during dress rehearsal earlier today.

We wish Natalie a speedy recovery and we’re gutted we won’t get to see her and Artem Chigvintsev dancing this week. Natalie and Artem get a pass into next week as per the Strictly rules but the remaining 9 couples still danced to keep their place in the competition.

One week away from Blackpool and the celebs were desperate to pull out all the stops to make sure they will be dancing at the world famous ballroom next week.

Kicking off the evening was former rugby star Ben Cohen and his partner Kristina Rihanoff. Last week Ben impressed by taking his shirt off for a stunning Paso Doble. Was his technique better? We can’t say we noticed… This week Ben and Kristina were dancing the Jive and during training Ben was struggling but he called on last year’s winner Louis Smith for help. Did it pay off?

Well what a way to start the show! The audience gave Ben and Kristina a standing ovation for their Navy themed routine but what about the judges? Len said it was ‘mostly smooth sailing’ and told Ben he needs to work a bit harder on his feet. Bruno said he had the urge to ‘join the Navy’ but told Ben he needs to hit the beat more precisely. Craig disagreed with the other judges and said it was ‘leaden’ which caused Len to argue with him. Darcey agreed with Bruno and Len saying that Ben proved himself tonight.

Ben and Kristina scored 26 out of 40 from the judges.

Fiona Fullerton was second to dance with her partner Anton Du Beke. Last week the judges weren’t all that pleased with Fiona’s Charleston calling it ‘too polite’. This week Fiona was dancing the Paso Doble and to get into character Anton took her to ride a mechanical bull. We’re not altogether sure that it would be much help but Fiona was confident it would help her get into character. Was she right?

Despite Anton forgetting his steps Bruno seemed to like Fiona’s performance and said her timing was better than her pro partner. Craig said Fiona’s timing was great but said the routine was a bit ‘indifferent, adequate and forgettable’. Darcey said Fiona convinced as a dramatic diva and called it ‘very nice’. Len said he enjoyed the ‘wafting’ but told Fiona she could have given it a bit more ‘wow’.

Fiona and Anton scored 26 out of 40 from the judges.

Model Abbey Clancy found herself in the dance off last week which was a huge surprise considering she was nearly top of the leaderboard. We all saw that Abbey was quite emotional at the end of last week’s results show but she’s picked herself up and is determined to carry on. With her partner Aljaz Skorjanec, Abbey danced the Charleston tonight. Did she do enough to sail through?

Craig said that Abbey had done enough to get through to Blackpool and told her that the attention to detail was amazing. Darcey said she loved this side of Abbey and told Aljaz ‘well done’. Len said the routine didn’t break down and told them he’ll see them in Blackpool. Bruno said he loved the Fosse touches in the routine and called it ‘wonderful’.

Abbey and Aljaz scored 36 out of 40 from the judges.

Actor Mark Benton and his partner Iveta Lukosiute were next to dance. Last week’s disco-infused Paso Doble wasn’t warmly received by the judges but the audience loved it. This week Mark and Iveta had to explore their serious and romantic side for a sensual Rumba. In his VT Mark said he doesn’t want anyone to think he isn’t taking the competition seriously and is determined to get to Blackpool. Did he do enough tonight with his James Bond inspired Rumba?

Darcey said the Rumba should be ‘sensual, earthy’ but told him the routine was too bitty. Len said Mark had gold in his fingers but ‘lead in his bum’ but admitted he loved his characterisation. Bruno said Goldfinger ended up as ‘fish finger’ criticising the lack of flow in the movement. Craig said he hoped Mark manages to get to Blackpool and told him his hands are still a mess.

Mark and Iveta scored 23 out of 40 from the judges.

Next up tonight was BBC Breakfast presenter Susanna Reid and her partner Kevin Clifton. Last week’s Charleston was well-received by the judges and the audience. Tonight Susanna and Kevin were dancing the Waltz which couldn’t be more different from the last few weeks. During the week Chris Hollins, former Strictly champion, paid Susanna a visit to give her a few handy hints. Did Chris’ visit give Susanna a confidence boost?

Len said that Susanna ‘lit up his life’ and the ballroom. Bruno said it had ‘a wonderful sense of timeless elegance’ and told Susanna it was beautiful. Craig said Susanna ‘brought that frock to life’ and admitted he ‘loved it’. Darcey said Susanna’s precision was beautifully done but told her to stretch even further in her legs.

Susanna and Kevin scored 36 out of 40 from the judges.

Hairy Biker Dave Myers was next to dance with his partner Karen Hauer. Despite the judges criticising his Jive last week, Dave is determined to pull it out of the bag this week and get to Blackpool. During rehearsal Dave and Karen got into the Scottish spirit for their Tango. Did Dave prove he can really dance?

Bruno said there was ‘too much haggis’ and told him it was very stompy. Craig said that Karen could write a book about ‘how to survive a grizzly bear attack’ and told Dave he could see there were Tango moves in there. Darcey said the routine contained the most dancing and called it one of Dave’s best dancing. Len said Dave was ‘unforgettable, unpredictable and unmissable’.

Dave and Karen scored 20 out of 40 from the judges.

Despite not dancing tonight Natalie Gumede’s VT was shown so we could see how her Jive was coming along. She admitted that she’d been fading out part way through the routine and during dress rehearsal she fainted. Artem Chigvintsev explained how worried he was about her as she was determined to dance. Artem was in the studio and said he hoped Natalie would be back next week.

Back to the dancefloor Ashley Taylor Dawson was up next with his partner Ola Jordan. Last week’s Halloween Tango scored well but Ashley was told to polish his technique to take things to the next level. Tonight Ashley and Ola danced the Quickstep and during the week Ola went to the Hollyoaks set to check that he was practising his steps. Whilst there she had a quick dance with his co-star Danny Mac. Did Ashley sort out his posture tonight?

A standing ovation from the audience. Darcey said Ashley was ‘amazing’ and told him the routine was ‘consistent all the way through’. Len said Ashley kept his energy up throughout the dance and called it ‘Taylor made’. Bruno said after a bit of ‘spit and polish’ the sparks were flying. Craig said Ashley had to fix the gapping in his technique but admitted he thought it was ‘amazing’.

The penultimate couple to dance was Sophie Ellis Bextor and her partner Brendan Cole. Last week’s Halloween Jive failed to impress the judges so Sophie had to work harder tonight to pull it out of the bag. This week Sophie and Brendan were dancing the Argentine Tango and they were the first couple to dance it this series. Did Sophie climb back to the top of the leaderboard this week?

Another standing ovation from the audience! Len said the Argentine Tango is a more flirtatious dance and told Brendan the choreography was ‘fantastic’. Bruno likened Sophie to a ‘high-class courtesan’ but agreed with Len that Sophie needs to let go more. Craig said there were a few unstable moments but admitted he ‘loved the routine’. Darcey said Sophie held beautiful positions in every lift but agreed with the other judges that she needs to work on her characterisation.

Sophie and Brendan scored 32 out of 40 from the judges.

The last couple to dance tonight was Casualty actor Patrick Robinson with his partner Anya Garnis. Last week the judges loved the couple’s Quickstep and they managed to stay out of the bottom two. In his VT Patrick said he wants to make it to Blackpool and this week he celebrated his 50th birthday. How did Patrick get on with his American Smooth?

Bruno said the routine was ‘pure Hollywood’ mixing Jazz and ballroom. Craig said Patrick did a tremendous save at the end and told him he’s ‘the best male celebrity in the competition’. Darcey said Patrick ‘oozes style’ and told him she wasn’t bothered by the fluff at the end. Len said ‘take him to the Tower’.

Patrick and Anya scored 37 out of 40 from the judges.

Tune in to the Strictly Come Dancing results show tomorrow night to find out which couple will be leaving the competition. Check out photos from today’s dress rehearsal below: