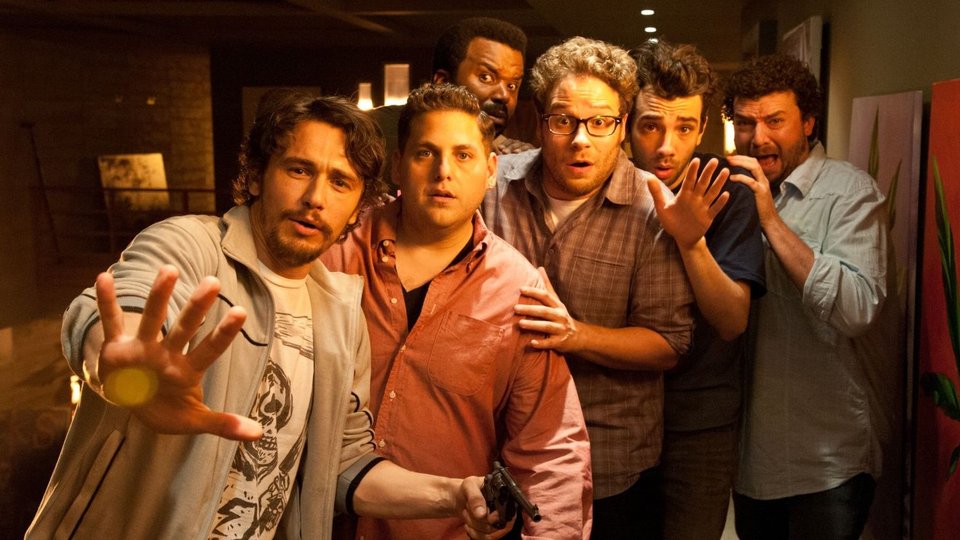 This Is The End DVD review

Jay Baruchel flies to LA to meet up with his old friend Seth Rogen. The two haven’t seen each other for a very long time so they have an evening of video games, snacks and smoking weed ahead of them. Rogen gets invited to James Franco’s house-warming party in the Hollywood Hills, something Jay really doesn’t want to go to. But he reluctantly agrees and the two head off. Full of massive stars like Rihanna, Emma Watson, Jonah Hill and Michael Cera, Jay finds it awkward being there as he doesn’t fit in with them. But his night is made 100% worse when disaster strikes LA and the end of days begins. Now trapped with his fellow actors, Jay has to survive not only A-list divas but the forces of hell too.

This Is The End has a genius concept that ‘what ifs?’ an apocalypse through the eyes of a bunch of well known actors all playing exaggerated versions of themselves. It’s a recipe for success and having such a massive ensemble all sign off on the project should have resulted in an instant comedy classic. This Is The End is very funny in parts but its not as good as it should have been.

Things start to tail off (after a strong opening) when This Is The End morphs into just another stoner comedy when it should have aspired to achieve so much more. It’s happy running with the same gag rather than exploit the magnitude of opportunity creatively conjured up for themselves. Whilst stoner comedy certainly has its merits, ultimately this direction just feels lazy after such a unique set-up.

The performances are mostly all great with James Franco the pick of the bunch (his subtle and slightly creepy Rogen-obsession is hilarious). Seth Rogen finally gets a movie where playing himself is exactly what’s required whilst Jay Baruchel is given a nice run-out as lead actor after impressing alongside Alice Eve in 2010’s She’s Out Of My League.

Jonah Hill channels his inner-Cyrus once again as a two-faced celebrity who has a very rude awakening midway through the film. This results in a clever parody of The Exorcist. The Office’s Craig Robinson does have some good lines but is used a little bit too much in the latter stages of the film – more Franco instead please.

Michael Cera deserves special mention for agreeing to portray himself as such a drugged-up sex addict (which he does remarkably well). It was also nice to get a brief Superbad reunion onscreen with Cera, Hill and Christopher Mintz-Plasse. Jason Segel, Kevin Hart, Channing Tatum and Paul Rudd also surprise in guest roles alongside Rihanna and Emma Watson.

The film introduces Danny McBride midway through and whilst he certainly has some quality lines, it’s just more of the same from him. If you like his routine you’ll like the film. But after playing the same guy in every one of his movies, his ‘exaggerated’ personae is something we as an audience are already all too familiar with so the novelty factor is lost.

The film has some very clever moments like a gonzo-filmed sequel to Pineapple Express and a series of funny video diary entries once the apocalypse begins. But once again, the film is content with just being a stoner comedy when it could have really pushed the envelope to be something more. Having the surviving cast stuck in the one location didn’t help and soon it grows tiresome.

This Is The End will certainly appeal to teenagers and young adults who have grown up with Rogens crew. There are moments of genuine hilarity amongst the chaos that certainly warrant this a viewing. Once the hellfire-smoke settles though, This Is The End just isn’t the instant win it should have been. It’s funny and does have moments of surreal quality but it won’t stay with you for very long afterwards.