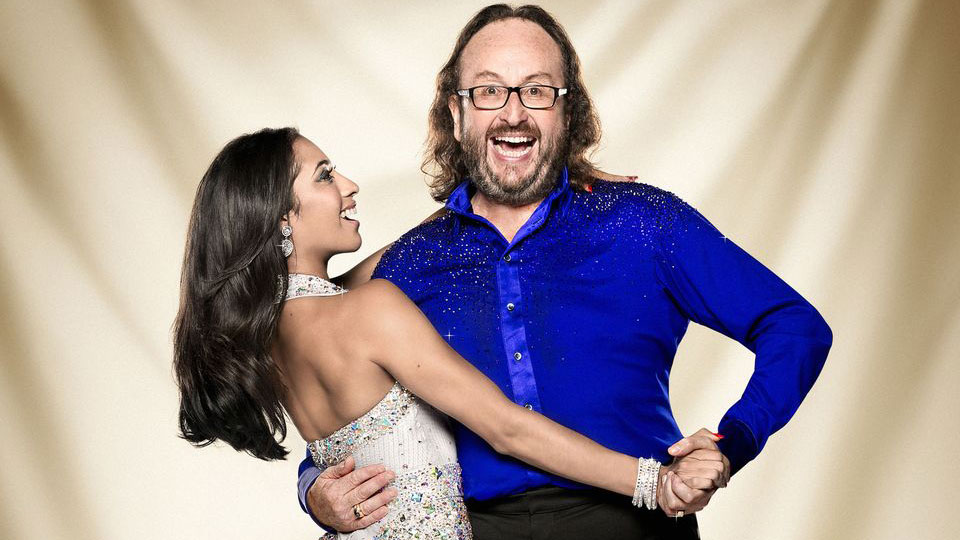 Last night Halloween came to the Strictly Come Dancing ballroom as the dancing competition continued to heat up. As always the Halloween show is one of the highlights of the week and we were lucky enough to be down in the studio to soak up all the action.

The show opened with a rendition of the Time Warp featuring all the Strictly professionals and the celebrities. There were a fair amount of former Strictly contestants in the audience too with Lisa Riley, Louis Smith, Kimberley Walsh and Kara Tointon all in attendance.

The remaining 11 couples took to the floor over the course of the evening to dance once again in the hope of securing their place in the Top 10.

Kicking off the evening was Casualty star Patrick Robinson with his partner Anya Garnis. Last week they found themselves in the bottom two after experiencing a tough week when Patrick suffered a hand injury. This week they were determined to come back fighting with their Quickstep. Did they manage to do enough to impress the judges?

Len said he was ‘bewitched, bothered and bewildered’ by Patrick’s performance. Bruno said Patrick concocted a magic spell and called it a ‘spooky riot’ packed with content. Craig agreed with the other judges and said he loved the energy and theatricality. Darcey said that Anya’s choreography was brilliant and told the couple ‘great work’.

Patrick and Anya scored 34 out of 40 from the judges.

The second couple to dance was former Bond Girl Fiona Fullerton and her partner Anton Du Beke. Last week Fiona finally pulled it out of the bag with her Quickstep and proved that she deserved to stay in the competition. For Halloween week Fiona and Anton danced the Charleston. Was it another good week for Fiona?

Bruno said there was nothing ‘creepy’ about the routine and said it was like ‘Halloween at Doris Day’s place’ before telling Fiona it lacked the feel of the Charleston. Craig said the dance was too ‘polite and well behaved’.  Darcey said she loved how ‘clean and placed’ Fiona was but agreed with the other judges that there were timing issues throughout. Len didn’t agree with the other judges and said he thought it was a ‘proper Charleston’.

Fiona and Anton scored 28 out of 40 from the judges.

Ben Cohen was next to dance with his partner Kristina Rihanoff. In the past couple of weeks Ben has really begun to find his stride and he’s relaxing into the dances. This week he was dancing the Paso Doble with Kristina and decided to leave his shirt at home (which drew a few gasps for the audience!). Did his pecs help his score?

Well the audience gave their first standing ovation of the night but what about the judges? Craig said he was ‘slightly distracted’ and said it was full of ‘power and machismo’. Darcey said the attack and dance content was an improvement but told him to use his waist more. Len said he was hoping for fireworks but instead got an explosion. Bruno said Ben could ‘out bull the minotaur’ but agreed with Darcey that he needed to shape his movement more.

Ben and Kristina scored 32 out of 40 from the judges.

Popstar Sophie Ellis-Bextor has had a good run on Strictly so far and her partnership with Brendan Cole is one of the best on the series. Last week’s Cha Cha was criticised for being a bit too cool and collective but Sophie admitted that she thought her score was pretty generous. This week Sophie and Brendan did a vampire-inspired Jive. Did she manage to let go a little more this week?

Darcey criticised Sophie’s knees throughout the routine saying there were no strong, sharp kicks. Len said Sophie is a competent dancer but told her to come out with more confidence and impact. Bruno said Sophie was a bit ‘heavy and leggy’ and told her she needs more precision.

Sophie and Brendan scored 28 out of 40 from the judges.

Coronation Street star Natalie Gumede and her partner Artem Chigvintsev were the next to dance. The couple have been the leaders pretty much throughout the competition so far with Craig in particular heaping praise on them. Following last week’s high score, Natalie and Artem danced a spooky Viennese Waltz. Did they keep their position at the top of the leaderboard?

Len said it was ‘lovely’ and said it felt like the American Smooth was mixed into the routine. Bruno said that Natalie was ‘magic’. Craig said ‘you made me sick’ to Natalie before saying his trademark ‘fab-u-lous!’ Darcey said she expects a lot from Natalie and told her she never disappoints.

Natalie and Artem scored 38 out of 40 from the judges.

Mark Benton and Iveta Lukosiute were next up with the Paso Doble and promised to put their own spin on the dance. The couple have been one of the most entertaining couples in the competition this year and it’s clear they have a fantastic time together. In the VT we saw Mark flying above the Strictly stage promising a rather spectacular routine. How did he get on?

Bruno called it the ‘disco doble’ and called it more ‘space cadet than matador’ criticising the dance for having the wrong content. Craig complimented Mark’s rhythm and said he ‘didn’t mind it’. Darcey said the attack and conviction is all there but told him to curve his arms. Len said it was ‘long on performance but short on technique’.

Mark and Iveta scored 25 out of 40 from the judges.

Countdown’s Rachel Riley was the next to take to the dancefloor with her partner Pasha Kovalev. Rachel has had a tough time in the competition failing to impress the judges and narrowly escaping the bottom two in recent weeks. This week Rachel was more determined than ever to prove herself and she danced the American Smooth.

Craig said ‘welcome back to the competition’. Darcey said the difference from last week was brilliant and thanked Rachel for the transformation of her top line. Len said it was Rachel’s best dance to date. Bruno said Rachel had found her mojo.

Rachel and Pasha scored 30 out of 40 from the judges.

Hollyoaks star Ashley Taylor Dawon and his partner Ola Jordan have been nearing the top of the leaderboard every week and last week’s Jive was fairly well received. For Halloween week Ashley had to dance the Tango and he admitted he found it hard stay serious during training. Did he manage to capture the mood of the dance?

Darcey said she was attracted to the Evil Ashley but told him to be careful with his neck. Len said that Ashley needs to pay more attention to detail and polish the routine more. Bruno said that the dance had a ‘menacing power’ but told him he needs to take it to the next level. Craig said he really loved it but told Ashley to sort his head out.

Ashley and Ola scored 33 out of 40 from the judges.

Model Abbey Clancy and her partner Aljaz Skorjanec were the next to dance. Abbey has consistently been one of the high scorers in the competition with the judges complimenting her chemistry with Aljaz. For Halloween week Abbey and Aljaz danced an atmospheric Rumba. Did she continue to battle Natalie for the top of the leaderboard?

Len praised Abbey for how far she’d come considering she’d never had any dance training. Bruno said that Abbey was ‘here to stay’. Craig simply said ‘impressive’ and Darcey told Abbey to be careful with the transitions but said it was beautiful.

Abbey and Aljaz scored 34 out of 40 from the judges.

Hairy Biker Dave Myers entertained with his Salsa last week and seems to still have the public on his side. With his partner Karen Hauer, Dave has done better in the competition than anyone expected. For this week’s live show Dave got into the spirit of Beetlejuice for his Jive with partner Karen Hauer. Did he finally win over the judges?

Bruno said there wasn’t any Jive to judge and called it a ‘soft shoe shuffle on mash potatoes’. Craig said it was like the weather ‘overcast, grey, cloudy and a little bit dismal’. Darcey said Dave’s performance was too sweet and she wanted him to dance on the balls of his feet more. Len said Dave ‘excelled himself’ saying he was ‘like a Cumberland sausage chasing the mustard’.

Dave and Karen scored 19 out of 40 from the judges.

The last couple to dance last night was Susanna Reid and her partner Kevin Clifton. Susanna is another front-runner in the competition and is complimented every week for her energy and performance ability. Last week’s American Smooth was well received but this week they had to tackle the cheeky Charleston. Another good week for Susanna?

Craig said he loves how Susanna uses her face whilst dancing and told her he enjoyed it. Darcey said it was cheeky but told her a bit more crispness in the moves would help. Len said there was ‘plenty of treats’. Bruno said Susanna’s energy level was ‘incredible’ and told her she was a pleasure to watch.

Susanna and Kevin scored 34 out of 40 from the judges.

Tune into Strictly Come Dancing tonight at 7.20pm to find out which couple will be leaving the competition. Check out all of the action from the dress rehearsal in our gallery below: