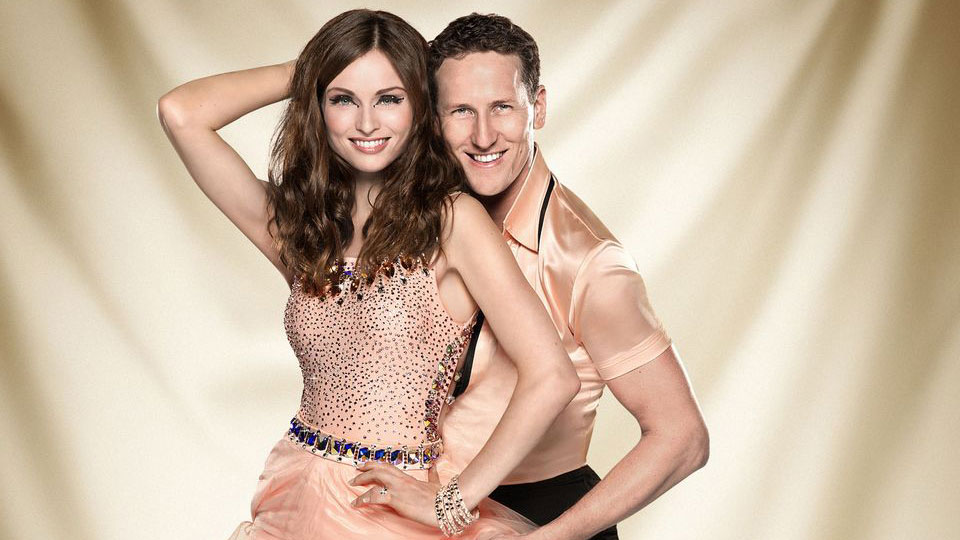 Another week, another Strictly Come Dancing live show! The 12 remaining couples took to the floor tonight to fight for their place in the competition hoping to avoid the bottom two during tomorrow night’s results show.

Last week fashion designer Julien Macdonald and his partner Janette Manrara left the competition after losing the dance-off to Rachel Riley and Pasha Kovalev. After being in the bottom two for three weeks running we think it was about time.

The majority of the weaker dancers are gone now so the competition is incredibly fierce and the leaderboard almost a level playing field. How did the 12 couples get on tonight?

First to take to the dancefloor tonight was former Corrie star Natalie Gumede and her partner Artem Chigvintsev. Despite suffering issues with her back, Natalie topped the leaderboard last week scoring the same as Sophie Ellis-Bextor and Abbey Clancy. Feeling much better, Natalie was ready to take to the floor to do her Samba and in her VT she tried to get into the spirit with Artem. Did they pull off a stunning Samba?

Second to dance tonight was model Abbey Clancy and her partner Aljaz Skorjanec. Last week Abbey had a great week with the judges lavishing praise on her Tango. She’s one of the favourites in the competition and she revealed that she couldn’t control her nerves last week. This week Abbey and Aljaz danced the Foxtrot. Did Abbey manage to control her nerves?

Bruno said it was ‘like a love letter set to music’ and said Abbey and Aljaz are really in tune. Craig said he loved the story that ‘continued through the dance’ but told her to extend her top line a little more at times. Darcey said she wanted to see Abbey stretch her legs a bit more so the routine would be perfectly matched and beautiful. Len said he loves Abbey’s consistency.

Abbey and Aljaz scored 35 out of 40 from the judges.

Hairy Biker Dave Myers aka the people’s favourite, was third to dance tonight with his partner Karen Hauer. Last week the couple scored their highest marks yet and saw Dave sporting a bit of a makeover. Darcey told Dave that he needs to work on his posture so Karen took him to an anti-gravity yoga class to help him. Did the class help Dave’s Salsa?

Craig said that Dave should have considered staying on the fruit trolley throughout the dance. Darcey struggled to stop laughing as she gave her comments but told Dave he was out of sync all the way through the routine. Len said Dave’s left leg and right leg never know what each other are doing and said it was ‘top quality fun and entertainment’. Bruno called it ‘crackers with maracas’ and said he doesn’t think anyone has managed to be so out of time for an entire routine.

Dave and Karen scored 17 out of 40 from the judges.

Dragon’s Den star Deborah Meaden didn’t have a great week last week after the judges scored her and Robin Windsor disappointingly for their Jive. The judges said the Jive simply wasn’t Deborah’s dance. In her VT we saw Deborah adding a bit of business into her preparation in the hope that her Viennese Waltz could blow the judges away. Did it work?

The audience gave them a standing ovation. Darcey said it was an ‘interesting twist’ for a Viennese Waltz and said she liked it but told Deborah to watch her top line. Len said the Viennese Waltz should be a romantic dance and didn’t like the use of the table as a prop. Bruno said it was ‘a bitter divorce’ but said one Deborah was in hold she was better. Craig agreed with Darcey about Deborah’s topline but said he liked the Spanish Paso twist on the routine.

Deborah and Robin scored 27 out of 40 from the judges.

The fifth couple to dance was Casualty star Patrick Robinson and his partner Anya Garnis. Last week’s Cha Cha was a smash hit with the judges and found Craig saying nothing but nice things. Tonight Patrick and Anya danced the Salsa continuing the energetic routines. Earlier in the week Patrick suffered a wrist injury which threw the routine into doubt. Did he dance through the pain?

Len said he thought Anya did a great job changing the routine to accommodate Patrick’s injury and said they did a great job. Bruno said the routine was a little all over the place and said it felt unfinished. Craig agreed that it was ‘stoppy and starty’ but said Patrick has great rhythm. Darcey said she thought Patrick directed Anya really well and said it was ‘impressive’.

Patrick and Anya scored 28 out of 40 from the judges.

Fiona Fullerton and Anton Du Beke have lots of potential but they don’t seem to have made it through one routine without a mishap yet. Last week’s routine was a mess and in training it looked like Fiona was still suffering with her confidence. This week Fiona and Anton are dancing the Quickstep which is a notoriously difficult dance. Did she keep it together finally?

She did it! The audience loved it. What about the judges? Bruno said Fiona ‘played it so well’ and said she covered her mistakes well. Craig said Fiona was ‘back in the room’ this week. Darcey said ‘finally fabulous Fiona’ complimenting her efforts. Len said ‘well done’.

Fiona and Anton scored 30 out of 40 from the judges.

After her experience in the bottom two last week Countdown’s Rachel Riley must have been feeling the pressure tonight. Despite getting her routine nearly right last week, Rachel almost left the competition but was saved by the judges. In her VT Rachel promised to come back fighting and this week she was dancing the Paso Doble with Pasha Kovalev. Did she deliver a show-stopping dance?

Craig said there was too much tension and it was like a lot of trees being felled. Darcey said she could see that Rachel has worked so hard but told her it was difficult for her to ‘hard’ when she’s such a nice person. Len said the dance didn’t suit Rachel’s personality. Bruno said that Rachel had all the content there but needed to let the character take over. He told her to fight for her place on Strictly.

Rachel and Pasha scored 22 out of 40 from the judges.

Actor Mark Benton has become one of our favourite contestants on this series of Strictly. His partnership with Iveta Lukosiute is fantastic and last week’s Cha Cha was pretty epic. In preparation for his Waltz Mark went to finishing school to refine his movements and improve his posture. Did it pay off during the routine?

Darcey said Mark was ‘an elegant gentleman’ and said overall she ‘liked it’. Len said he thinks Mark’s naturalness is ‘terrific’. Bruno said Mark plays it incredibly well every week and told him ‘great performance’. Craig said it was much better this week and told Mark he danced it with ‘feeling and emotion’.

Mark and Iveta scored 28 out of 40 from the judges.

Hollyoaks actor Ashley Taylor Dawson said that nerves got the better of him during his Viennese Waltz last week. During the week Ashley was so busy that his partner Ola Jordan had to cram 30 hours of training into 10 hours. Tonight Ashley promised to give oomph with his Jive. Did he deliver?

Len said Ashley lost his technique here and there but said ‘well done’. Bruno told Ashley that his kicks and flicks needed to be cleaner. Craig told Ashley he loved it despite a knee slide gone wrong that we didn’t see on camera. Darcey said it wasn’t safe or placed and she loved it.

Ashley and Ola scored 31 out of 40 from the judges.

BBC Breakfast’s Susanna Reid was next to dance with her partner Kevin Clifton. Last week Susanna was criticised by the judges for being a little ‘muddy’ with her Samba. In her VT she admitted that she enjoyed doing some a little crazy. During the week Susanna went to Grimsby to meet Kevin’s family and dance with his father who is also a ballroom dancer. Tonight Susanna and Kevin danced the American Smooth.

Bruno said it’s ‘always sunny in Susannaland’ and told her he loves to watch her dance. Craig simply said ‘gorgeous’. Darcey said that Susanna’s focus is ‘bang on’ but told her to have more confidence in Kevin in the lifts. Len called it ‘smooth, suave and sophisticated’.

Ben Cohen found his feet last week and finally loosened up achieving his best score yet. In his VT Ben said he thought he’d turned a corner and his partner Kristina Rihanoff told him he needs to believe in himself more. Tonight Ben and Kristina danced the Quickstep but was it another winning routine?

Craig said he thought that Ben was out of his comfort zone and told him he didn’t think he lead through the dance. Darcey told Ben he needs to up the difficulty in his routines moving forward. Len said he wants to see ‘less messing about’ with the performances and is expecting fuller routines from everyone. Bruno said he wanted to join in and told Ben to stop teasing his ability and really show what he can do.

Ben and Kristina scored 27 out of 40 from the judges.

Sophie Ellis-Bextor and her partner Brendan Cole were the last to dance tonight. Since the start of the competition Sophie has been one of the front-runners and has pulled it out of the bag every week. After her ballroom triumph last week Sophie had to get to grips with the Cha Cha for tonight’s show. In training Brendan took Sophie for a race to get her speed up. Did it pay off in the routine tonight?

Darcey said that Sophie gave the dance attitude but told her to work on her knees. Len said it was competent but didn’t think that Sophie got into the dance. Bruno said Sophie was a bit of a ‘saucy vixen’ and he thought it was ‘very nice’. Craig told Sophie to keep dancing when she’s walking and said it was ‘rather good’.

Sophie and Brendan scored 30 out of 40 from the judges.

Tune into the Strictly Come Dancing results show tomorrow night at 7.20pm to see which couple leaves the competition. Take a look at our gallery below to see some shots from today’s dress rehearsal: