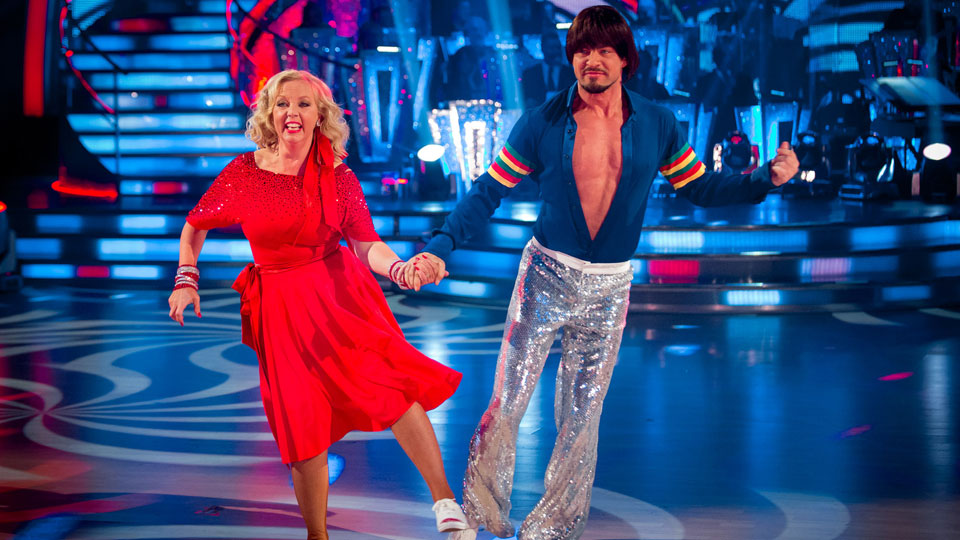 After week 3 it was looking as if Robin Windsor and his celebrity partner Deborah Meaden were on their way to the top of the leaderboard.

Last week their Jive, despite being loved by the audience and the public, didn’t receive great feedback from the judges. Robin and Deborah found themselves next to the bottom of the leaderboard and the fear they may be in the bottom two was very much real.

We caught up with Robin in our weekly chat to find out what went wrong last week, what he thought of the judges’ scores and to discuss this week’s Viennese Waltz.

Last week’s Jive didn’t quite get the reception from the judges that you’d hoped for. How do you feel the performance went?

Our Jive last week was absolutely wonderful and it was everything it had everything it said on the tin; it was Bucks Fizz, it was camp and it was fun. Unfortunately as far as Deborah goes it wasn’t her dance and she was well aware it wasn’t going to be her best dance. She went out there and gave it everything she had.

Would you say that the judges’ scores were fair?

I thought the judges’ scores were fair. They all agreed that it just wasn’t the more suitable dance for Deborah to do and I’m glad that we’ve done it now and we’ve got it out the way. Especially now I never have to see that wig again.

The wig was pretty special wasn’t it?

I thought, ‘if we’re going to do Bucks Fizz, then let’s do it properly’ so I put myself right in the zone, as did Deborah, and I think the public absolutely loved what we did. It wasn’t the best technical dance in the world but I think as far as performance for the show goes it was brilliant.

Last week was probably the first time you had genuine reason to be concerned about your position on the leaderboard. How nervous were you during the results show?

Last week’s results show was absolutely awful because we actually thought we were going to be in the bottom two. We were second to the bottom of the leaderboard. Thanks to the public and thanks to them loving Deborah and what we do, they’ve voted for us and got us through. We’re really, really happy and we’re coming back fighting this week. We’ve got an incredible Viennese Waltz for you guys.

What can we expect from your Viennese Waltz?

We’re dancing to James Brown’s It’s a Man’s World. Clearly in 1966 when he wrote the song it was a man’s world but we now have living proof with Deborah that it’s no longer that way. The whole number is about empowerment and who can take control. You’ll find out who wins on Saturday night.

Previously you’ve said that you consider Deborah to be more of a Latin than a Ballroom girl. How is she getting to grips with doing Ballroom again?

So far I have considered Deborah to be more of a Latin girl, however it’s her ballroom that seems to be going from strength-to-strength. I’m really pleased with how everything’s gone this week. We’ve been working very hard on technique, hip placement, rotation and she’s doing very well. We’ve got quite an unusual Viennese Waltz to do tonight. We have a prop that we use for pretty much half the number. I don’t think it’s ever been done before on the show so I’m really looking forward to it.

Props are notoriously difficult. What has Deborah been doing to get used to dancing with one?

Deborah’s always found it very difficult to dance up-close and personal to me and the prop makes her dance about two feet away from me so for her this is absolutely perfect.

Tonight’s live show is week 5. How is Deborah feeling as the weeks seem to be flying by?

Deborah is loving ballroom dancing more and more and more. I think she got a bit of a knock last week but for Deborah in business if a deal goes badly she needs to shrug it off, pull her socks up and carry on; that’s exactly what she’s going to do this week.

The competition seems to be more of a level playing field now than it ever has been before. Does that make it even tougher in terms of getting through to the next week for you and Deborah?

The standard of the competition is so close this year that it makes it so much worse for us. Normally we can work out who’s going to be in the bottom two and who’s going to go home. This year it’s really difficult so everyone has to up their game every week to make sure they can stay in the competition.

Natalie, Sophie and Abbey are hogging the top of that leaderboard aren’t they? Do you think you may have the chance to topple them this weekend?

We do have our three frontrunners at the moment who are now expected to come out every week and bring brilliance to the Strictly dancefloor. However there are some others that are bubbling over from underneath and I think they need to start and watch their backs.

The professional dances have been nothing short of incredible so far this season. The pros have really upped the ante. Have you got another spectacular routine this weekend?

We’ve got a fantastic group number this weekend. It’s focused a lot on projections. I think it’s going to look very, very clever and I think it’s going to be different to anything you’ve seen on the show before. The professional numbers this year have actually upped their game a huge amount and we’ve got some incredible ones coming up. If you think you’ve seen some good ones so far just wait because there are some amazing ones on the way.

Strictly Come Dancing continues tonight at 6.30pm on BBC One and BBC One HD. Rewatch Robin and Deborah’s Jive from week 4 below: