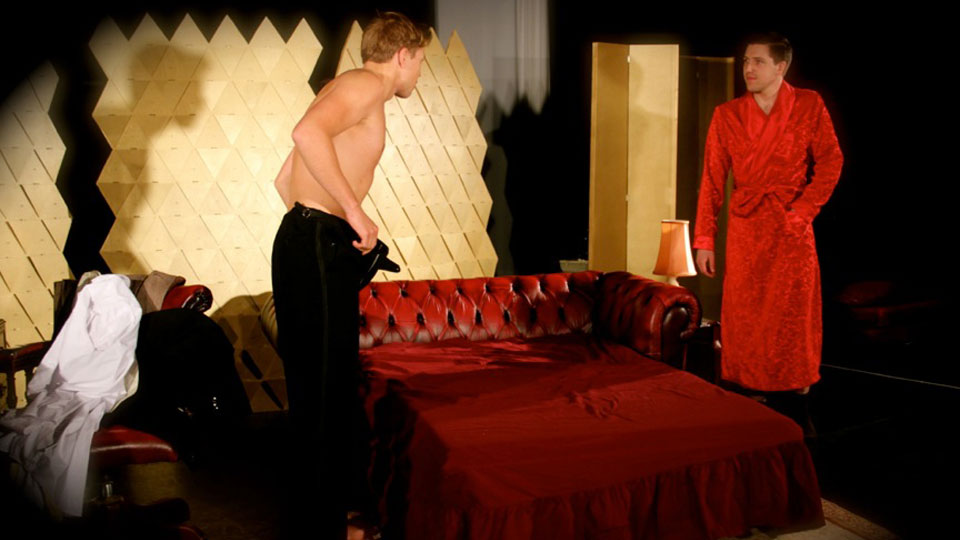 One of the most influential and successful playwrights of the Twentieth Century, Noël Coward, remains a source of inspiration for modern scribes. Earlier this year we saw his life re-imagined in a revival of Making Dickie Happy. This new play, Coward, is a close examination of the writer’s attitude to love and success. It presents Coward at home, keeping his handsome, affable young manservant Cole in his place (a reversal of Harold Pinter’s The Servant) whilst gradually seducing a straight actor, Leonard, who really only wants a part in one of his plays. The more Leonard gives, the more Coward wants, until their unequal relationship causes trouble for both of them.

Coward is a neatly nuanced, well-crafted play with each character learning plenty about themselves by the end of it. Also, crucially, it’s witty too, and laugh-out-loud funny in plenty of places, mostly thanks to some delicious double entendres and digs at Catholicism. A running joke about Boots the Chemist is a constant delight. Set in the 1930s, the play presages WWII, and on a more humorous level, the advent of the angry young men and kitchen sink drama that changed the landscape of British theatre in the 1950s.

Jake Urry as Coward and Josh Taylor as Leonard.

The performances work well. Playing Noël Coward is in some senses an impossible task, because audiences arrive with preconceptions. The actor’s battle is then to play a wit and socialite as a human being and find the depths in someone who presented a shallow face to the world. Jake Urry for the most part succeeds in this task. His comic timing is very good, and he successfully maintains a clipped, nasally tone reminiscent of Coward. He is especially good at flashing his eyes and revealing Coward’s lust, and the unpleasant side of a childish and bullying nature, with only the touches of melodrama losing credibility. A stark contrast in style is adopted by Peter Stone, who wisely underplays everything as Cole, the manservant who barely exists, since he is eclipsed by his employer. Stone resists the temptation to find ways to show off, and as a consequence his put-upon servant emerges as very sweet and sympathetic, with a fine line in the dryly ironic.

Finally, Josh Taylor gives a grounded performance as actor Leonard Marlowe. His character undergoes the most change in the play, starting off nervous, hopeful and in awe of Coward; and ending up… well, you’ll have to see it for yourself. His serious performance is a great foil to Urry’s light wit and Stone’s diffidence; and he further rewards the audience with an appearance in his underwear.

There are a few limitations of the space. The physical action doesn’t flow very elegantly owing to the small stage area. It becomes especially cramped when (spoiler alert, but we’ll leave the ramifications to your imagination) the sofa is folded out into a bed. The redressing of the set is handled to ensure minimum disruption, but the more dramatic overhauls inevitably don’t help with the pacing. A good deal more smoothness could be achieved with the actors’ greater familiarity with the props: especially when it comes to lighting cigarettes with matches.

Coward offers an uncomfortably unsympathetic view of Noël Coward. What emerges is not only someone who bullies others and abuses his position of privilege, but also someone who stood for the old establishment with a class pecking order. Leonard is used as a bridge to modern sensibilities. Whether or not Leonard’s influence rubs off on Coward and challenges his cosy worldview is an intriguing question the play raises, that it perhaps could do more to answer.

A little more vigorous polishing in all the right places would raise Coward to a high standard. Coward is an interesting and thoughtful play, and the talent behind Just Some Theatre Company show great promise. Ones to watch. You can follow them on Twitter @justsometheatre.