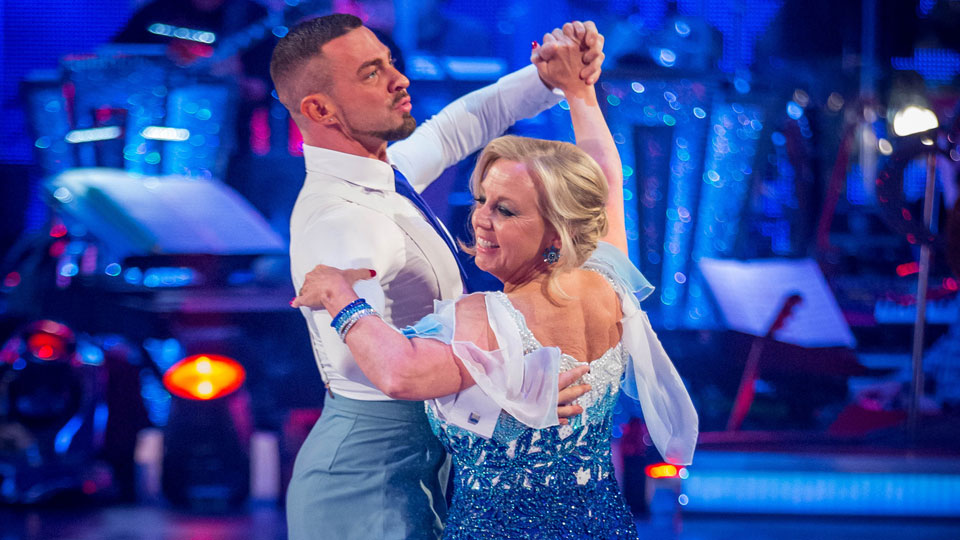 On their way up the leaderboard, the couple are establishing themselves as the dark horses in the competition and are keeping their eye on that glitterball trophy. This week Robin and Deborah will be tackling the notoriously difficult Jive.

In our weekly chat with Robin we discussed last week’s performance, find out how Deborah is coping with a fast and furious Jive, and talk about claims that some contestants have an unfair advantage in the competition.

Last week you and Deborah got your highest score this series with your Quickstep. How do you feel it went?

Well what can you say? Love week down at the Strictly ballroom was mine and Deborah’s best week yet. We achieved our best score and in my opinion they did save the best until last. It was the most uplifting dance of the night. We got our first standing ovation and I think the audience, judges and public at home smiled and enjoyed it.

When we talked last week you said that Deborah may be the dark horse of the competition and we think on Saturday night she proved that. She’s just surprised everybody hasn’t she?

Is it nerve-wracking having to wait until the end of the show to perform?

When there are 14 couples and you have to wait until last it is painful. Not only do you have to watch everyone else go first but you start to lose your concentration. You also start to get a little bit tired as it’s been a very long day but you’ve still got a dance to do. When you get out there the adrenaline takes over, dance mode takes over and away we go on the dancefloor.

What a lot of people don’t realise is that Saturday’s are a really long day for the pros and celebs because you don’t just turn up and dance, you’re around the entire day…

Saturday is the longest day of the week. Most of the girls, especially the professional girls, are there at 7am. We have to practice the group numbers and practice to the band. Everybody then has to go into hair and make-up and have a dress rehearsal. We finish about 9pm so it’s a good 12-13 hour day.

There’s nothing worse I have to say than waiting under those lights during the results show for your name to be called. We got to four people left and Deborah did say to me, ‘well at least we get to do our Quickstep again!’ thinking that we were going to be in the bottom two. Thankfully due to everybody who picked up the phone and voted online, we got through and Deborah’s face was just shocked. I think everyone was talking about that and she was genuinely shocked to actually be through to next week. Here we are in training getting ready for this weekend’s Jive.

Did you genuinely think there was a chance you could go home last week? From an audience perspective there was no way that you were going to be going home.

The atmosphere in the studio is so intense during the results show. You don’t know how the public are voting. Yes the judges have half of the say but it’s down to the public at the end of the day who is in the bottom two. The thing is this year is that the standard is so even across the board that we could be at a point soon where anybody could go home. I think there’s going to be a couple of shock exits this year.

This week is all about the Jive and you’ll be dancing to Bucks Fizz. How’s that coming along in training?

This week we are taking a little step back in time to 1981 with Bucks Fizz and Making Your Mind Up. It’s Eurovision city for Deborah and I this week. You’ll see a slightly different side of Deborah which we’ll bring out then swiftly put it back in its box.

Can we expect skirt-ripping during the routine?

To be honest if you’re going to do Bucks Fizz then you have to do Bucks Fizz properly. There will be the skirt moment. We would be very silly not to do that. It took me quite a lot of convincing to get Deborah to give it a go but she’s now in the spirit of the dance and Eurovision is taking over our lives for a week. I really, really, really can’t wait to perform this with Deborah on Saturday. We’ve got a few other surprises up our sleeve as well but you’ll have to wait until Saturday night for that.

Knowing you, if Deborah hadn’t wanted to do the skirt rip you would have done it yourself wouldn’t you?

Exactly! Too right! If Deborah had said ‘no, no, no I’m not doing the skirt rip’ I definitely would have done it myself. It’s the most iconic moment in Eurovision history and in its day it was the most controversial thing that happened on television. I like to be a little controversial occasionally.

The Jive is all about the energy and is a fast and furious dance. How is Deborah coping with it?

What’s been really great is the fact that we did the Quickstep last week which was ridiculously fast and there were an awful lot of steps. It’s built Deborah’s stamina up and she’s felt the joy of the dance now. You could see on her face how much she was enjoying the Quickstep last week. That’s what has put her in a great stride for this Jive because they are very similar to one another as far as speed and movement is concerned. She’s doing very, very well and we just can’t wait to get going on Saturday night. We’ve been waiting for this one for a long time and I’ve wanted to dance to this song for a long time so I’ll finally get the chance.

There’s been criticism in the press over the past week that some of this year’s contestants have an unfair advantage due to previous dance training. Denise Van Outen was subjected to the same last year. Does prior dance training of any variety really give anyone an advantage?

I think everyone that comes into Strictly comes in with different advantages and they’ve had different experience through their lives with dance. Some people have had none at all and some have had quite a bit. For me, having somebody who’s had no dance training is actually best because you’ve got a clean slate you can work with and they don’t have bad habits from things they’ve picked up in the past. They listen and do everything that you say.

Those that have had dance training in their past have been trained in a specific way. For them to undo everything they’ve ever learned is really difficult. It’s like learning a brand new language. I don’t see it as an unfair advantage; I just think that everybody has different challenges throughout the show.

Let’s take Anita Dobson for example. She was somebody who has done Shakespeare and has grown up to stand very tall and straight. Of course she’d been to stage school over the years but to try and undo all that and get her to bend her back in ballroom was just absolutely crazy. It was never going to happen because her body was trained in such a way.

I don’t think anyone is at an advantage or disadvantage. Everyone is putting in the same hard work and some of the celebrities have to deal with big expectations from both the judges and the public so they have to work even harder. When there is no expectation you can come out and do whatever you want, do a good job and enjoy it more.

Tune into Strictly Come Dancing at 6.30pm on Saturday night to see the remaining 13 couples dance. Watch Robin and Deborah’s Quickstep from week 3 below: