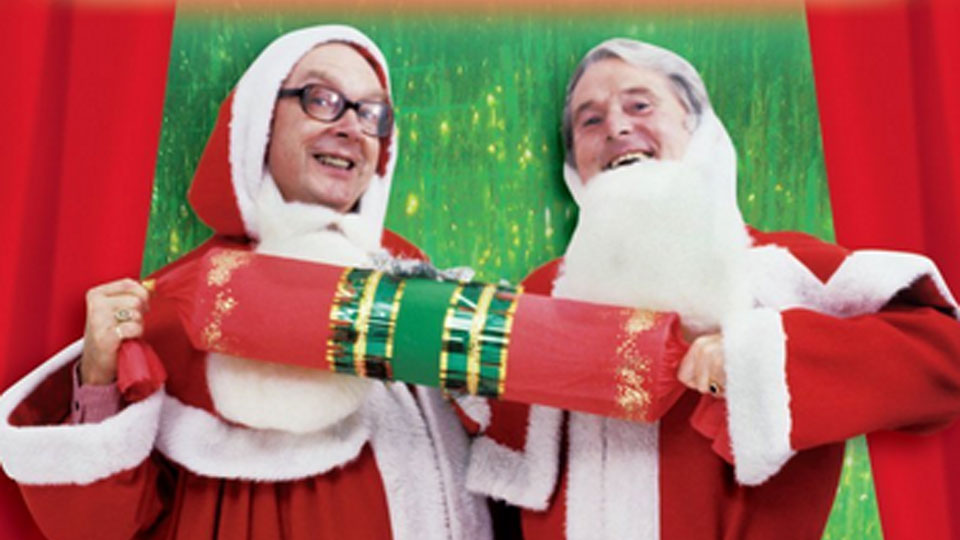 This release, Morecambe and Wise – The Thames Christmas Specials Volume One, comprises three special festive instalments of The Morecambe and Wise Show from 1978 to 1980, when comedy duo Eric Morecambe and Ernie Wise were already established British TV and entertainment institutions. For the previous ten years they had been with the BBC, and their much-loved show transferred to ITV in 1978. The previous Christmas had seen them break viewing figure records. For fifteen years, Morecambe and Wise were as essential a part of British Christmas as tinsel, soggy Brussels’ sprouts, family arguments and embarrassment under the mistletoe.

A bit of context helps to understand some of the in-jokes on offer here. Ten minutes into the first episode, guest star Leonard Rossiter is teasing the “lads” about their move to a commercial channel (having gone the other way himself, with Rising Damp to The Fall and Rise of Reginald Perrin). If the friendly ribbing is lost on viewers coming to the episodes for the first time: fear not – the sight of Eric and Ernie with Leonard Rossiter, all in full 1940s make-up and drag and miming to The Andrews Sisters’ Boogie Woogie Bugle Boy is as funny now as it was thirty-five years ago.

There are a few other high-profile guests in the first episode. Newsreader Anna Ford memorably dances with Eric and Ernie, whilst actor Frank Finlay (A Bouquet of Barbed Wire) is coerced into appearing in a film they’re making. Former Prime Minister Harold Wilson guests, with Eric taking more than his share of his tobacco whilst Ernie constantly calls him ‘Your Majesty’.

The humour is very innocent and daft, and it’s enormous fun to watch. The two old-school comedians, with a prolonged hangover from Music Hall tradition, would weave song and dance routines into their comedy, and address the audience from in front of a curtain – all part of their theatrical origins. Dated, certainly. Still funny? That’s a matter of taste, but they’re legends for a reason.

The 1978 episode turns out to be the funniest, for quite a sad reason. Eric Morecambe’s dodgy ticker saw him suffer a number of heart attacks before the fatal one in 1984, and he had undergone major heart surgery in 1979. This explains David Frost’s maudlin voiceover introduction, and the enforced new format for the show. Eric, unable to perform vigorous routines such as running downstairs (actor Garfield Morgan – famous for this role in The Sweeney at the time – is employed to make his entrance for him), instead has a touching and beautifully-played reunion with Ernie before they sit down to a This Is Your Life-style look back over their long careers together.

The late David Frost’s easy manner and slightly bumbling persona holds the episode together, but it’s more of an interview than a comedy show, and it’s hard to get too enthused about guest-star Des O’Connor, even if he does come in for plenty of stick from Eric Morecambe and there’s a great running gag about him singing one of his songs. The new material (Eric and Ernie as Sylvester the cat and Tweetie Pie) isn’t the best, either. The finest new joke is a visual gag at the expense of the BBC!

Glenda Jackson, the top British actress-turned-Labour politician, appears in both the 1979 and 1980 episodes. Things are very much back on track for the final instalment, reverting to the usual format of special guests, stand up and sketches. It’s notable for an appearance by Alec Guinness, relatively fresh from Tinker, Tailor, Soldier, Spy at the time, who joins in with the signature song ‘Bring Me Sunshine’; and his Star Wars co-star Peter Cushing, who spends the episode trying to find a way of being paid for his previous appearance on the show. Peter Barkworth (remember him?) appears with Hannah Gordon in a play what Ernie wrote.

Comedy always boils down to a matter of taste, and these Yuletide instalments of Morecambe and Wise are certainly old school. That’s not a criticism, it’s just that modern audiences are used to shorter, slicker sketches, which simply weren’t made four decades ago when they could run on for ten minutes or more. Anyone with a taste of the lost tradition of stage comedy, and fans of Eric and Ernie’s will find much to enjoy here. Coming close to the end of their long careers in comedy together, Eric and Ernie have refined their routine and make it all seem so effortless. Although each episode is around an hour’s duration the time whizzes by when you’re watching them. The two legends of British comedy are delightful and remarkably easy company. You can’t get a warmer, tinglier Xmas feeling if you imbibe a litre of mulled wine.