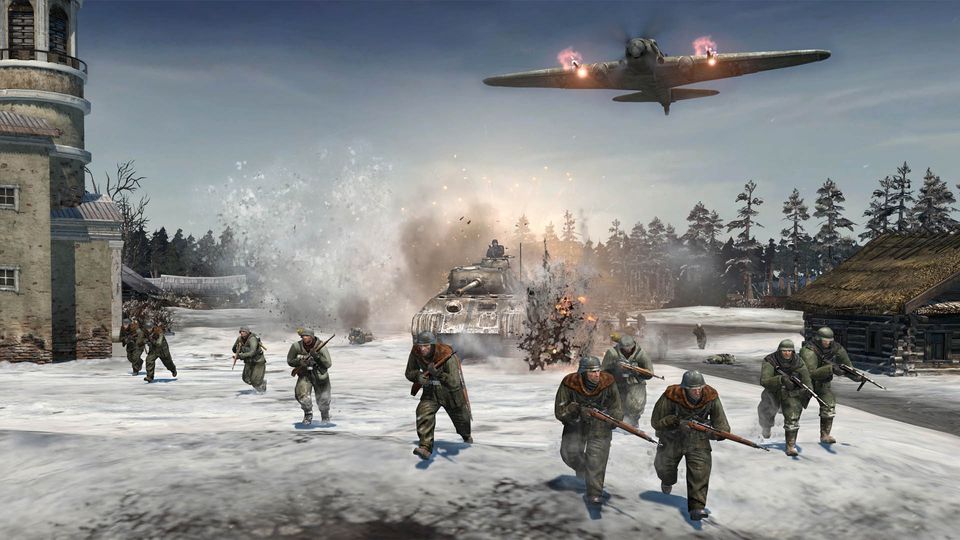 Earlier this year when publisher THQ closed down due to bankruptcy it was unclear what would happen to their game portfolio. Of their many titles one that we were looking forward to the most was Relic Entertainment’s Company of Heroes 2.

The game is the follow up to their 2006 release Company of Heroes which is regarded as one of the best RTS games ever made. Fans have had a long wait but the game is finally here after being picked up at auction by SEGA and thankfully there isn’t a blue hedgehog in sight.

RTS games aren’t usually the best looking games in the world so we were surprised when it auto-detected our mid-range PC and chose the lower settings. We thought this must be some kind of mistake so ramped them up to max and ran the in-game performance test – we were wrong. On top settings the game looks incredible but it brought our PC to its knees. Embarrassed we quickly switched back to the recommended settings and tried to forget about it.

However we were pleased to see that the game still looks brilliant on the lower settings. You can zoom right in on the action to see the brilliant animation at work. The sound is also well worth a mention as it really makes the battlefield come to life.

If you played the original game and its expansions you’ll find much familiar in Company of Heroes 2. The first game focused on the World War II operations throughout the Battle of Normandy between the Americans and Germans.  This time around the focus is on the Eastern Front with the battles of the Soviets and Germans.

Three modes of play are available to you – the single-player campaign, skirmishes and Theater of War. The single-player campaign tells the story of former Soviet Army lieutenant, Lev Abramovich Isakovich. He is locked up in a Siberian gulag in 1952 and the story is pieced together through a series of flashbacks which become missions in the lengthy campaign. These story cutscenes are some of the weakest parts of the game and suffer partly due to using the game engine. They do try to pack in the emotion though by highlighting some of the horrors of war such as the gunning down of your own soldiers for trying to retreat.

Before you begin playing it’s worth checking out the in-game Tactics section with aims to help you learn the game. Here you will find a series of videos based around important topics such as weapons, weather, tactics and abilities. There are also text-based tips and a single tutorial mission that teaches you enough to get started with the game.

Everything else you need to know is taught through play and the first missions help to ease you into the game. Missions are incredibly hectic and great fun but it takes some practice before you can successfully manage to fight in different areas around a map at once. You have to constantly monitor the enemy and adapt on the fly as situations develop. With a variety of troops on offer as well as vehicles and powerful weapons there are always plenty of options at your disposal.

New conscripts constantly join the battle to bolster your ranks but for an easier time it’s worth keeping soldiers alive. This means careful tactics and knowing when to retreat or change position. When attacking a large stationary gun for example it’s worth taking the time to flank it rather than go for a full frontal assault. Keeping your troops alive allows them to accrue XP which can improve their effectiveness in battle.

Many of the battles on the Eastern Front were fought during an incredibly harsh winter and you need to take these conditions into account. Deep snow can slow your troops down which is a major hindrance when faced with enemy snipers. Frozen bodies of water can only support a certain amount of weight before the ice breaks so it’s not a good idea to move all your troops onto ice and then drive a tank across it as well. Also your soldiers can’t stand the cold for long so when there’s a blizzard you need to keep them warm at bonfires before they die of frostbite.

Another great new feature is the new dynamic line-of-sight technology which the developers have called TrueSight. Objects on the battlefield that are higher than a soldier obscure your view like they would in real-life. If you want to see what is behind a building then you need to walk around to see. Environments are destructible so you can also destroy things to gain a better line-of-sight. However destroying a building means it’s no longer there for you to garrison so you need to think carefully about your tactics. It might be better for instance to throw a smoke grenade for temporary cover.

Once you’re done with the single-player, which will easily eat up 15 hours for most players, there is still plenty to keep you occupied. The multiplayer supports two teams of between 1 and 4 players each who must do battle until the other team runs out of points. There’s a matchmaking system in place as well as custom games. An army customiser lets you play with your loadouts, pick your commanders and monitor your progress in unlocking bulletins which give you a boost and advantage on the battlefield.

There’s also the Theater of War missions to play through which are grouped into solo, co-op or AI battles. These special challenges are some of the most fun and challenging in the game. In many ways they act as a bridge between the single and multiplayer modes.

A really neat feature is that the developers have chosen to include Twitch support. This allows you to instantly broadcast your gameplay on Twitch for others to see. Gamers who already like to broadcast their games will appreciate this functionality being built in. It’s also a perfect opportunity for those new to broadcasting to give it a try without the need to mess around with all kinds of screen capture software or hardware.

Company of Heroes 2 had a hard act to follow with such a critically acclaimed first game. Fortunately it was worth the wait and while maybe not as ground-breaking as the original Relic have done an outstanding job. If you’re a big fan of the original, enjoy RTS games or just have a love of all things World War II then Company of Heroes 2 is essential.