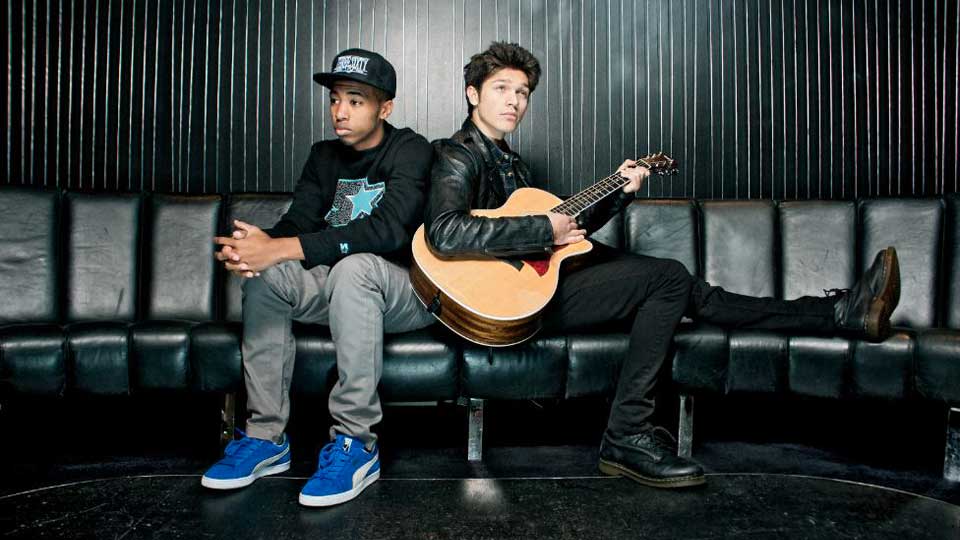 New Jersey rock and rap duo Tyler N Stevie have found themselves a solid fanbase by releasing their music and covering well-known songs through YouTube.

Now the duo are release a free download of their track Replay and they’ve been in the UK to promote it. They are currently working on their debut album and have been working with The Voice star Karl Michael.

We talked to the guys to find out more about their music, their approach to building a fanbase and their plans for the future.

How are you guys today? Is London treating you well?

T: Today is great, we’ve had a really good session. London is treating us well, there’s a lot of temptation here, but we’re behaving! Also this damn weather is depressing, how do you deal with it?

You’re currently in town to promote the release of free download Replay. Tell us about the track and why you decided to give it away for free.

S: Reply was one of our first tracks we recorded. We like it but we feel we’ve really developed our sound within the last few months, so this is a little free teaser for people to listen to whilst we make our new songs. So STAY TUNED!!

You’ve quickly grown your fanbase through your YouTube channel. What made you decide to build your fanbase in that way?

T: YouTube is a great way to establish yourself as an artist (look at Conor Maynard) but we never thought it would of gained us the fanbase it did. Don’t hold us to this but Youtube acts as a record label, releasing your music for the whole world to see. Plus we thought starting a YouTube channel would get us girls, which by the way. it did.

How did you guys meet and when did you decide to pursue music?

T: I heard Stevie was a rapper, and I slightly knew him through our drama club, so one day I was too lazy to write a verse for one of my songs and asked him to finish it off. After that Tyler & Stevie’s lovechild was born ‘Tyler N Stevie’

How would you describe your sound to someone who hasn’t yet heard your music?

S: The best way is to imagine a black guy with a white guy and put a musical stereotype together and that is us. Tyler is a guitarist and rock singer and I’m a rapper, so we have a bit of diversity.

Give us an insight into what you’re like in the studio. What is the dynamic between the two of you like?

T: It’s interesting in the studio, we have fun, talk about stupid stuff and from that the music is made. Every session we have to perform for the producer so they understand our sound and what we’re about.

You’re currently working on your debut project. What can your fans expect?

S: Expect the unexpected, the producers we’re working with have all had musical success, so we’ve got a mixture of really cool tracks, maybe something the fans haven’t heard before?! But in the meantime you’ll have keep guessing…

You’ve been working on material with The Voice star Karl Michael. What can you tell us about that?

T: Karl is a genius but nuts! We have a great friendship with him, so working together is always fun and somehow we manage to get a load of work done, then we go to the pub and don’t drink much, before going to bed extremely early. By the way I will find a way to vote for him from America – Team Karl.

Your fans are called ‘Stylers’. What is a typical ‘Styler’?

T: A typical Styler is sexy, dedicated and extremely loyal. We actually had two fans find us in London just by us uploading pictures to our twitter, that is what being a Styler is all about. Find us and chill with us

When will we see you playing some live shows here in the UK?

S: SOON! Can’t say much but something will be happening within the next two months. Hopefully you have us back for another interview and we can tell you more, otherwise your audience is missing out.

Advertisement. Scroll to continue reading.
In this article:Tyler N Stevie