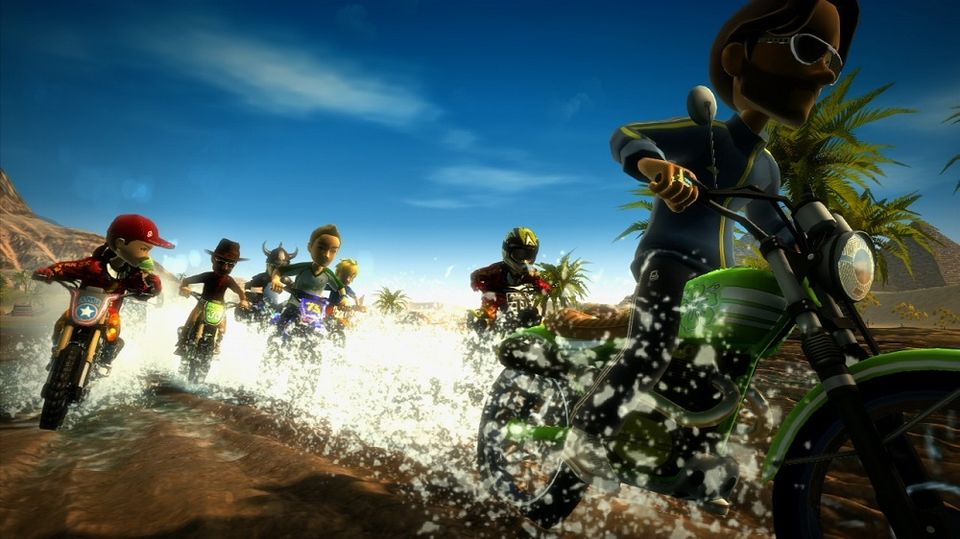 Motocross Madness first appeared on PC in 1998 and was followed by a sequel in 2000. The games were rather popular at the time and published by Microsoft Games with Rainbow Studios handling development. Rainbow went on to be bought by THQ and ended up looking after the MX vs ATV franchise. Now Microsoft have brought the game back with the help of Austrian-based indie developers Bongfish.

Right from the start it’s clear the aim of the developers was to create a fun title rather than a serious simulation. The game features bright and colourful cartoony graphics and uses your Xbox Avatar as your rider. We loved the automatic Avatar feature which just works without any need to set anything up. However we still felt the need to go and tinker with our Avatars so they looked just as we wanted. This is also one of the few games to feature Avatar FameStar support.

Motocross Madness is focused on arcade-style Motocross racing which means fast moving bikes, huge jumps, crazy stunts and very forgiving physics and handling. The game opens up with a hands-on tutorial that teaches you the basics of controlling your bike, taking jumps, drifting, boosting and simple tricks. Initially the handling feels a bit too over the top but a few minutes is all that is needed to get to grips with it.

The career mode features four types of events which are Race, Rivals, Exploration and Trick Session. Race is your standard x number of laps to win, Rivals lets you race ghosts in special challenges, Exploration lets you full explore the environments to find all the hidden coins and secrets. Finally Trick Session is all about performing and learning new tricks.

The game has three environments to race in which are Egypt, Australia and Iceland and each of these has three tracks to race on. Races are fast and fun with a surprising amount of freedom on offer. There’s no single racing line to stick to as the tracks are littered with alternate routes and optional jumps and detours. This makes the action frantic and also keeps things fresh.

The more you play the more experience you earn and the higher you’ll level up. Levelling up unlocks things like tracks and events but also earns your Avatar Motocross kit to wear. However this is optional and you can bring along your favourite Avatar Marketplace kit too.

In addition to the single-player you can race a friend in two-player local split-screen or go online for 8-player fun. There’s also a feature called Bike Club that automatically sticks you and your mates together with a bunch of Tasks to complete. This also automatically tracks everyone’s progress and issues challenges to club members when someone sets a new record.

Unfortunately we’ve been having one big problem with the game which is really annoying. Most times when we try and launch it the screen goes black and nothing happens. The only way around this is to turn the Xbox 360 off and try again. Usually it seems to run after a few tries but this is unacceptable and we hope that a patch is issued soon to remove the problem. Once we get into a game we haven’t had any issues.

Motocross Madness is packed with content and fantastic value for the price. It’s a perfect family game and a must for bike racing fans.

Motocross Madness is available now on the Xbox LIVE Marketplace for 800 Microsoft Points.