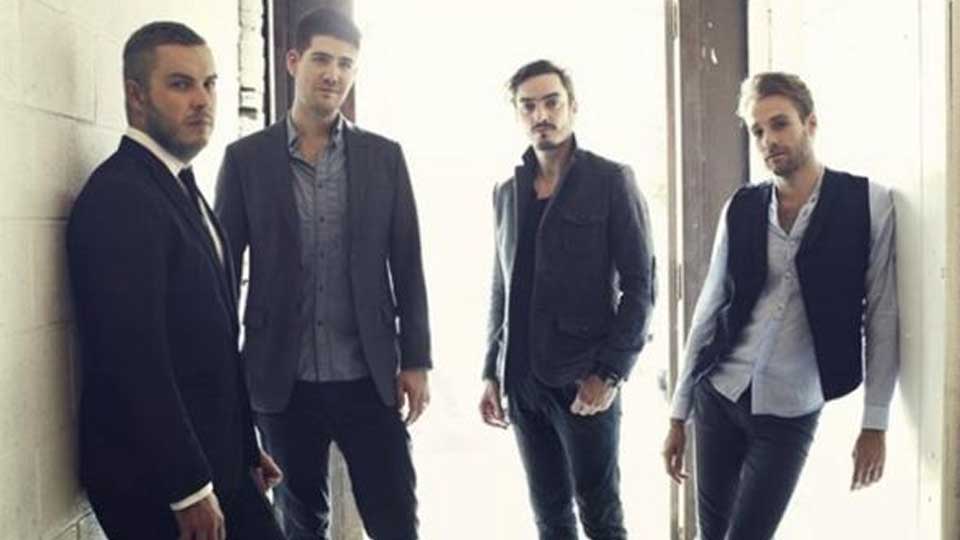 They are quite an interesting mix. How many bands can you name that are made up of one part Nashville, to three parts South African? Throw in some gorgeous vocal harmonies, a keyboard player who glides through the tracks, a drummer that gels the band together and a singer who has been likened to artists such as Thom Yorke and Jeff Buckley, which might just be the icing on the cake? Don’t you think that is sounds a bit like we’re describing a recepie that has been handed down through generations here when we introduce them to you like that? In a sort of home-made cake mix kind of way, that comes recommended by your neighbour? Well, Civil Twilight do come recommended by our neighbours across the pond (yes, that rather large pond that seperates us from the US!), they are a combination who are a tasty mix and a mix that definitely work.

Their new album Holy Weather, has received a great deal of critical acclaim in the US and we’re looking forward to its launch here in the UK. They are not that well known yet here in the UK, although we feel that this is about to change for them, in a very big way. You may have subconsciously heard some of their songs already, as they have been featured on a number of huge television shows, such as House, Vampire Diaries and One Tree Hill.

Having just landed back in the UK, we caught up with a slightly jet-lagged and pretty humurous Civil Twilight, ahead of the launch of their new album, Holy Weather, which is launched here in the UK on 29th April 2013.

Welcome to London guys! How are you all doing today?

Well, we’re all very jetlagged, but thanks!

Finding out about your backgrounds, we learn that Steven, Andrew and Richard grew up in Cape Town, what sort of place was that to grow up in and how did you know each other/meet each other in Cape Town?

Steven: Well, we met in school. I met Andrew in hospital (we’re brothers!) Andrew and Rich met at school and then we formed a band when we were really young, probably thirteen or fourteen years old and we just kept on playing. It was very beautiful and very inspiring, the nature and beauty is very inspiring and that found its way into our songs and still does.

Richard: South Africa is very culturally diverse as well, there’s an interesting mix of European and African culture there and it is a place which has quite a vibrant ethnicity.

Steven, Andrew and Richard what made you want to re-locate from Cape Town, to L.A. initially?

Steven: We didn’t want to attempt at being South Africa’s biggest band, we wanted to bypass the whole hitting the ceiling moment that some South African bands end up having to go through, we just wanted to bypass that and go overseas early, to see if we could make it in the biggest city and I guess we’ve always wanted to move and tour in America.

Richard: The South African scene is very small, there’s only a handful of cities that you can tour so at some point if you want to have a career in music, you need to reach beyond and at the time, when we were young, there weren’t too many South African bands doing a lot in other countries.

Andrew: There are only about ten bands in South Africa!

Richard: But we do love South Africa!

Where did you all meet Kevin? Was it a natural progression to then invite him to join the band and Kevin did you say yes straight away?

Richard: We met him in Nashville through mutual friends and Andrew and Kevin were room-mates for a while and then Kev was doing a lot of musical stuff. We worked on a couple of things together, then when we made our latest record, we were looking for a fourth member and there was Kev!

Kevin: Yes, I would say when the guys asked me to start playing with them, it was sort of like we did a little test run together to see what our musical chemistry was like and it seemed pretty good. I had just got married, like six months before I think, so I told the guys, as long as I could bring my wife out on the road for a little bit, then I would join the band and they agreed to my ultimatum! It has been a lot of fun!

How long have you been together as a band?

Steven: Andrew, Richard and I have been together for way too long and Kev’s been with us for a year and a little bit.

What do you think has been the best gig that you’ve done/enjoyed the most to date?

Steven: I find that going back home to Cape Town and South Africa is always special. For me, nothing beats playing in your hometown and home country, with all your family and friends there and the response there for us has been amazing. However, perhaps the Borderline last Tuesday in London may have been the best gig of our lives!

Who were your musical idols when you were growing up?

Was music something that you all always wanted to do and to have a career in?

Steven: For me, yes. Since I was about fifteen or sixteen years old, I knew that music was exactly what I wanted to do, so personally, yes.

What sort of place is Nashville like to live and work in? Many artists are now choosing to go and work in Portland, which is being dubbed as ‘the new Nashville’, do you have any plans to work there?

Richard: There are a lot of talented people in Nashville there, we found Kev there! A lot of artists, a lot of singer-songwriters, you could go to just about any bar and see decent music almost anytime really.

Richard: It’s kinda a different scene, huh? I don’t know the Portland scene very well, each city has its own thing and it rains a lot in Portland!

Kevin: I’d like to work in Portland, there’s good food and good people there. There are some really talented producers and musicians there, such as Bill Frazell, who is in Portland.

What has it been like to open shows for the likes of The Flaming Lips, Florence & The Machine and the Smashing Pumpkins?

How was the experience of performing at so many different showcases at SXSW?

Steve: We did like 7 or 8 showcases I think and it was exhausting but it was just a whirlwind week you know, it is what it is. It’s a booze fest, people do more drinking than anything else really but it was fun. I think it’s a really good place to actually get in touch with where the music scene is at, who’s out there, what styles are being played with, get in touch with the development of modern music. It’s one of the few festivals that really puts you in the middle of what’s going on.

Rich: That’s true, because most festivals are sort of a select scene, SXSW is a conference, it’s a whole spectrum of bands.

Your album is to be launched in the UK shortly, what sort of tracks can we expect from Holy Weather?

Steven: You can expect some sultry soft rock!

Kev: It’s a little bit like electronic and experimental than the first record that you may have heard over here. Holy Weather’s very moody and rhythmic.

Rich: We worked with a producer from England actually, Mr. Dan Carey. He has worked with some really cool artists Hot Chip, Franz Ferdinand, La Roux and Bat For Lashes.

Steven’s falsetto has been compared to as a cross between Jeff Buckley and Thom Yorke, what do you think about that?

Rich: Steve has a great voice, a beautiful sound.

Steve: I think it’s great, wonderful. Those are amazing singers.

Rich: They’re great singers, we were just talking about Jeff Buckley the other day and about how much we love the record, ‘Grace’, how amazing it sounds, especially on vinyl.

What’s coming up next for the band and what are your plans for the summer?

Steven: After this trip, we go back to Nashville and we’re going to start writing the next record actually. We have a few dates scattered around here and there, doing some festivals mainly throughout summer. Other than that, we’re just going to be working hard on the next record, making sure it’s as good as it can be. I know that sounds funny as our album doesn’t come out until April 29 here in the UK, but we’re just keeping the ball rolling.

What are your hopes for the future of the band?

Steven: I hope that the next record doesn’t suck and we can carry on building our fan base and making beautiful music!

Kev: I would love to get in the rock and roll hall of fame. I would like for something I’m part of to be hailed as really influential along the timeline of music. If I could be in a band that somehow, we did something totally fresh that changed everyone’s outlook, or even a small demographics outlook on. I think that’d be a dream and normally Rock and Roll Hall of Fame artists do something really groundbreaking that hasn’t been done before. That’s my hope at least, to break new ground and be the boss of the new wave.

Steve: I’d love to be inspiring to young musicians, young creative minds. I’d love to just light them on fire, like the way some artists did for me when I was growing up, I think that’s a good feeling.

All: Thanks for the interview.