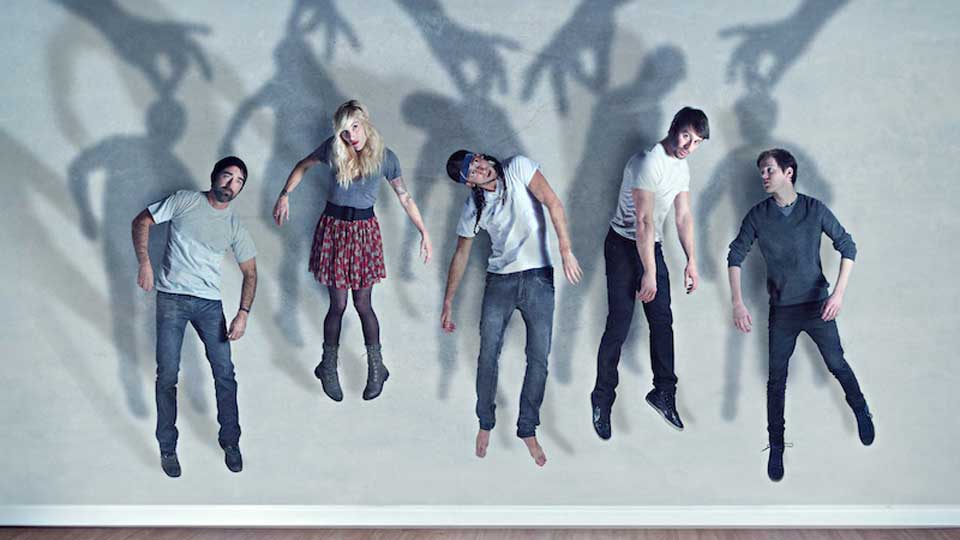 Walk Off The Earth, are the band with the No. 2 YouTube video of 2012 (with over an incredible 145 million views), thanks to their unique ideas and THAT guitar. If you haven’t seen it yet, it’s well worth a look, we haven’t seen anything like it! The band cover Gotye’s Somebody That I Used To Know, by playing one huge guitar, that five band members play on, all at the same time! Walk Off The Earth are ready to release they debut album onto the European market, ahead of their sold out European tour. They have very quickly amassed an incredibly loyal fanbase, with over 1.2million subscribers to their YouTube channel and over 684k fans on Facebook. It is these new tracks that have now got everyone buzzing with preview videos already surpassing the million-view mark. We don’t think that there’s any other band with such a huge following and buzz around them, as much as these guys. Walk Off The Earth features multi-instrumentalists Gianni Luminati, Marshall, and Sarah Blackwood on vocals, Taylor on keyboards, and Joel Cassady on drums.

R.E.V.O is a reference and acronym to the band’s motto, which is Realize Every Victory Outright, the song is a shouty pop anthem, which reminds us a bit of the Ting Tings. Red Hands opens with a nice xylophone and the sing-a-long lyrics remind us a bit of the Lumineers, it’s a really great song and very catchy – we could see a sea of fans singing this at the top of their lungs at their concert. The fact that the band share lead vocals give them an interesting sound and they can mash up on a variety of songs. Gang of Rhythm has a very catchy chorus and the over-laying on the vocals and Africa-theme in parts of the song makes for a very joyous and uplifting anthem, with some very happy lyrics. Speeches opens up with what sounds like a mandolin mixed with a harmonica faintly in the background, the chorus is very fast and really catchy again – we see a theme going on here, this album is full of catchy tracks, one after another!

Sometimes has very some quirky lyrics, we won’t ruin it for you – you’ll have to take a listen! Shake opens up with Sarah’s gorgeous vocals and shows her taking the lead on the track, on what is a another great pop song, a lot gentler than the rest and the song suits her voice, that anthemic sounding vocal during the chorus continues on this song. The album features their immensely popular cover of Gotye alongside 10 original songs and the song really works on the record and they fully do the song justice, we can only imagine how much fun this would look and sound live with THAT guitar, it’s a lovely cover. Summer Vibe and Money Tree continue what we feel is the theme of this album – great songs, with a sing-a-long, fun and anthemic chorus! No Ulterior motives has a very laid-back, which has an almost reggae feel and it reminds us of being on a beach, with a cocktail in hand, looking at the ocean, with the sun beating down. Nice!

We are pleased to say that this album proves that the band are able to write their own, original, hooky, pop mash-up’s with huge choruses. They are so much more than the band who are perhaps a little more famous for their covers to date, than for their original work. Long may they continue to provide us with fresh, original ideas and continue to come up with quirky offerings that set them apart from any every other band on the music scene at the moment. This album is a great feel-good album and it’s also a lot of fun!

Advertisement. Scroll to continue reading.
In this article:Walk Off the Earth