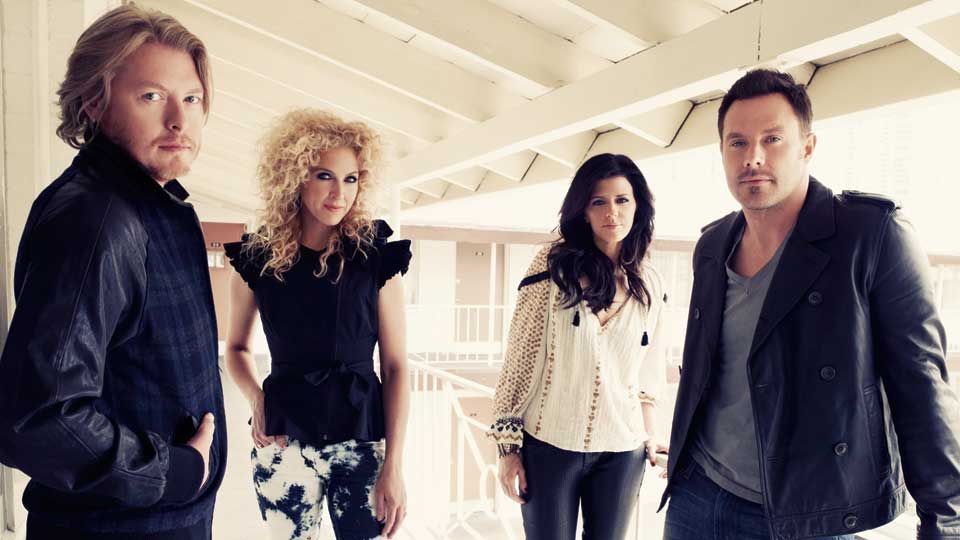 Little Big Town may be relatively unknown here in the UK but in the US they’ve been climbing the country charts since their self-titled debut album back in 2002. The four-piece country band has scored two US Country number one albums over their career to date and scored their first ever US Country number one single with Pontoon in 2012. Little Big Town are now starting to make waves since performing at the first ever C2C: Country To Country festival at The O2 Arena last month so we thought we’d check out their recently released fifth album Tornado.

Tornado contains 11 new recordings including the US hits Pontoon and Tornado, and showcases the band’s knack for a catchy tune as well as impressive harmonies. One of the things that separates Little Big Town from other country bands is that all four members – Karen Fairchild, Kimberly Schlapman, Phillip Sweet and Jimi Westbrook – share the lead vocals over the course of the album. Rather than each of them taking a line here or there, each member leads on different tracks with the others providing harmonies.

The album opens with Westbrook taking the lead on the uptempo beat-driven Pavement Ends before making way for hit single Pontoon. The track is about having a party on a pontoon (which is a boat-like object that can float on the water and bear heavy weights in case you didn’t know) and has a laidback summery groove. Fairchild takes the lead vocal on this one with her husky deep vocal seducing the hell out of the melody.

Elsewhere on the record the gently lilting Sober uses alcohol as a metaphor for being in love with someone and features Schlapman on lead vocals whilst Sweet shines on the bluesy Front Porch Thing that mixes in elements of gospel for one of the album’s most powerful moments. Your Side of the Bed, which is the next single in the US, features Fairchild and Westbrook (who are actually married) singing about the breakdown in a relationship as two people grow apart from one another.

Something that Little Big Town can never be accused of is lacking variety. Tornado explores different facets of the country genre taking in rock, folk and a little bit of pop. There’s a bit of a Fleetwood Mac feel to a couple of the songs on the record. The mid-tempo Leavin’ In Your Eyes recalls the iconic band’s harmonies whilst the stripped-down Can’t Go Back is the kind of ethereal folk that they pioneered in their heyday.

Our favourite moment on the album is the title track and current US single Tornado. Fairchild once again takes lead vocal duties as a moody beat provides backing for a cautionary tale about a woman scorned by a cheating man. Scorn often makes for the best country tracks and Tornado is a fine moment that requires the repeat button on your music player.

Little Big Town piqued our interest at C2C: Country To Country and we’re glad we decided to look up their latest album. Tornado is an album that is rich with variety and strong melodies. It’s rare that a band has four strong lead vocalists in it but Little Big Town has just that. Tornado is being hailed as the band’s finest work to date and the quality is undeniable. There’s plenty of material here that could crossover into the UK mainstream and prove that country music isn’t all thigh-slapping and yee-hawing.

Advertisement. Scroll to continue reading.
In this article:Country to Country, Little Big Town