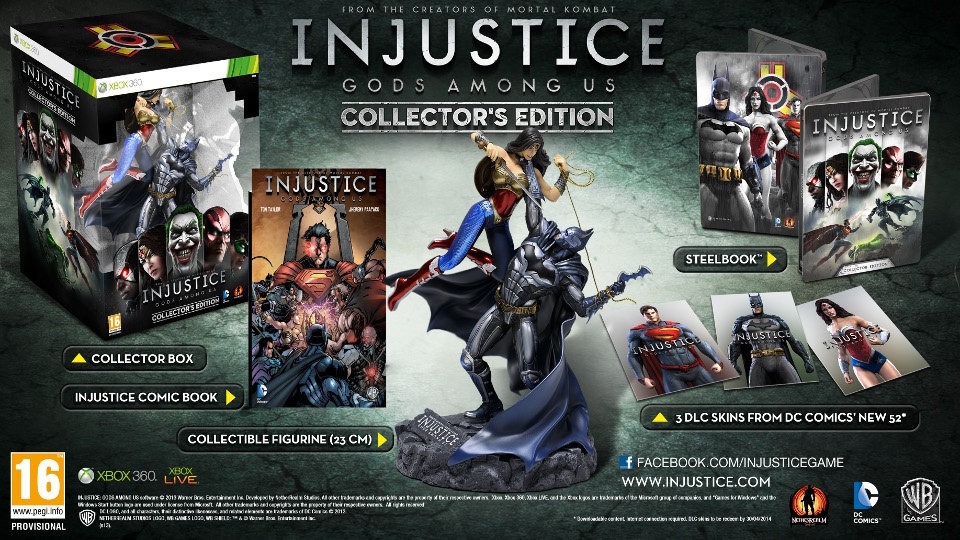 Warner Bros. Interactive Entertainment and DC Entertainment have confirmed Injustice: Gods Among Us will be released in Europe on Friday 19th April, for Xbox 360, PlayStation 3 and Wii U.

Injustice: Gods Among Us is an all-new game in development by award-winning NetherRealm Studios, creators of the definitive fighting game franchise Mortal Kombat. The title debuts a bold new fighting game franchise that introduces a deep, original story featuring a large cast of favorite DC Comics icons such as Batman, Green Arrow, Cyborg, Harley Quinn, Nightwing, Solomon Grundy, Superman, The Flash, Wonder Woman, The Joker and many others. Set in a world where the lines between good and evil are blurred, players will experience heroes and villains engaging in epic battles on a massive scale.

Details have also been released of the Injustice: Gods Among Us Collector’s Edition, which will be sold separately for £74.99, (€99.99) at retailers throughout Europe for the Xbox 360 and PS3.

The International Injustice: Gods Among Us Collector’s Edition will include:

Also now available is the new Injustice: Gods Among Us digital comic book from DC Entertainment. The comic is a prequel to the game, and it tells the story of events leading up to a new world order where heroes face each other in an epic fight to determine humanity’s future. You can download Injustice Gods Among Us #1 at ReadDCEntertainment.com, through the DC Comics app, or on the iBookstore, Kindle Store or Nook Store.

EF will bring you more details on the game nearer launch but to find out more information you can visit www.injustice.com

Greg Ellwoodhttp://www.entertainment-focus.com
Greg is the Deputy Editor of Entertainment Focus. He writes about Games, Tech and TV. You can find him on Xbox/PSN/Steam as Tahllian.
Previous article
Namco Bandai announces Tekken Card Tournament
Next article
3rd generation OPC at Winter NAMM 2013