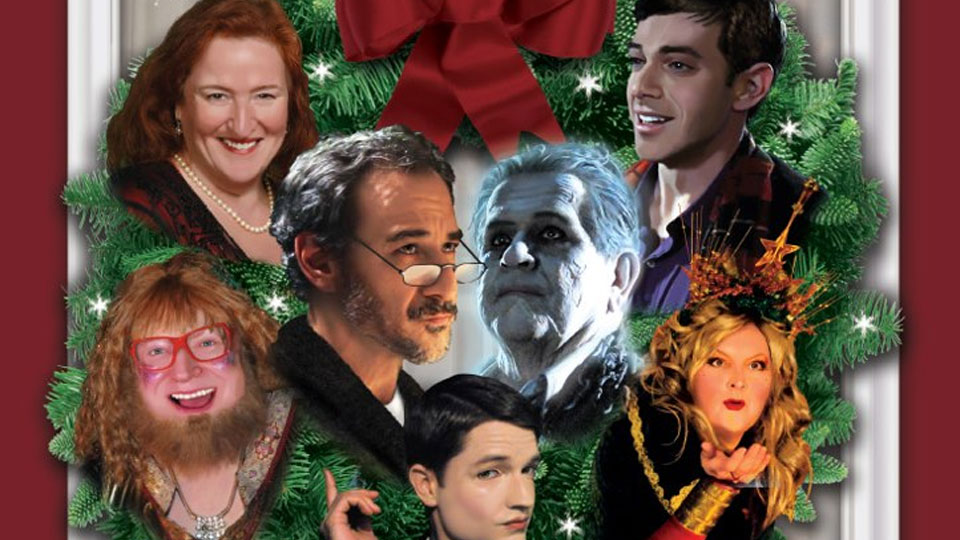 Ebenezer  Scrooge (David Pevsner) is the owner of a piano bar with a hatred for Christmas and all its festivities. After forcing his employees to work long hours for little reward, Scrooge is visited by his former business partner Marley (Tim Kazurinsky) and three ghosts; Christmas Past (Ronnie Kroell), Christmas Present (Megan Cavanagh) and Christmas Future (Jojo Baby). As he revisits pivotal moments in his life, will Scrooge see the error of his ways and change his outlook on life?

Scrooge & Marley is a gay reinterpretation of Dickens’ classic tale. The source material has been used for countless movie and TV adaptations but we don’t think there’s ever been a gay one before. Set in the present day Scrooge & Marley finds Ebenezer ‘Ben’ Scrooge miserable and angry at life following the free-fall he went into after his parents discovered he was gay and threw him out of the house.  Throwing himself into the club scene Ben soon started to change into a nasty piece of work alienating his boyfriend and the people around him. In present day he’s disliked by all of his employees and known for getting his kicks out of making people miserable and firing them.

It’s true to say that what transpires over the course of Scrooge & Marley won’t be a surprise to those familiar with A Christmas Carol but there’s plenty to enjoy about the film. The story zips along at a fast-pace and there’s a surprising amount of emotion packed in. As Scrooge starts to see the person he could have become you can’t help but feel sorry for him in light of the events he went through. Rather than channel his anger into doing good he is seduced by power. The finale is wonderful, moving and perfectly fitting for this lovely story.

David Pevsner is perfect as Scrooge bringing a believable amount of misery to the role. He almost snarls his dialogue with a permanent look of dissatisfaction on his face. He’s a great contrast to the adorable Bob Cratchit (David Moretti), one of his employees who just wants to earn enough money to support his partner and their children (one of which is sick). Moretti is best-known for his role in hit LGBT series The Lair and it’s nice to see him doing something a little more aligned to reality. Ronnie Kroell puts in a superbly camp performance as the ghost of Christmas past who uses poppers to transport Scrooge from one memory to another.

Perhaps the point where Scrooge & Marley really succeeds is depicting gay relationships and characters in a way that doesn’t make them feel like tokens or box ticks. Christmas is a time for everyone and that runs throughout the movie leaving no one excluded. Often in festive films you see the traditional representation of a family which is inevitably heterosexual. Scrooge & Marley shows that gay or straight, we all have similar life experiences and we can all relate to one another. Maybe this Christmas we can all hope that one day we will live in a world as tolerant as the one we see in this wonderful movie.