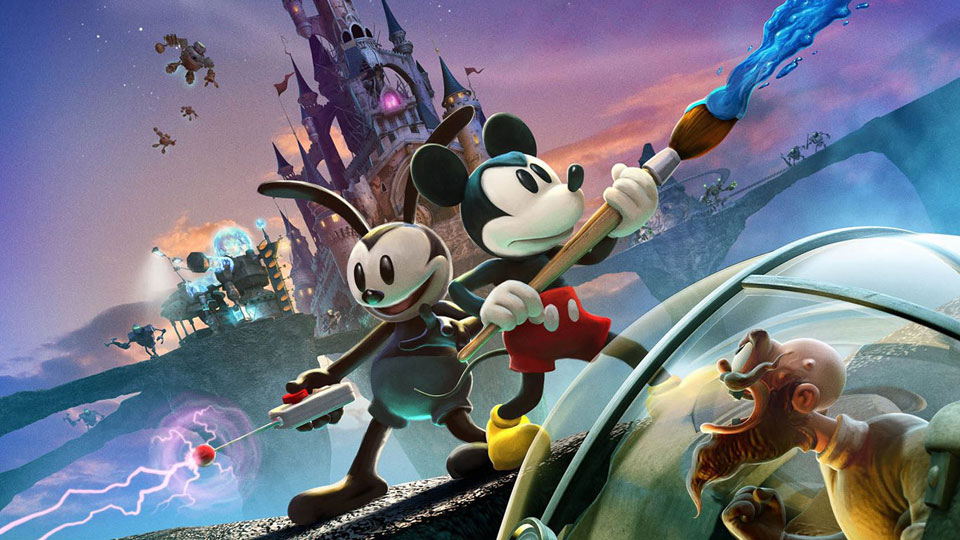 Disney Epic Mickey was released in 2010 exclusively for the Wii console. Critics and gamers alike raved about the inventive and innovative game, whilst we were a little more reserved in our praise citing bad camera work as one of our main complaints. Two years on from that game Disney Epic Mickey is getting a sequel in the shape of DisneyEpic Mickey 2: The Power Of Two. This time though the game is being released on multiple platforms rather than just the Wii.

For the purposes of this review we’re talking about the PS3 version. Disney Epic Mickey 2: The Power Of Two is set some time after the original game following Mickey’s defeat of the Mad Doctor. At the beginning of the game The Mad Doctor returns to Wasteland and claims to have changed the error of his ways. He offers to work with Oswald the Lucky Rabbit to help repair the damage caused to Wasteland by recent earthquakes. Soon doubt arises over the Mad Doctor’s miraculous turnaround as the damage to Wasteland gets worse. Worried by this, Oswald’s girlfriend Ortensia turns to Gus The Gremlin and the pair decide to contact Mickey. Mickey returns to Wasteland determined to get to the bottom of the Mad Doctor’s claims and help Oswald.

There’s quite a bit of narrative to get through at the start of the game but that proves to pretty entertaining. Visually the game and the cut-scenes look stunning and there’s actual voice acting throughout this time. The Mad Doctor refuses to speak preferring to sing his way through his lines and encourages everyone else to do the same. The look-and-feel of Disney Epic Mickey is present for this sequel and it will feel familiar to anyone who played the game the first time round.

The graphics are very much in the same vein as Disney Epic Mickey and the majority of the game takes place in roaming 3D environments. It really does feel like you can explore anywhere you want and isn’t as limited as the original game. As is expected you spend your time collecting object, battling enemies and solving puzzles. Armed with thinner and paint, Mickey needs to use these to aid his exploration of environments and solve problems. These include things like taking away house walls with thinner to get inside buildings and painting scenery to restore an environment to its former glory. You can also enter various shops and buildings to interact with the character inside. They task you with missions to complete often in exchange for rewards that will help you progress with other parts of the game.

Something that is new with Disney Epic Mickey 2: The Power Of Two is the inclusion of side-scrolling levels. With more than a nod to LittleBigPlanet, the levels shrink Mickey and Oswald down placing them in very detailed and busy environments. During these levels there are puzzles to solve and there’s some innovative ways of getting from A to B such as scrambling across moving records or becoming the ball in a pinball table. The variety is a plus, even if it’s not wholly original.

The biggest change this time round is in the inclusion of Oswald as a second playable character. He can be controlled by another gamer or you can let the CPU control him and assist you onscreen. The best way to play is with somebody else though as allowing the CPU to control him still requires you to get him to do things; something which isn’t always terribly clear and caused us to almost pull our hair out several times. Pressing the circle button forces Oswald to interact with you and you can throw him in the air and use his feet to glide across platform gaps. Oswald has his own set of skills based more around mechanics and electricity so it’s important to keep that in mind when scratching your head over the game’s many puzzles.

The camera has improved this time round. In Disney Epic Mickey it was a constant source of frustration as the camera often pointed in really odd directions making it near impossible at times to see what you’re doing. This time round the camera feels freer but be warned we experienced a bit of motion sickness from time-to-time and had to take pauses in the game.

Disney Epic Mickey 2: The Power Of Two is a more refined gaming experience than its predecessor. It’s clear that the complaints from the original game have been taken on board and for the most part rectified. The game is massive and hugely enjoyable but be warned that it can be very frustrating at times due to the lack of clarity as to what you are actually supposed to be doing. Having said that, kids will lap it up and enjoy the eye-catching visuals which feature plenty of the characters from Disney’s extensive catalogue.