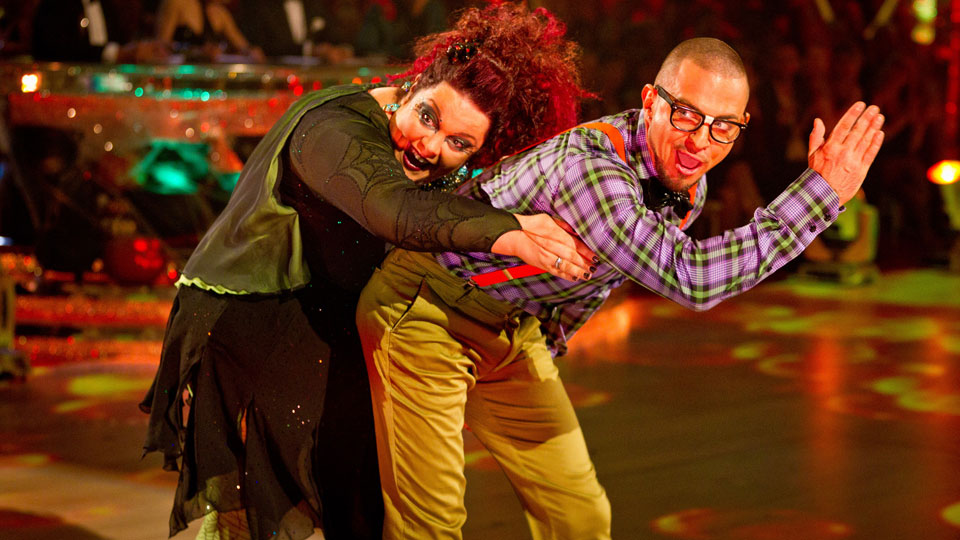 Four weeks into this year’s Strictly Come Dancing and the competition is getting pretty intense. Last week Team RiRo performed the Charleston and came under some criticism from the judges despite scoring high on the leaderboard.

This week Lisa Riley and her partner Robin Windsor will be switching from fun to serious as they dance the Tango.

We popped down to the rehearsal studio yesterday to see them in action and took the opportunity to get our weekly update from Robin. He talked to us about last week’s performance, updates us on how the Tango is coming along and has a special message for Team RiRo supporters.

Last week you and Lisa performed the Charleston. How did you feel about it?

Last week’s Charleston was frenetic as anything. Everything from the ankles up went brilliantly but unfortunately Lisa lost her swivels which is what the Charleston is all about. I said on the show on Saturday that I took full responsibility for that because she was slipping everywhere on the floor and we had a couple of dancing tricks where I was jumping upside down so I needed her to be sturdy and not slip on the floor. I put rubber soles on the bottom of her shoes not realising that it was going to hinder her swivel action. In rehearsals it was there, she did it and it was perfect but on the night it didn’t work and it was my fault.

As you know we were in the studio and the audience loved it. You got a standing ovation again…

That Charleston for me is one of the most entertaining that there’s been for a while. It was fun and that song was so infectious, as much as we all hate it because it gets stuck in your head for hours and hours, I listened to that song about 500 times in one week so you can imagine what I thought about it by Saturday night! To have the audience up on their feet again for week 4 was amazing. It’s really amazing to know that the public are behind us, supporting us and just enjoying what we’re doing.

This week you’re dancing the Tango…

Yes! This week we’ve got the Tango so bye bye goes all the fun aspect of everything and it’s all about me and Lisa being serious and getting into that sultry flavour of the dance. Of course we’ll be adding our own little tongue-in-cheek bit in there somewhere because it has to be done.

This is your second ballroom dance, and therefore serious dance, of the show isn’t it?

The Viennese Waltz, even though it was a serious dance, it had a great story to it. There was a little touch ofCinderella and the public just loved the fact that they could relate to what was going on. This one doesn’t really have an underlying story to it and it’s just a pure Tango from beginning to end. It’s what people want to see Lisa do to show she’s not just a one-trick-pony with all the fast armography and everything like that. The routines do perhaps blend a little bit so we just want to do something this week that people aren’t going to expect and show a different side to Lisa.

What song are you dancing to this week?

We’re dancing to Let’s Stick Together by Bryan Ferry.

That’s quite a funky tune for a Tango isn’t it?

Well Jerry Hall was actually in the pop video for it so we dedicate this dance to her this week as she’s not here with us anymore.

We were sad that she went so early…

She was brilliant. She wasn’t the best dancer but personality wise she was brilliant but it didn’t come across on camera so well. She had these amazing one-liners that had everyone in stitches backstage. She wasn’t necessarily trying to be funny, it was just the accent and the way she said things with her drawling accent. It just made everyone laugh and we miss her.

Let’s have an update on Lisa’s feet. She was having trouble a few weeks back but last week they seemed to be getting better. How are they this week?

Lisa’s feet are much better. The corns have gone, well almost gone, and the pains in the bottom of the feet are gone. She’s put some little jelly inserts into the bottom of her ballroom shoes and for now they seem to have solved the problem of sore feet. Today I’ve had her in her ballroom shoes all day and she hasn’t complained once; that’s a first (laughs). You will have all seen that I did prove a point that they can’t hurt that much because I wore a pair of Latin shoes for a whole afternoon during our jive.

We ask you every week about your chances in the competition so this week we’re going to switch it round slightly. Who do you think is your biggest competition?

What’s amazing about this series is the standard of everybody and it’s been like that from the beginning. For me you’ve got the likes of Denise and Kimberley. Dani is very under-rated. I think she’s absolutely wonderful and I think she’s going to go really far. I don’t think people have seen her potential. When I watch her I see her as one of the biggest candidates, just because of how she executes the dances. I think she’s fantastic. I think there’s a much stronger feel on the lady front this year – Kimberley, Denise, Dani, Lisa, Victoria – all of a decent standard. Whereas the, boys Louis is the complete standout at the moment so everyone has to take it up a notch to catch him up.

Michael is an absolutely beautiful ballroom dancer. I watched him and I just felt proud for him because it was a really beautiful dance. For someone to go from having the worst Jive in Strictly history to having an absolutely incredible Quickstep was awesome. I know he has another ballroom dance this week so he’s going to excel at that. His downfall is his Latin so if he spends time working on that he can build himself up. This is a competition overall of the Ballroom and Latin dances so you need to excel at both of them.

Now we’re four weeks into the show what message do you have for our readers and supporters of Team RiRo?

I can’t thank all the readers and supporters enough. You guys voting for us, supporting us and just acknowledging everything we’re doing, makes it an even more magical experience knowing there are so many people behind us.