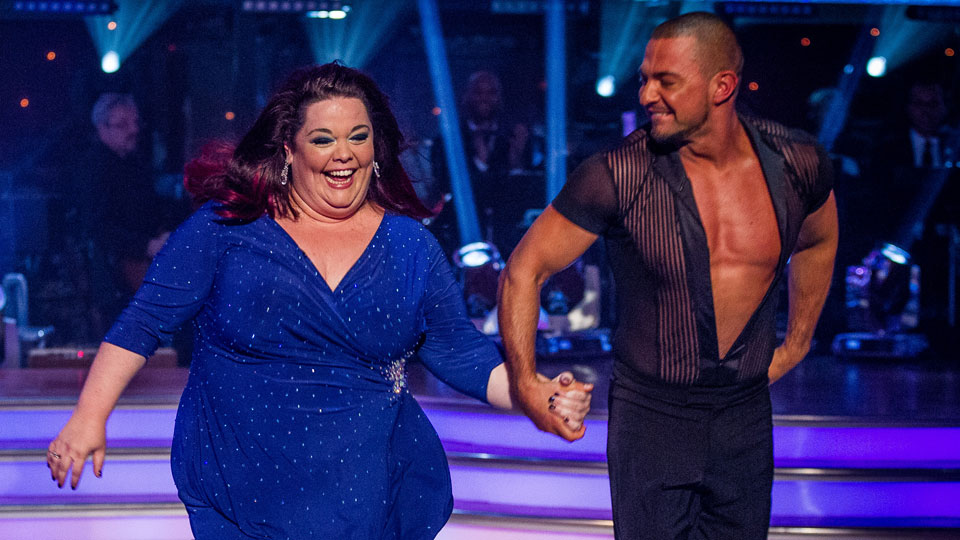 Robin Windsor returns to Strictly Come Dancing for his third year and has established himself as one of the most popular male dancers on the show. In his first year he arrived on the show with fellow professionals Artem Chigvintsev and Jared Murillo, and was partnered with actress Patsy Kensit.

Last year Robin was paired with EastEnders legend Anita Dobson and the two wowed the judges with their routines and energy. For the latest series of StrictlyRobin will be dancing with former Emmerdale actress Lisa Riley who is best-known for her role as Mandy Dingle in the soap.

We gave Robin a call to find out how he feels about his latest dancing partner, discover how the training is going and see if he’s confident that Team RiRo will walk away with the glitterball trophy.

How do you feel about Lisa being your partner this year?

As you can tell from the launch show I was ecstatic that I got Lisa as a partner. As you saw I ran down the stairs, picked her up and swung her round. I was really happy because in the group dance we’d all been doing a couple of days before, Lisa and me just struck up an instant friendship. It was the same feeling I had the previous year with Anita. I already felt there was a connection straight away before we’d been paired up so I was really happy.

Were you surprised to get Lisa or did you have an inkling that may happen?

I thought I might have an inkling that might happen just because we had been getting on so well together.  Surely the producers can see that in the background and think ‘oh they’d be great together’.

Where have you been based for training? It seems from Twitter that you’ve been all over the place…

Lisa’s been filming her last scenes for Waterloo Road up in Glasgow so I’ve had to be up there for a few days and now we’re in her hometown of Manchester which I love.

Has it been all about training at the moment or have you had time to have some fun too?

We’ve been rehearsing like crazy this week and Lisa’s really sore today. We had a nice glass of wine last night because we thought we really deserved it as we’d finished the routine and we were really happy.

Are you allowed to tell us what your first dance is going to be or is it all very top secret?

Yeah! Confident as far as Lisa’s picked up the routine. Now it’s trying to get all the technique into the routine which is the hard part. The routine is the easy part to put together but now it’s about learning how to do it. Quietly confident but you never know what’s going to happen on the night.

There’s some preconceptions that Lisa may not be a very good dancer but it seems from the launch show that she can really move. What’s been your experience with her so far?

You know what? This girl’s got rhythm and that is something that is hard to teach. If she can bring all that rhythm to the dancefloor I’m going to be more than happy.

Are you being quite adventurous in the way you choreograph the routines?

Coming in to choreograph the routine I thought I was going to have to make it really simple. As it turns out I’m able to make it a little more complicated than I was anticipating. Lisa’s picking it all up really well.

Obviously the dynamic is the most important thing with your partner and you had great chemistry with Patsy and Anita. What’s your dynamic like with Lisa?

Me and Lisa are basically having so much fun and such a ball. It’s the way I like it. When I teach somebody and I train somebody I like them to enjoy themselves as much as possible because they’re learning and having a good time at the same time. In a way you’re having so much fun that when it comes to the end of the week you realise ‘wow I’ve actually learned a routine’.

Are you excited to be finally heading towards the live shows? They feel a bit further off this year with the show kicking off in October.

I can’t wait for the first live show.  I’m anxious to find out how everybody else has been doing because obviously we’re all so far apart from one another and everyone has been working so hard in the training room. I can’t wait to see what everyone else has done and show off Lisa to the rest of the country so they can see how amazing she’s going to be.

Have you scoped out your competition yet? Who do you think is your biggest challenge?

There are the obvious favourites at the moment with Kimberley and Denise. They are already coming in with a high standard of dance so we’ve all got high expectations of them. It’s those that don’t have any dance background that are going to surprise people because there’s some natural talent in the bunch.

This is your third year on the show. Are you hoping for third time lucky?

Third time lucky! There’s space on my mantelpiece already for that glitterball so I’m hoping that this year I can put it there. Let’s face it it’s been gathering dust the last two years and it could do with a nice trophy to go on there.

How competitive is it really between the professionals? We’ve seen on Twitter that you and James Jordan have been enjoying a bit of banter.

There’s always banter between the boys. We’re all competitive because we come from a competitive dance background. It’s drilled into us. Of course we all want to lift the glitterball but for me my competition is to take it week-by-week and my goal is to get a bit further each week.

How’s the new professional Karen Hauer fitting in this year?

I knew Karen from Burn The Floor and as you can tell from the launch show she’s an incredible dancer and extremely hot. She really knows how to work it and she knows her stuff. She’s going to do extremely well with Nicky and knock him into shape.

Are you disappointed that show won’t be visiting Blackpool this year?

It’s a shame we’re not going to Blackpool this year because it’s the hub of ballroom dancing. I’m actually very happy that we’re going to Wembley instead because rather than dancing infront of 800 people there we can dance to 6000 people there and it’s an amazing feel. I can’t wait to get back there.

Does it feel strange translating ‘Strictly’ from a small studio to such a large arena?

When you first walk into Wembley it feels huge. When you walk on to do your dance it feels like it could be the studio or a rehearsal room because all that matters is you and your partner. It’s just you two in the middle of the floor and you have to block out that it’s a big space.

We guess it’s similar to the feeling you have when you walk out onto the stage for the ‘Strictly’ arena tour?

Yeah the moment you walk out onto the floor it feels like such a vast space and you think ‘oh my goodness there’s all these people’. What you’ve got to remember is there’s normally 12 million people at home watching and it’s just another watching you.

Your team name this year is Team RiRo. Where did that come from?

Team RiRo – yeah a bit like J.Lo. We just felt that a little double-barrelled name would be good and we wanted to be Team Fabulous because we are Team Fabulous or Team Sparkle. We figured wer had to go with our names so Team RiRo works perfectly.

We’ve noticed this year that you’ve got a lot of fan Twitter channels. What’s that like for you?

I’m really happy that there are so many fans all of a sudden for me and Lisa. There are a lot of people rooting for Lisa. She’s quite openly said that she’s a big girl and she’s doing it for big girls. There are lots of big girls out there and she wants to prove she can dance. Everyone wants to get behind that. She’s just adorable and her bubbly personality is infectious and you can’t help but love her.

Why should people vote Team RiRo on this year’s show?

People should vote for Team RiRo because we’re just fabulous. Lisa is going to have a massive journey on this show and that’s what it’s all about. People are going to see week-after-week that she loves this. Not only does she love it but she’s going to improve and get better. We want everyone to get behind us and see how good she can really be.

‘Strictly Come Dancing’ returns to BBC One on Friday 5th and Saturday 6th October 2012. You can follow Team RiRo on Twitter @RobinWindsor and @RealLisaRiley