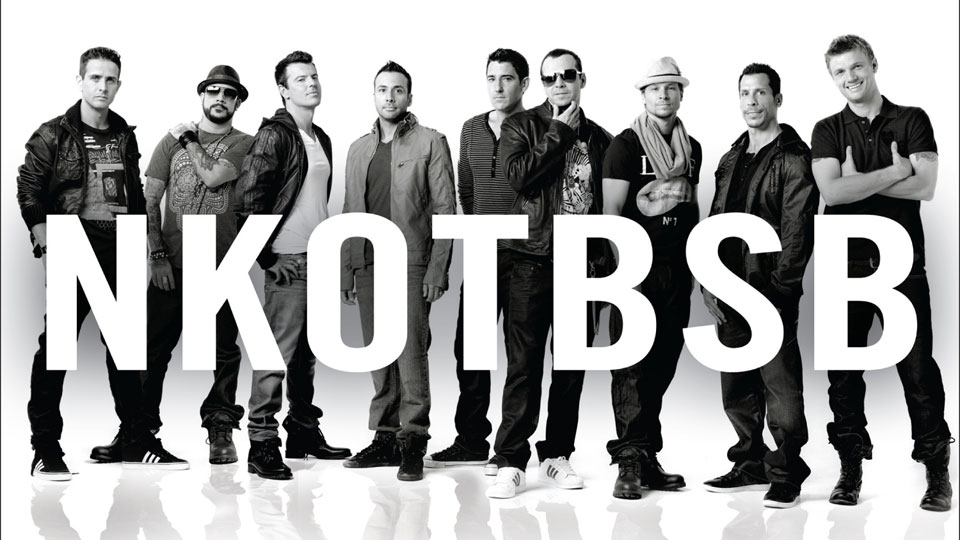 Boyband fever is taking over the world at the moment with British talent such as The Wanted and One Direction topping the charts in the US. 26 years earlier though it was New Kids On The Block that ruled the world before handing their boyband crown over to Backstreet Boys in 1996. New Kids On The Block called it a day in 1994 leaving it 14 years until they reunited. Backstreet Boys on the other hand have been going since 1993 and have taken one hiatus in their careers in the early 00’s before Kevin Richardson decided to leave the group. Carrying on as a foursome the group has had limited success since.

In 2010 New Kids On The Block and Backstreet Boys performed together and after receiving a positive reaction they formed super-group NKOTBSB and set off on tour together in 2011. A collective greatest hits featuring two newly recorded tracks was released and now NKOTBSB are taking their show across the world. Last night we caught the boyband legends as they performed the last date of the UK leg of their tour.

Nostalgic was definitely the best way to describe the NKOTBSB show. As we piled into The O2 Arena along with a largely female audience, the excitement was bubbling as people began to take their seats. For some fans they were seeing both groups for the first time whilst others had clearly been fans since the beginning. We were somewhere in-between remembering both groups as part of our childhood and shaping our idea of what good pop music should sound like.

Arriving on stage at 8pm NKOTBSB performed on an elevated platform which lowered down allowing them to move around their impressive stage. As Coldplay’s Viva la Vida played NKOTBSB performed a mash-up of their songsSingle and The One. Immediately the super-group hurtled down the long catwalk stage towards the circular stage at the rear. For some fans the sight of their idols was too much with screaming and tears a key feature of the night making it really feel like the 90s.

From that point on the two boybands alternated on the stage for the first part of the show. Surprisingly this worked very well with the crowd getting into the rhythm of the show with ease. At the end of each song the lights went down and it actually became fun trying to figure out where the boybands would enter onto the stage. From NKOTB we heard hits such as their 2008 comeback Summertime, The Block’s Dirty Dancing and classic You Got It (The Right Stuff). Backstreet Boys selected The Call, early hit Get Down (You’re The One For Me) and Larger Than Life as their first songs of the evening.

After alternating for the first third of the show the boybands then took it in turns to perform longer sets consisting of several tracks. This also gave them opportunity to utilise The O2 Arena to the fullest. Backstreet Boys entered into the audience to find girls to take on stage and sing I’ll Never Break Your Heart whilst NKOTB ran up-and-down the arena stairs singing Tonight and hugging their adoring fans.

Highlights during this portion of the show came thick and fast. For NKOTB Joey McIntyre stole the show with an incredible vocal on Please Don’t Go Girl and classic hit Step By Step got the audience singing and dancing along. For Backstreet Boys the highlights were Show Me The Meaning Of Being Lonely and the classic Quit Playing Games (With My Heart).

Performing two longer sets each the boybands then alternated once again until they all appeared on stage for new track Don’t Turn Out The Lights. It was at this point you could see the genuine chemistry between the 9 men and Backstreet Boys shared the news that AJ was going to be a father and that they were recording a new album with original group member Kevin Richardson returning to the fold.

For the encore Backstreet Boys performed Everybody (Backstreet’s Back) and NKOTB performed monster smashHangin’ Tough. Then both groups returned to the stage to perform a mash-up consisting of Queen’s We Will Rock You and their encore songs.

What really impressed us throughout the show was that both bands sung completely live. They sounded absolutely fantastic with Jordan Knight and Joey McIntyre taking care of the majority of lead vocals for NKOTB and Backstreet Boys sharing vocal duties a bit more equally with Brian Littrell and A.J McLean pulling off some impressive vocals. Howie Dorough got the opportunity to sing more lines as he picked up lots of Kevin Richardson’s lines whilst Nick Carter clearly loved the screaming attention he was getting from the women in the audience. All 9 men were in great shape and managed to pull off some serious dancing over the course of the set. Donnie Wahlberg proved to be NKOTB’s most memorable member as he ripped his shirt off revealing his toned physique and treated us to a few of his trademark raps. Danny Wood and Jonathan Knight provided solid backing vocals and were beaming throughout the show.

As confetti sailed down from the ceiling and the 9 men took their bows it was clear that there’s still a lot of love for both NKOTB and Backstreet Boys. The show was one of the best pop shows we’ve ever seen and the energy was nothing short of incredible. From the fans going crazy to NKOTBSB giving it their all, it really was a show to remember. In the near 2 and a half hour set both groups reminded us of how good pop music used to be and we felt incredibly nostalgic. We hope this isn’t the last time we see both bands performing together and we’ll certainly be first in line for tickets if they come to the UK again.

In this article:Backstreet Boys, New Kids on the Block, NKOTBSB, The O2