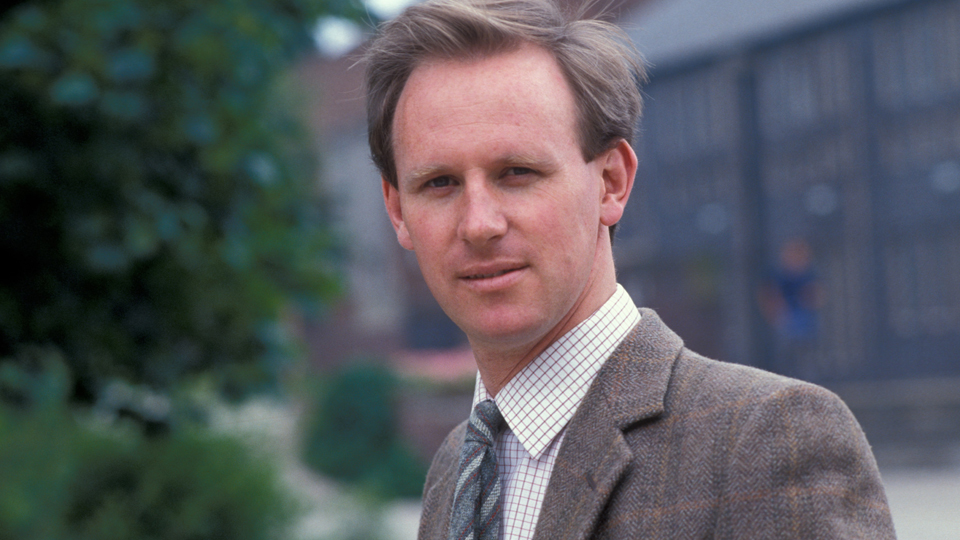 Peter Davison is one of the best-known faces on British television. From his early success in perennial favourites All Creatures Great and Small and Doctor Who, through to more recent roles in At Home With the Braithwaites and The Last Detective, Peter has undertaken many leading roles over the last three decades.

EF recently caught up with him to ask about his part in the fondly-remembered surreal comedy drama A Very Peculiar Practice. We found out about how he thought he’d flunked the audition, what it was like filming in Poland and what he made of those terrifying nuns.

Peter, how are you today?

So A Very Peculiar Practice. What’s your abiding memory of the show?

It was a great time. It was the first thing I’d done that had one director and one writer – and it had a fantastic script. We had enormous fun. It felt like we were doing something special. The first series was filmed at Birmingham and Keele Universities. Nobody knew what we were doing of course, and the students just looked at us with a kind of cynical eye. By the time we did the second series they’d seen it on the telly and loved it!

It was shot on a working university campus?

It was. And we used a lot of students as extras, for a bit of extra money.

I’m sure they appreciated that!

Even more! So how did you get the part of Dr Stephen Daker?

Just in the normal way. I was sent the scripts and went up for an audition… I think the director was profoundly unimpressed with me!

In the interview they always say to you, “What do you think of the scripts?” and, “Do you have any problems with it?” When you go down for auditions you’re desperately thinking of something intelligent to say, so I said something about one of the scripts – I can’t remember what it was now – but the director sat there and looked at me and said: “Well I completely disagree with you!” (Laughs)

I left thinking I really wasn’t going to get the part; but then by the time I got home I was offered it. It was one of those strange things. I really wanted to do it because it was different to the things I’d done before.

Do you feel you got off on the wrong foot with director David Tucker?

Only initially at the audition. We’re now very good friends. I saw him only last Sunday. So we’ve remained in touch, and he directed a couple of episodes of The Last Detective – but it was just an interesting start to the show! (Laughs)

You’re playing an earnest young GP on a university campus. You’re essentially the straight man in a surreal comedy – is that fair?

I think that’s fair, yes. I’m the straight man surrounded by lunatics. I never thought of that as a lessening of the part in any way. I was the audience, if you like – the normal person stuck in the middle of this strange and bizarre world. I always thought of it as a great ensemble piece.

Oh absolutely. Graham Crowden and David Troughton give wonderful comic performances as Jock McCannon and Bob Buzzard. Were they fun to work with?

Oh, enormous! David Troughton is fantastic. He never thinks he gets it right, though. He’s terribly modest. He’s almost Bob Buzzard-like in his strange way with his obsessions about: “Oh no, that was no good. Let’s do it again, let’s do it again”.  You have to tell him, “No, it was brilliant!” (Laughs)

It comes across as very spontaneous. Bob Buzzard’s manic highs and lows are a joy. I love the team meetings, especially in the second series, when you’re in charge, and you’re having to keep the lid on Bob Buzzard’s mania and Jock McCannon’s flights of fantasy. Wonderful scenes!

(Laughs) Yes, Graham Crowden was brilliant too. Everyone was very good around me, which made it all the better.

What did you make of the nuns?

Well, [the writer] Andrew’s theory is that everywhere you go in life there are always two nuns just around the corner. As he developed this theory the nuns became more and more bizarre in their behaviour. But it’s true! (Laughs) When we were filming I’d just been out and there were two nuns hanging around at bus stops or in minis – it’s a great truism.

I almost always see nuns in Marks and Spencer.

Yes! They hunt in pairs, there’s no doubt about that.

I loved it. I think that’s why, after our initial meeting, I got on with the director David Tucker very well. I was in tune with the humour – I got the feel of it. It’s a different thing: it’s a drama/satire/comedy and as such it had to be pitched exactly right.

Let’s talk about the writer, Andrew Davies. He already had a substantial body of work behind him, but he’s now considered one of the country’s finest screenwriters. Was there a feeling he was a bit special at the time?

Yes, he was. He was still at that time working at a university, he was a lecturer at Warwick University. It was only after the first series that he became a full-time writer. But it was one of the few things he’d done that was an original piece of work. He loves adapting things. He’s brilliant at that. In the first series in episode five, I think, there’s a character called Ron Rust who’s writing a series for the BBC because he owes them £17,000 and that is actually Andrew Davies! He did in fact owe the BBC £17,000. He was commissioned to do an adaptation of something, and a couple of months in, he said, “I can’t do this, it’s terrible,” and they said, “Well, we’ve paid you.” And so he said, “Well, I’ll write you a series then.” And from that came one of the very few original pieces he’s done. It’s a shame he doesn’t do more, but he just loved adapting.

You were in Harnessing Peacocks later on that Davies had also adapted.

That’s right, yes. He’s just very good at that. He loves the idea of taking existing characters and exploring them and playing with the concept.

How was A Very Peculiar Practice received at the time?

Very well. It was almost a cult show. It’s well-remembered even now. When I meet people and they talk about things they’ve seen me in, A Very Peculiar Practice is always very high up on the list.

Do you still get fan mail about it?

I don’t think it’s ever really been a very fan-mail-oriented show. I have had some, but it doesn’t compete with Doctor Who in those terms, or even All Creatures Great And Small. But it was a success in that the university generation was coming through at that time and people had been to university and indeed after that went to university – it’s a common experience. So many people have said, “Was it based on my university?” and it seldom was. Essentially Warwick University was the blueprint. We tried initially to film in the University of East Anglia, but we were refused permission on the grounds that it wasn’t acceptable. (Laughs)

It was four years later after the end of the second series that you filmed A Vert Polish Practice. Did you take any persuading to reprise your part as Dr Daker?

No. Of course it was Andrew’s idea originally. He met up with Joanna Kanska who plays Greta in the series. She was telling him about the new Poland that was emerging, and he got interested in the idea and started to see what had happened to those characters.

Was it shot over there?

Yes, it was shot in Poland.

What was that like? The Poland of the early 1990s?

I’d filmed something there, oddly enough, about four years before that. It was very poor, and lots of people driving around in Polski Fiats. Then when we went back, there were an extraordinary number of Mercedes dotted around. Nobody could quite understand where they’d got the money to buy these things. It was at that time that Poland was run by revolutionaries and black market gangsters. But it was exciting, because they’d suddenly got their country back. The various forces were fighting, not literally, for advantage over the other: it was just a very interesting time.

That comes out in the story, about finding medical drugs and supplies.

Things like that did happen. Where you weren’t able to get something. Then somebody would have a word with somebody else and suddenly these things would just appear! (Laughs) Which happened in the story with the hospital stuff. It was an extraordinary place. Joanna’s Polish so she was our guide and translator.

You had a very good rapport with Joanna, but also with Amanda Hillwood in the first series. Possibly a mean question – did you prefer working with one in particular?

(Laughs) Not really! I liked Joanna, I thought she was brilliant. When she started she could hardly speak any English. She could communicate, but her lines she had to almost learn phonetically. But Amanda was great too. It was a less passionate relationship with Amanda. She was always playing these games with me. The way her character was was slightly more distant and detached, and I couldn’t break the shell. With Joanna it was more like a shouting match.

Is Joanna like her character Greta in real life, dare I ask?

She can be, yeah! (Laughs) Anyway…

You’ve looked back on the series because you’ve recorded a commentary for a couple of the episodes on the DVDs. Do you think it stands up?

The first series is a satire on university life. The second series, it always struck me, was a satire about the way education was going; which was something that was very close to Andrew’s heart.

That was the political edge, with the callous Vice-Chancellor and the students striking over unfair hikes in rent prices.

Would you ever take up the part again, if Andrew Davies wrote another script?

I suppose! As a matter of policy I’m not against revisiting parts, it’s something I’ve done before. I probably would. I’m sure if Andrew wrote the script it would be a brilliant script. It wouldn’t happen, but as a theory, yes I would!

What do you have coming up?

At the moment I’m still in a musical in the West End in London called Legally Blonde which I’ve been in for so long I can’t tell you! I’ve another series of Law and Order: UK coming up. I have a reading for a comedy series next week, so that’s on the distant horizon. So things are keeping going, even though I’m just about due for my bus pass.

(Laughs) Well I saw you in Spamalot and you were very energetic in that, great fun!

Good! I loved doing that.

Well, it’s been a real pleasure talking to you. Thanks very much for talking to Entertainment Focus today, Peter Davison.

‘A Very Peculiar Practice – The Complete Series’ is released on DVD by Network DVD on 10th October 2011.