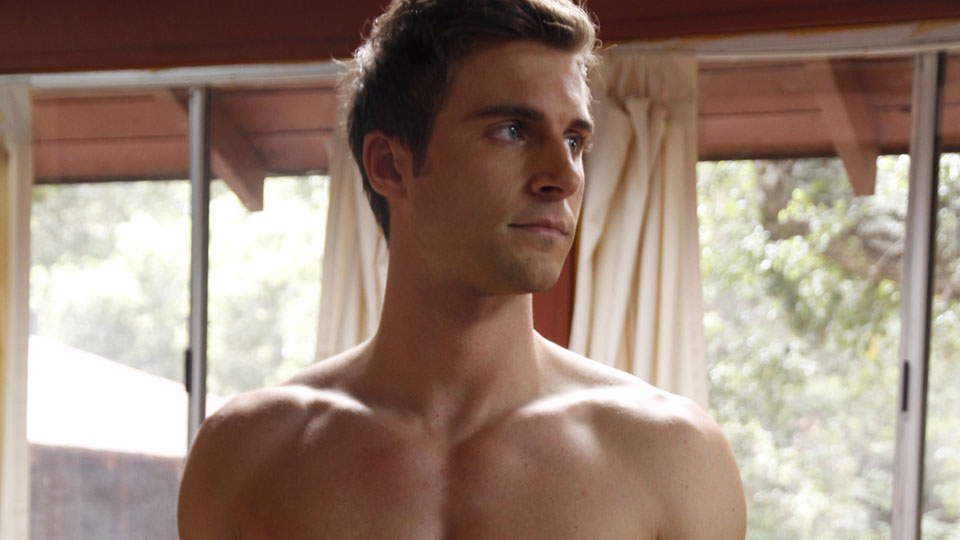 If you’ve been following our Gay Focus section in recent weeks you can’t have failed to notice that we’ve developed a pretty huge crush on Aaron Milo.

Aaron stars as Benji, one of the new characters that stirs things up in the fourth instalment of the Eating Out series Drama Camp which is out on DVD this week.

We caught up with Aaron to talk about his experiences making the movie, find out what it was like to join a well-established series and discover how he keeps those might fine looks in check.

How are you doing today?

Great, thank you!  I just had a nice relaxing weekend in the desert.  We had the premiere of the fifth Eating Out: Open Weekend in Palm Springs, CA on Friday night.  The best thing to do in Palm Springs is lay poolside with a margarita in hand.  And so I did.

‘Eating Out: Drama Camp’ is coming to DVD in the UK. Tell us about the movie.

If you’ve ever been to summer camp before, you know that a lot of drama can go down in a short 2-week span.  Think of all that drama blown up in your face with a hot crew of camp-mates, a whole lot of testosterone, and sexy situations.  Basically…Glee…with less singing, more skin, and jokes that only Eating Out could get away with.

You play newcomer Benji. What do we need to know about him?

He’s genuinely a well-meaning acting student going to drama camp for the experience, and just so happens to fall for an already taken fellow camper (Zack played by Chris Salvatore from Eating Out:  All You Can Eat).  Benji isn’t out to destroy any relationships, he just has a hard time expressing his feelings in an up front and honest way.  He might try and get away with what he thinks is a little white lie that isn’t so little.

This is your feature film debut. What was it like to be the new boy on set?

The first couple days of shooting I was pretty nervous and kind of fake navigating to where I thought I should be and when.  There were a couple of us who were pretty new to the filming process.  Luckily, the veterans and crew on set were super professional and welcoming to questions from a complete newbie.  I can’t speak highly enough of our director Allan.   He made sure that the on-set demeanor was always comfortable and safe for us to express any concerns and we always had an open dialogue with him.  Once I had the basics down and learned that comfort food (chocolate and Diet Coke)  was always sitting at a table within arms reach, I was a happy camper and filming was smooth-sailing.

What was it like working with Chris Salvatore and Daniel Skelton?

The little fear I did have of joining a cast that had already had some history together was quickly extinguished when we all sat down for our first read-through of the script.  Chris and Dan are so funny together, and they happen to be great friends in real life so there was always some trickery and good fun happening somewhere on set.

How did it feel to be joining such a well-loved series of movies?

It was really exciting, but I really had no idea what that would mean for me specifically.  Allan has really built a loyal fan base for the series.  Everyone seems to have their favorite character from the series that they want more of.  Then here comes Benji, the new guy basically causing drama between the token couple that everyone loves from the last movie.  The fans seem to “get it” and the feedback has been great.  I think they have really embraced the new additions to the cast.

Tell us about your audition for the film. How was that experience?

It all happened really fast.  A friend asked me if I had heard about Eating Out and told me that he knew they were still in the casting process and thought that I should give it a shot.  I sent in a video audition the next day after hearing that they still hadn’t cast a couple main characters.  A couple days later after a series of fortunate events, I was offered the role of Benji.  True Hollywood story.

Some of your scenes in the film are pretty risqué. Did you have any reservations about them?

I was for sure a little nervous, but I wasn’t going into it blindly.  I had seen the other movies in the series and knew what I was getting into.

We’ll be seeing you in the next instalment of ‘Eating Out’. What can fans expect?

A gay-cation to remember.  A crew of sexy new boys, a couple hilarious cameos from Eating Out veteran actors, and an epic bed romp where Allan fits as much of the cast onto one bed as possible.

You grew up doing theatre. What’s the biggest difference between theatre and film as an actor?

As a film actor, the work is a lot more in the subtleties in facial expressions, and in theatre you are exaggerating your facials and vocal inflections and volume intensity much more.  There is nothing like having a live audience to work off of, but I like the “real-life” nuances that you can play with as a film actor.

It hasn’t gone unnoticed that you’re a very good-looking guy. What grooming tips do you have for our readers?

Haha, grooming tips.  Let me go brush my teeth real quick.  OK, well I’m no GQ writer, but one of my friends introduced me to this spectacular little shaving device called “The Perfect Stubble.”  I hate shaving every day, so this electric shaver gives the benefit of not having to razor my face down to the skin but allowing me to keep a clean and sexy looking five o’ clock shadow indefinitely!

I just signed on to model for a comic book character in an adaptation of Sleepy Hollow.  It’s going to be an 8-issue comic book mini series that is scheduled for release Fall of 2012, with talks of a possible film based off the comics.  Film editing is a hobby of mine… so I’ve put my creative energies to use and recently launched a web series.  It’s basically a “reality vlog” of my life since moving to Los Angeles.  Elements of my life, mixed in with some scripted humor.  You can check it out at youtube.com/madeinmilo, or find me at facebook.com/madeinmilo.

‘Eating Out: Drama Camp’ is available on DVD now through TLA Releasing.

Advertisement. Scroll to continue reading.
In this article:Aaron Milo, Eating Out: Drama Camp