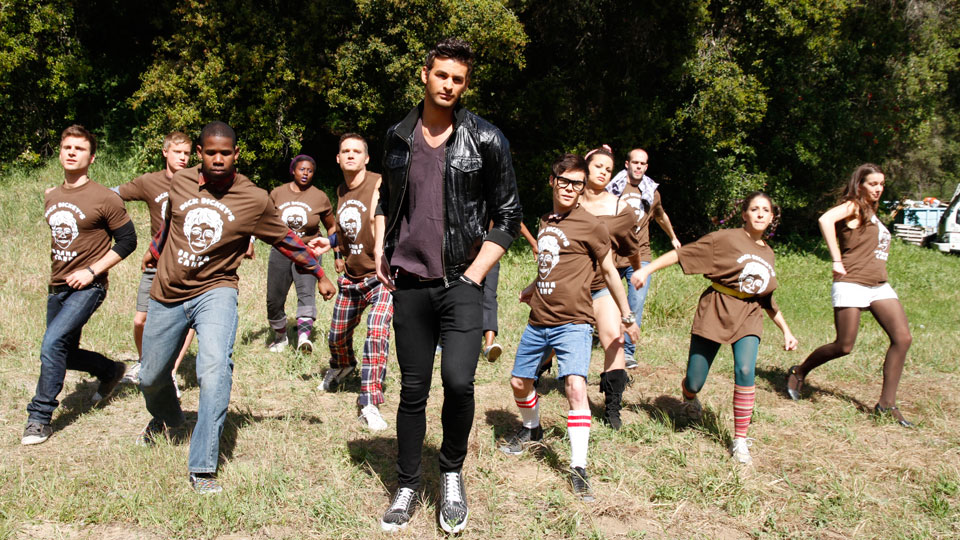 Zack (Chris Salvatore) and Casey (Daniel Skelton) reach an unexpected crossroads in their relationship when they head off to Dick Dickey’s Drama Camp for the summer. On the way there they bump into Benji (Aaron Milo) who Zack finds himself instantly attracted much to Casey’s dismay. Once at the camp Zack and Benji are cast as the lovers in a re-working of The Taming Of The Shrew throwing a curveball straight into the middle of Zack and Casey’s relationship.

Eating Out: Drama Camp is the fourth instalment of the popular Eating Out series written and directed by Q. Allan Brocka. Continuing the story of the third movie Eating Out: All You Can Eat fans of the series will be pleased to see what happens next with Zack and Casey. When the film opens it’s quickly established that the couple are experiencing a slump in their relationship. From the moment Zack meets the gorgeous Benji everything is turned on its head as the sexual tension between the two bubbles under despite Benji claiming to be straight.

Taking the series to a new setting is a smart move by Q. Allan Brocka giving it a new energy. Outside of their little coupled bubble Zack and Casey are forced to deal with their unhappiness and decide what they really want from their relationship. Dick Dickey’s Drama Camp gives the perfect backdrop for some more gross-out comedy, sexual encounters and quirky set-ups.

All of the new supporting cast are superb but it’s Kroell and Milo that stand out. Kroell is better-known as a model but is simply adorable here as the naïve love-struck Beau who develops a fascination with Casey. Milo on the other hand is so ridiculously good looking that we got a hot flush when he appeared on screen. His chemistry with Chris Salvatore sizzles on screen and Milo’s acting skills prove to be as good as his looks.

Of course Chris Salvatore and Daniel Skelton once again make a great onscreen team. In this movie they don’t spend as much time together but they recreate the chemistry that made them such a hit in the last movie.

Eating Out: Drama Camp is the strongest movie in the series yet with a smoking hot cast, an engaging storyline and enough sex to keep you hot under the collar. We like to think of these movies as the gay equivalent to American Pieand they certainly give that series a run for their money in the saucy stakes. With a fifth movie, The Open Weekend, already in the can we’ll be getting another serving of Eating Out within the next few months. Until then you can keep rewatching this movie and swooning over all the hotties whilst declaring Aaron Milo to be your new crush (just like we did!).